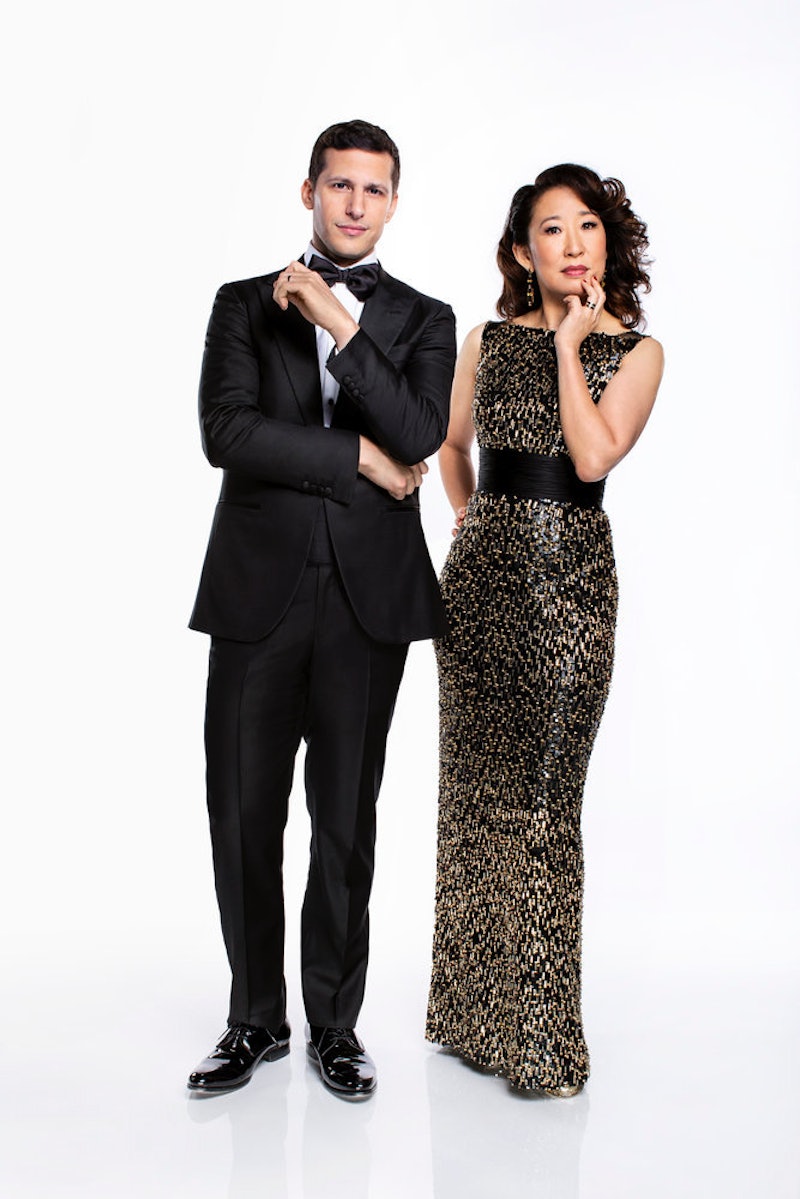 For invested viewers, every awards show is an ordeal — you need food, drinks, a set of winner predictions in hand, and perhaps some tissues for any particularly emotional acceptance speeches. To adequately plan the first big night of the season, you'll also need to know how much time you're working with. Don't worry — I'm here to help you go into this Sunday evening knowing how long the 2019 Golden Globes will be, and what red carpets you'll want to tune into.

This year's Golden Globes ceremony begins at 8 p.m. ET, and is scheduled to end three hours later, according to NBC. The 11 p.m. end time is probably around where the show will actually roll the credits — the production is usually pretty adamant about playing people off the stage when speeches start running long enough to push schedule back — but there's always a chance things might run late. It is live television, after all.

One hiccup that might make the timeline a little dicey is the NFL game taking place on the same network directly prior to the Globes — the Philadelphia Eagles face off against the Chicago Bears for a 4:40 p.m. ET wild-card game. If the game happens to go into overtime, or run late for any reason, it's unclear whether NBC would continue its broadcast into the Globes' time-slot, or cut it short to stay on schedule. Hopefully, the game wraps up promptly and fans of both events can see each in their entireties and Globe fans won't be up all night watching. Bustle's request for comment from the network about its plan for that particular situation was not immediately returned, but you can probably bet on the game running in full.

Aside from the three-hour ceremony itself, there's plenty of supplemental coverage both before and after the Globes, if you really want to examine every dress, tuxedo, and surprising snub.

Red carpet coverage begins long before the ceremony starts. E! Countdown to the Red Carpet starts super early at 4 p.m ET, and will roll straight into E! Live From The Red Carpet from 6 p.m. to 8 p.m. And after the Golden Globes telecast concludes on NBC, Busy Tonight will have a live after-party special at 11 p.m. back on E! So, theoretically, if you watch all the red carpet coverage you can get your hands on, plus the post-show special, you're in for about eight hours of programming. Whew.

That's a long night, but those who are super invested in the celebration will have a ton to look forward to. Even if all you're tuning in for is the ceremony itself, it's shaping up to be a good night. Andy Samberg and Sandra Oh are hosting, which is basically a second Christmas. And while no one knows for sure which nominees will turn into winners and grace the stage with an acceptance speech, the incredible list of presenters is more than enough to get anyone excited.

No matter what your plans are, settle in for at least a three-hour evening — and a longer one if you're really aiming to soak up the glitz and glam.