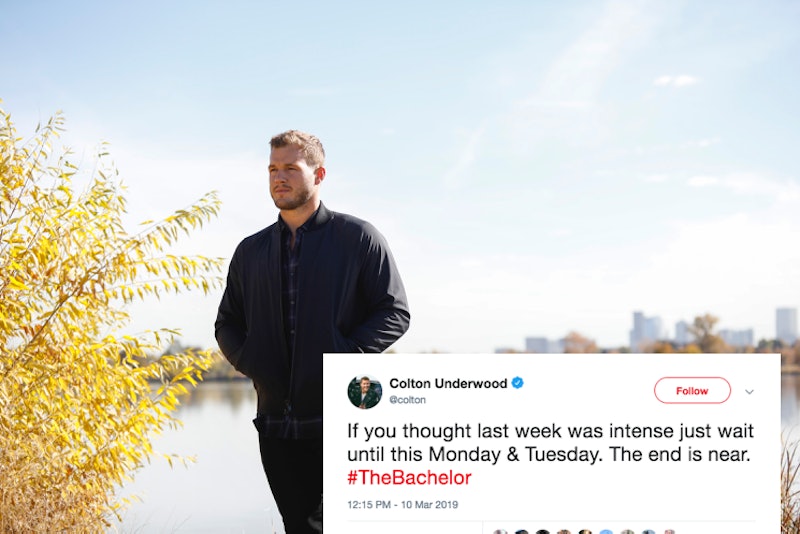 Is there ever such a thing as too much content for any particular season of The Bachelor franchise? Ordinarily, the answer is always a resounding no. (You know you all live for the drama.) But in recent years, this series has really been putting that question to the test by mixing up its finale format and doubling down on the content shown. Given everything that has gone on this season, it's only normal to wonder how long Colton's Bachelor finale is, since it's hard to predict how the producers can ever come back from that fantasy date fiasco.

Last year, Arie Luyendyk Jr. season of The Bachelor ended in a shocking twist when he decided to break up with his final rose winner Becca Kufrin on-camera in order to be with his runner-up Lauren Burnham. Not only did fans get to see the breakup take place, but Arie then proceeded to propose to Lauren on live TV during the show's After the Final Rose special. It was truly an unforgettable — and sometimes heartbreaking — season, but Arie's change of heart wasn't the only change up to happen to the show itself.

Traditionally, each Bachelor or Bachelorette season concludes with a two-hour season finale, immediately followed by an hour-long After the Final Rose special, which informs the audience of where the perspective couple are today — or if they're even still together. But thanks to the extra drama from Arie's season, the producers opted to approach the finale in a brand new way. Rather than air the two segments separate, they combined the finale and the ATFR together, so that the live audience and Chris Harrison were watching the finale alongside viewers. This allows Harrison to interview various people throughout that time period and weigh in on their thoughts about what's going on.

The idea may seem fun in nature and perhaps for Arie's season it was necessary due to all the ground they had to cover, but this format has continued on into Becca's Bachelorette season and will happen again for Colton as well. It's a different approach to watching the finale, but not really all that necessary. Personally, it can be jarring to switch back and forth from the live special to the finale and the extra interviews can sometimes kill the momentum when all we really want is to find out what happens to the lead. This change up has also led to the finale doubling in length. The Bachelor finale no longer eats up three hours of your time on a Monday night, but rather airs for two hours over the course of two separate evenings, giving you a grand total of four hours of Bachelor finale content. It's a lot.

That's right, folks — Colton's finale will air intermittently alongside the After the Final Rose special throughout both Monday, March 11 and Tuesday, March 12 from 8 p.m. to 10 p.m. EST. So if you had any plans over these next two days, you might want to think about canceling them. Because if Colton's season is truly as shocking as Harrison is making it out to be, you won't want to miss a single moment.