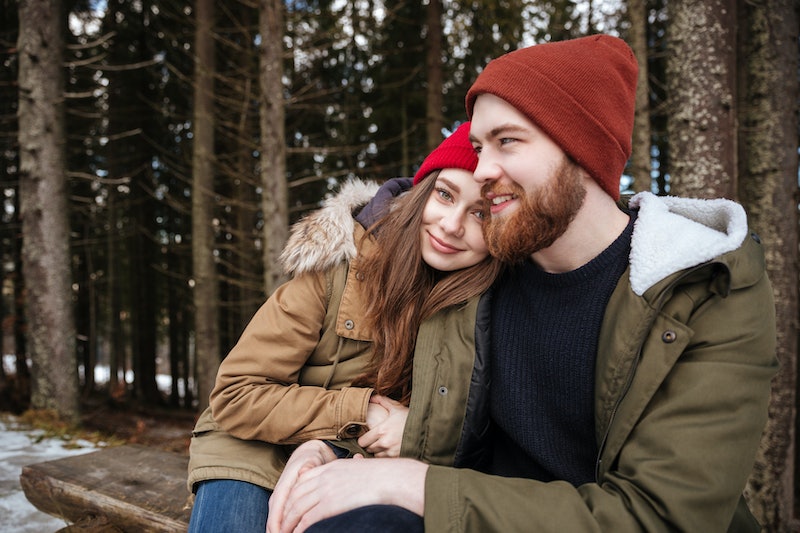 It never occurred to me to wonder, "How many relationships should you have?", but apparently people do. Maybe it's just that age 30 is suddenly in sight, but my friends are starting to talk about relationships in a finite way— like you run out if you reach a certain number or something. Or like there's an ideal number that you don't want to go beyond. I thought we got over this when we decided that your number of sexual partners shouldn't matter, but are we really now starting to tally our romantic relationships?

"I have found that some of my clients who have not had many relationships tend to be most insecure about it," relationship therapist Aimee Hartstein, LCSW tells Bustle. "When they run into problems or fighting with their partners their first thought is that it is because they don’t have enough “experience”. And they often assume that if they had had more relationships then this one would be going better."

Or perhaps people are just curious — like they are about other people's sex lives. A survey of 2,000 adults by dating site eHarmony found that the average woman has four disaster dates, seven sexual partners, will kiss 15 men, and have two long-term relationships. To which I say: I am three average women, apparently. At least three. So how many relationships should you have?

What Counts As A Relationship?

Firstly, how do you even tell what counts as a relationship? I've had friends with benefits that lasted years and I wouldn't count, but other friends include guys they've hooked up with five times. And both ways are totally fine. There's no set rule for determining what is or isn't a relationship — it's about the significance for you.

Have As Many As You Effing Want

But even more than that, there is no right number of relationships to have? Maybe you adore falling in and out of love and will do it dozens of times, maybe you're still with your high school sweetheart or have never dated at all. There are no "shoulds" or "musts" or maximums or minimums. It's all about what works for you. I don't know anyone whose life has unrolled just as they imagined it would when they were younger.

"I don’t actually think that there is a right number of relationships," Hartstein tells Bustle. "What I explain to people is that every relationship is different. Even if they had had 10 other boyfriends [or girlfriends] before this one, they would still be facing unique challenges and situations with each person. I also think the everyone’s temperament is different. Some people are cut out to have relationships that are few and far between and others are cut out to date dozens of people! Neither is better or worse." Amen.

Not only is there no right or wrong number of relationships to have, it's not like the amount of relationships you've had so far is predictive of anything else. Just because you've been in six relationships doesn't mean number seven is definitely going to be the one. Just because you've only had one for the first 30 years of your life, doesn't mean you're only going to have one in the second 30 years. And just because you have or haven't felt the need to be monogamous before, doesn't mean you will or won't again. The idea of "should" or "shouldn't" implies that you need to do date a certain number of people to achieve something, but in reality there's no correlation.

I dated a lot as a teenager, then was single for eight years, then dated a bit, then met my girlfriend of the past year and a half. At no point did the number of people I'd been with predict what would happen next.

So how many relationships should you have? Zero. Or 15. Or three. Or whatever you damn well please.