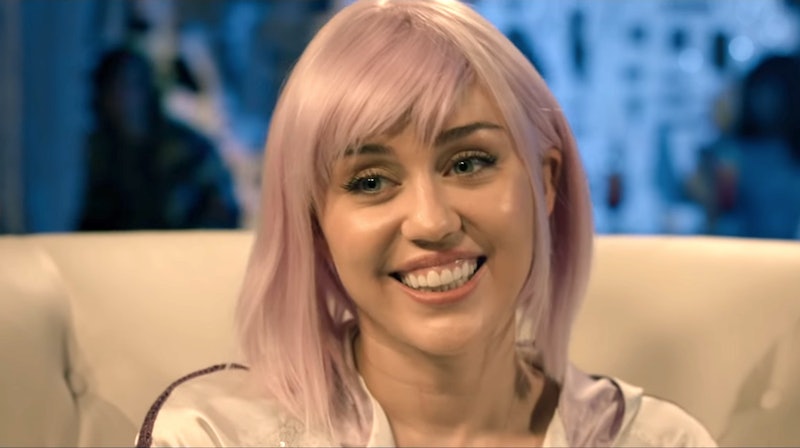 Spoilers ahead for the Black Mirror Season 5 episode, "Rachel, Jack, and Ashley Too." As a show about the often terrifying ways technology can and does control our lives, it's rare that Black Mirror gives its characters any true agency. So that the show chose to break this tradition with Miley Cyrus' Black Mirror episode — a story about three young women (and one AI) banding together to reclaim their power — is significant. Pop culture has long fed into the damsel in distress trope, which dictates that female characters must be saved by stronger (read: male) ones, but in Season 5's "Rachel, Jack, and Ashley Too," the women are their own heroes.

In it, Cyrus stars as Ashley O., who to the outside world is pretty much the archetype of a stereotypical female pop star: she sings upbeat but cliché songs about falling in love and living her dreams, dances onstage in skin-baring spandex, and has a platform built on preaching self-love and empowerment. As she says, "It's really important for people to feel like they're in control of their own destiny and that means having the confidence to be who you want to be." But the irony is that Ashley doesn't actually have that power in her life, because her aunt Catherine regulates every aspect of her existence. In fact, she sees Ashley not as a person, but a commodity: after Ashley begins to rebel against her wishes, she drugs her into a coma, mines her brain for song ideas, and concocts a plan to kill her and replace her with a hologram performer — one that will obey her every command and never get sick or tired.

If we were still abiding by antiquated gender stereotypes, this is when some heroic dude would swoop in to save Ashley, as has happened in countless Disney films (think Snow White and Sleeping Beauty) before Black Mirror. But instead, it's super fan Rachel, her rock-loving sister Jack, and Ashley Too — an AI doll built with a copy of Ashley's consciousness — that come to the real Ashley's rescue. And not only do they take down a number of much larger, adult men in order to do so, but they each cleverly push back against the one-note characters women are often reduced to.

Like Ashley O., Rachel and Jack at first appear to reinforce these archetypes: Rachel is the timid nice girl, Jack is the angry, angsty rebel. But with the help of Ashley Too — who shows that yes, you can sing pop songs and still say f*ck — they're able to look beyond the limited terms society defines them as and embrace the complex, multifaceted young women they are. They're also not weak or helpless as teen girls have historically been portrayed, but strategic and resourceful, easily outsmarting the bulky men guarding the comatose Ashley.

So while "Rachel, Jack, and Ashley Too" is overarchingly a story about the way female musicians are pigeonholed and exploited, it's also a powerful tribute to female bravery and strength. Rachel and Jack have never faced anything as high-stakes as saving a famous pop star from her mad, controlling aunt, but they rise to the occasion with little hesitation and upend several tropes in the process. Here, there are no damsels in distress — only damsels who are more than capable and in control of their own destinies.