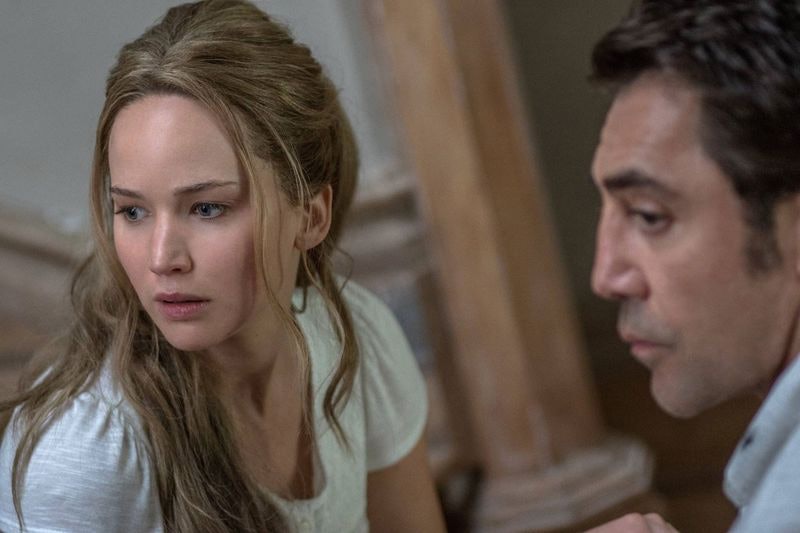 One of the first things audiences may notice about mother!, director Darren Aronofsky's mind-bending horror-thriller, is the age gap between its two stars, Jennifer Lawrence and Javier Bardem. Despite the fact that Bardem is about 20 years older than Lawrence, the duo plays a married couple in the film. The huge gap might make some heads turn, especially since Lawrence is, in really life, dating Aronofsky, who is Bardem's age, but the characters' age difference is just one of the elements that suggests a grander theme of uneven relationships between men and women in mother!

By now, audiences might be familiar with how the general premise of mother! is only a surface story for a number of thematic layers. The movie's plot of a home invasion gone epically wrong is only a front for its biblical metaphor, environmental message, and commentary on artists and the Hollywood fame machine. But woven through each of these interpretations is the unifying element of how women are mistreated by men. Whether it's in mother finding her desires ignored, or her being unappreciated as a homemaker (or as a literal mother), the film addresses how women's emotions are frequently seen as less valid in both today's society and the world historically.

Spoilers ahead! Unsurprisingly, the biblical aspects of the film are the elements that contain the most misogynist views on women. Historically, Judaism, Christianity, and the Bible itself haven't been the most progressively feminist, to say the least. But within mother!'s allegorical storytelling, the needs of women are consistently sidetracked to favor those of men. Mother, who represents Mother Earth, and the Virgin Mary, constantly has her wishes ignored for the benefits of Bardem's God-like character's emotional well being and increased ego. Her house is destroyed for Him's growing need for praise, and even her child suffers at the hands of Him's creations.

In other biblical tales, like Abraham and his wives, Noah and his family, or even God's own plan for his son, Jesus, women are repeatedly cast aside as secondary in importance. One thing mother!'s climax does so well, as disturbing as it is, is consider how Mary must have felt to have her child ripped away for God's "great purpose." Her feelings and needs are rejected in favor of a male God's plan for humanity.

On a separate level from the religious aspects, the film also holds an environmental layer that explicitly connects the Earth with femininity. From the Greek myth of Gaia, to the Hindu Durga, to the goddesses of Wicca, nature and women have held a variety of significant religious and historical connections. Along with those connections always comes a masculine energy of destruction. As the mother! press notes detail, one particular piece of philosophy became essential to the production: Woman and Nature: The Roaring Inside Her, by Susan Griffin. As described on Griffin's website, the book "explores the identification of women with the earth both as sustenance for humanity and as victim of male rage." Mother! producer Ari Handel said in the press notes that the book, "sketched a parallel between how men sometimes treat women and how people treat the planet."

These allusions aren't the only ones at play here, especially when it comes to women being unappreciated. Mother! has an additional layer of commentary on the needs of "creators," the insanity of the Hollywood fame machine, and the unfortunate situation of being married to a seemingly mad man artist. As Bardem's character's need for stimulation, worship, and fame grow, mother quickly loses the battle for his affection, attention, or even consideration. Not only does this reflect the pressures put on women in Hollywood, but mother! acts as a sort of warning for any woman considering dating a filmmaker, writer, or artist in any way. It's almost as if it's saying, "Watch out, you're always going to be playing second fiddle to this genius."

Even beyond that, there's a suggested commentary on how often women's careers are set aside for their partners'. Women are expected to put aside their careers for motherhood, and even when women become mothers, they are taken advantage of as well. Just think about how often women in the workplace earn less than their male counterparts. Or how hard it is for working mothers, or for mothers who have taken time off to raise their children trying to return to the workforce.

Though mother! highlights a a lot of inequality, it's actually doing so in support of a feminist agenda. After all, the presentation of sexism in a piece of art isn't an endorsement of it, and sometimes showing is better than telling in order to make people see the hidden misogyny in our daily lives. As mother is beaten and called a "bitch" and a "c*nt," she's not only representative of the Earth and historical women, but modern women who have to endure such abuse. Still, some viewers have called out the movie, and Aronofsky, for including such intense violence against a woman.

In response, the director toldVanity Fair, "I think it’s important for people to recognize I am not condoning the violence in the movie. Some people might think, 'Hey, it’s messed up.' But we wanted to show the story of the world and how it feels to be her. And what we as a species do to her."

So while the violence is hard to watch, there's actually a lot of anti-sexist commentary going on. It might surprise some that a male writer and director put so many of these layers into a film that, on the surface, is a straight up horror movie. But that's part of what makes mother! one of the most fascinating movies of the year, or ever. If you can stomach the gore, violence, and sadness of the story, there's a lot to be appreciated underneath — and, for women, a whole lot to recognize.