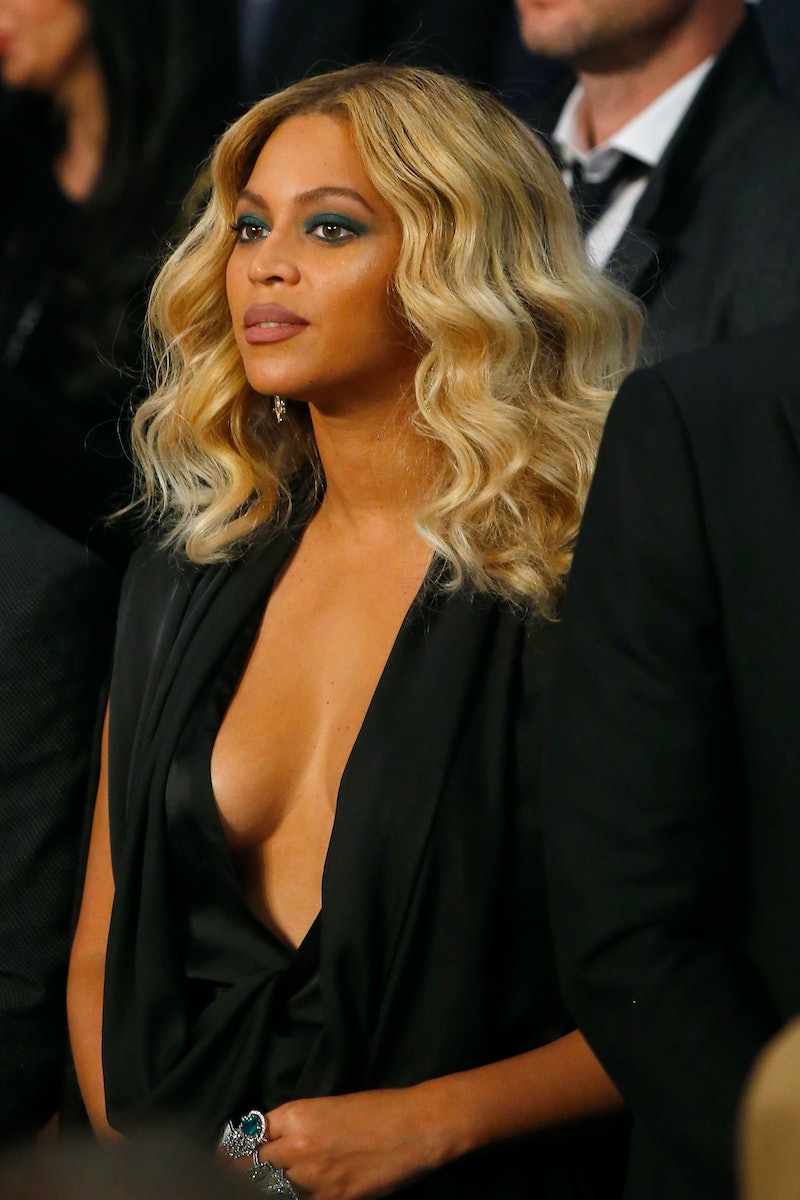 Although becoming a celebrity is a goal for many people in this world, the lifestyle has never much appealed to me. This is primarily because of the pressure to look perfect that Hollywood and celebrity life seemingly put upon people. I mean, if you can't run to the store to grab some milk sans bra, with no filled-in eyebrows, or rocking mismatched socks without making headlines, are you really free to be your own person?

It's not just about the tabloids, either. They will hate you on your "off" days and love you when you lose weight or employ a full glam squad. I think the pressures from yourself would be way harder to deal with. As much as a celeb can smile to the paparazzi, the internal struggle is real. Coping with the so-called need to look "perfect" as an average human being can be incredibly difficult anyway. Doing it while the whole world watches your every move? That must be a whole other kind of crazy.

Although we're lucky to live in the age of social media and outspoken celebrities who care about and discuss social issues, it's still rare for a celebrity to truly open up about the struggles that come with being a celebrity. As one of the most coveted lifestyles in the world, some folks might feel that it's ungrateful for celebs to criticize aspects of fame. But I think it's empowering to know that the people we look up to struggle in similar ways as the rest of us. Here are 11 inspirational humans who've opened up about celebrity culture beauty pressures.

In the 2014 video for "Pretty Hurts," Beyoncé pretends to get plastic surgery, which was meant to be more of a cultural statement than an artistic one. Beyoncé's feminism is outspoken and proud, and as reported by The Mirror, "Pretty Hurts" was meant to be a reflection of that.

In a similar way to Beyoncé, Christina Aguilera uses her own experiences and struggles as a woman in Hollywood to discuss the pressures put on all women on the daily. In particular, women post pregnancy. Speaking to Women's Health earlier this year, she listed all the pressures put on new mothers by the mainstream. "We’re expected to be pregnant, have the kids, breastfeed once we have the babies. And we’re expected to look amazing after baby, right?

"[We're expected to] keep our husbands and boyfriends interested — because we’re supposed to get back to sexy and keep things exciting in the bedroom. There’s such a long list," she added.

Anyone who ever looked at a tabloid during Kim Kardashian's pregnancies likely knows how much pressure is placed on celebrity women to be the perfect moms and still look perfect, too. The struggle is real.

Speaking to MORE, actor Jennifer Connelly went in depth about her life, career, and family. At the end of the interview came her amazing speech against ageism in Hollywood: “We equate beauty for women with youth, and that’s sad,” she said. “It’s a shame it’s so hard for so many of us to appreciate the beauty of an older woman and to accept it in ourselves. I don’t want to erase my history on my face."

That being said, Connelly refuses to judge the women who choose plastic surgery — which is a perfectly feminist move — by adding, "I don’t judge; every woman has to make her own choice."

In an interview with Health Magazine, actor Sophia Bush was directly questioned about "maintaining body confidence in Hollywood." Her answer was detailed and uplifting. "I think it's hard for everyone. Do I think that there has historically been more pressure [in Hollywood than elsewhere]? Yes. Do I think that because of media and airbrushing and social media and Instagram and Facebook and Twitter, that it's now the same for everyone? I think it's crazy. We are so conditioned as women to hate on ourselves all the time, but look at what we can do."

Bush is right. Women — both celebrities and non-celebrities — need to be able to see the greatness in what we can do and how we look. Negativity is stifling, though, no matter how many Instagram followers you may have.

But more specifically, Hayek got real about the pressures that all women face in the light of modern Hollywood. "The amount of pressure on women now, it’s crazy. You have to be much better than your male colleagues, just so you can maybe try and get the same salary as them. And you still have to be a good wife and mother. And now you also have to be skinny, and you have to look 20 when you’re 40. It’s too much. We need to stop with the crazy expectations, give ourselves a break."

Androgynous singer and front woman of Eurythmics has had a wonderful and fascinating career and life. Now in her 60s, the star refuses to be retouched fully in photographs, as she revealed to Yahoo! Beauty in an interview with makeup icon Bobbi Brown. Speaking about the cover shoot for her album Nostalgia, she said, "I just wanted to represent myself at my age in a nice way, obviously. There’s lights and there’s makeup, and there’s a probably a tiny, tiny bit of manipulation here and there. But I said, 'Please, I just want to look as I am.'"

Well known for her charity work, it's no wonder that Lennox wishes to be represented honestly. Her words on feminism in conversation with Yahoo! were particularly inspiring. "[Feminism is] about ideas, passion, commitment, so many other things than just giving money. It’s your willingness to connect with others with issues, instead of being a passive bystander. I think that the women’s movement has so many wonderful things ahead of us. We can see great things happening. But we’ve got many, many miles to walk."

Since Selena Gomez revealed her lupus diagnosis and treatment in 2015, I've grown to think of the Disney star as a pretty solid body image role model. The speech she gave at the We Day conference in California touched not only upon her own struggles, but the pressures she experiences at large. She said, "I'm surrounded by people who are supposed to guide me, and some of them have and others haven't," reported People Magazine. "They pressure me… you gotta be sexy, you gotta be cute, you gotta be nice. You gotta be all these things."

The expectation to be too many things for too many people is seemingly felt by a lot of women in Hollywood, and the world at large.

Lady Gaga appeared un-retouched in the CR Fashion Book circa summer 2015, and the art driven icon's reasoning was totally body positive. “As a 29-year-old girl, at this stage in my pop career everybody goes, ‘Oh she’s getting old,’ and everybody’s so worried about having a perfect body, a perfect face, and perfect hair,” she told E! Online. “When, you know, actually, legacy and longevity is about having some sort of story and footprint to leave in the world when you die, chasing your talent until you’re dead. And that, as an artist, you love your art ’til death.”

Her words are the perfect argument against ageism and unrealistic beauty standards in Hollywood.

In summer 2015, supermodel Tyra Banks spoke out on Instagram against the pressures of the contemporary modeling industry, particularly as compared to her own era of modeling. As Us Magazine reported, she wrote, "Models have so much pressure today. They have to look good on AND off the set. They have to arrive backstage at fashion shows looking and dressed as if they are already ON a runway. They have to be slimmer than slim. Skinnier than skinny. They have to compete with actresses, recording artists, and reality stars for magazine covers and ad campaigns. They have to have tons of followers on social media to book top notch jobs. And they have to do selfies that make them look relatable, but not TOO relatable, because then people may comment that they don't understand, 'Why the heck is THAT girl a friggin' model?'"

Banks added that in her days as a supermodel, she was a size six, and showed up to shows wearing "sneakers, plaid flannel, and bad jeans" before sending "love and hugs to all working, aspiring, and supermodels worldwide." Her insight on the increases in social and media-based pressures put on women was refreshing, to say the least.

Arguably the best British girl group since The Spice Girls, Little Mix are all about #girlpower, and their stance on body shaming only proves it. Speaking to Yahoo! in 2015, the singers preached body positivity and self love. "We just try to forget about any nasty comments really. We like to eat food and so does everybody else, and if we put on weight we put on weight and if we lose weight we lose weight. Everybody has this preconception that you’re supposed to be perfect looking but nobody is perfect," commented Jesy Nelson.

I for one am glad that these glorious girl band members have each other to fall back on through their rise in celebrity.

I've adored Kirsten Dunst ever since watching The Virgin Suicides on repeat at age 16. After my recent Fargo obsession, my love has only grown. In an in depth interview with Town & Country Magazine in 2015, Dunst explained the unfair double standards that actors often have to deal with. "What people expect of an actor is totally ridiculous. It's unfair that an artist is expected to speak really well in public and have skin tough enough to withstand sometimes really hurtful criticism, but also, in order to do the job, be really sensitive and in touch with their feelings. So all you can do is be yourself — just be who the hell you are."

You know that little buzz of happiness you sometimes get when one of your favorite celebrities reveals that they're actually really cool people, too? That's exactly what this list gives me. Far too often, celebrities are put on a pedestal and not allowed to make any mistakes. If we changed that, it wouldn't just be better for them. It'd be better for everyone else as well.

Want more body positivity? Check out the playlist below, and be sure to subscribe to Bustle's YouTube channel for more inspo!