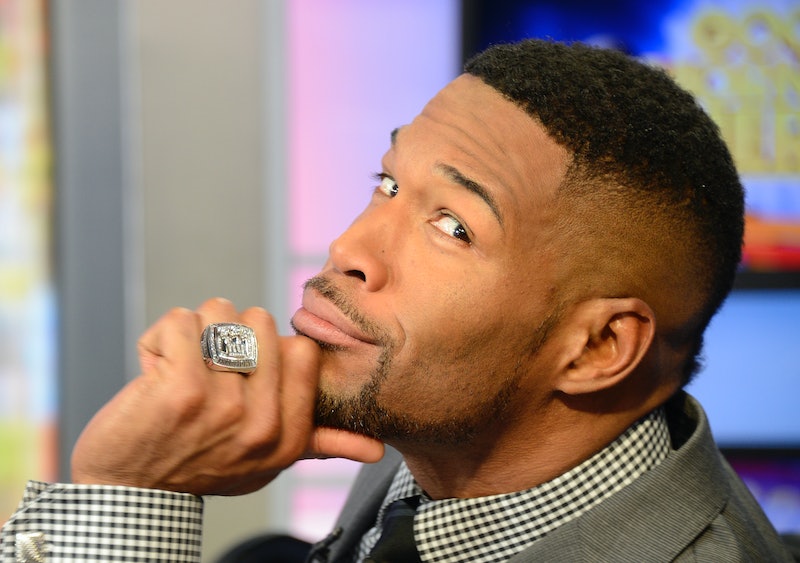 There's going to be a lot of money playing on the field at the Super Bowl on Sunday (have you seen how much a NFL player gets paid?). And that's not even counting the the Super Bowl rings which cost way more than all the blood, sweat, and tears players put into the game. Every year, the winning NFL team's coaches, players, and executives receive a Super Bowl ring, and though the memorabilia is free for the team, it costs a lot to make these trophies.

Many team's jewelers haven't revealed the price of the Super Bowl rings — the winning team's owner and the NFL split the cost. But, fans have an idea of how much money the winning team will be going home with. According to ESPN, the New England Patriots' 2015 Super Bowl champion rings were valued at $36,500 each. The Patriots' jewel-heavy design made their rings the most expensive Super Bowl memorabilia ever made, as of 2015, according to ESPN's report. Each ring had 205 diamonds and 4.85 carats of gold. They were the largest Super Bowl rings in history and the most costly. All together, Patriots' owner Robert Kraft reportedly purchased 150 rings for $5.475 million.

The NFL covers the cost of approximately 150 rings on average, which are distributed among the championship team's coaches, players, and others at the team's request, according to Fox Business. Each set of Super Bowl rings reportedly takes about four months to design, manufacture, and distribute, and is valued at around $5 million, though the winning team's design preferences can result in a higher or lower price point. For example, typically, Super Bowl rings are crafted from gold and diamonds, but back in 2010, the Greenbay Packers opted to set the ring in platinum instead of gold. So prices may very depending on the preference of whoever wins the Super Bowl.

Jostens, a Minnesota-based manufacturer of jewelry and memorabilia, are typically behind the production for Super Bowl Rings, according to Fox Business, though winning teams participate in the design-process. According to their official website, Jostens has crafted 35 of the 53 sets of Super Bowl Rings, and were behind the Patriots' jewels in 2019, which once again broke the record for the largest rings in history, packing 400 diamonds and 20 blue sapphires per ring, as reported by Fox Business.

For any football fan trying to purchase a Super Bowl ring for their own collection, the price might be much higher. Rick Harrison of Pawn Stars claimed in an interview with Money that Super Bowl rings from popular teams or players can sell for $40,000-50,000on the secondary market. He estimated that a ring from a iconic player like Tom Brady could be sold for as much as $250,000.

Hold on to those rings, fellas, you never know how much it could be worth someday.