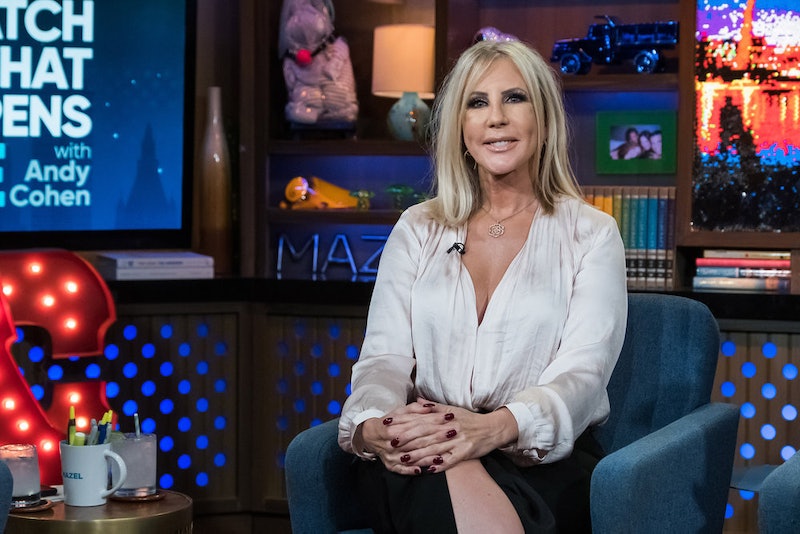 For thirteen seasons straight, Vicki Gunvalson held up an orange and said a witty tagline on Real Housewives of Orange County. After such a consistent run, it was shocking when Vicki got demoted to part-time status on RHOC. Fans can't help wondering what that really means and how many RHOC episodes Vicki will be on this season. It's just not the same show without her.

Even though Vicki will not be in the opening credits, she will still be in Season 14 episodes. On July 2, Vicki addressed the demotion in an Instagram post. She assured her followers, "I am back again this season right in the middle of the action in a different role."

Real Housewives executive producer Andy Cohen discussed Vicki's new status on the show during an interview with Us Weekly. He said, "She’s been on the show for 14 years. That is an unprecedented run on a scripted show, on a reality show, anything." True. No matter how much Vicki appears on Season 14 or even if it's her last season, she will always have legendary status among the RHOC fandom.

Andy also added that she was "very much a part of this season." He insisted, "And so it’s just, it’s just about keeping everything fresh." No shade, Andy, but Vicki has always "kept everything fresh" on her own. The woman is reality TV gold.

Even with the reduced role, Andy still hopes that Vicki will stay on the show "for another fourteen seasons." Hopefully with an orange in her hand from Season 15 onward. In an interview with TooFab, Orange County Housewife Shannon Beador dished on filming with Vicki. She told the website, "Vicki might not be holding an orange, but she is an integral part of the show, and she always will be."

Specifically, Shannon revealed, "Most of the time when I was filming in a group setting, I was with her, so she is present in the show, and she always will be." Beyond that, Shannon said that she and Tamra Judge threw an engagement party for Vicki and Steve Lodge that will be a major part of the season finale episode.

OC Housewife Emily Simpson admitted she was surprised by Vicki's demotion during an August appearance on the Domenick Nati Show. Still, she too promised that Vicki will be a major part of the season. Emily said, "I know a lot of people have said 'I'm not gonna watch if Vicki's not on it.' I know Vicki has a different title per se, but Vicki is on the show. And she's on a lot. I filmed with her a ton."

Emily emphasized, "It's not really like she's making some cameo here and there or some guest appearances. She's very much a part of the show and the cast." That's great and all, but she really should have got that orange that she deserves.

The new Housewife Braunwyn Windham-Burke weighed in on "replacing" Vicki as a full-time cast member. She clarified to People, "I've heard, mainly on social blogs and stuff, that I'm replacing Vicki and that's not true." Just like the other ladies, Braunwyn shared, "Vicki is still here. She films all the time. She's always around. So, whenever anyone says that to me, I'm like 'No one replaced Vicki. She's the OG of the OC and she's still here.'"

Even thought it's still tough to hear that Vicki is no longer a Real Housewife, it's good to know that she will be a major part of the drama on Season 14. Hopefully, she is such an integral component that she gets that orange back for Season 15.