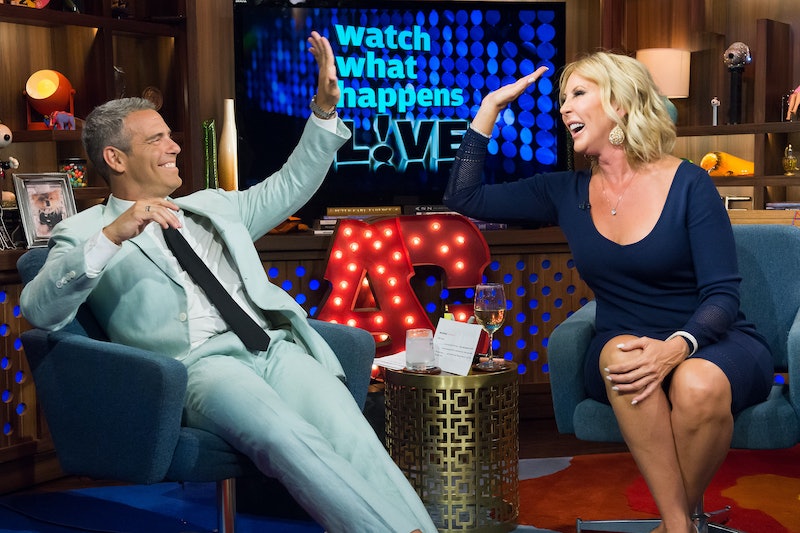 Real Housewives of Orange County fans were shook when the unthinkable happened: Vicki Gunvalson became a part-time Housewife on RHOC. Yes, this actually happened to the OG of the OG's. Does this mean she's on the way out? Actually, it's the opposite. Andy Cohen said Vicki will still be a big part of RHOC Season 14 despite her recent status change to Friend of the Housewives — and he hopes she is with the franchise for another 14 years.

Andy discussed the big shakeup during an Us Weekly interview that was published on July 24. Initially, the Real Housewives franchise executive producer spoke in more general terms. He began, "The truth is we’re always looking to freshen up every show." Fair, but Vicki has been the gift that keeps on giving in regard to storylines. She always has some new drama brewing.

Andy said, "She’s very much a part of this season. Ultimately, he emphasized, "And so it’s just, it’s just about keeping everything fresh." Then, he continued, "She’s been on the show for fourteen years. That is an unprecedented run on a scripted show, on a reality show, anything." Absolutely true. No matter what happens after RHOC Season 14, Vicki will remain a Real Housewives icon until the end of time.

Still, if Andy gets his way Vicki will stay on Real Housewives of Orange County forever. He told Us Weekly that he hopes she stays on the show for an additional fourteen seasons. Hopefully, in a leading role though, not that he mentioned that detail specifically.

Viewers will get to watch Vicki again on August 6 when Real Housewives of Orange County returns for Season 14. By that time, viewers would have had about two months to adjust to the major news. The Season 14 trailer was released on July 2 along with a new cast photo... that did not include Vicki.

She did take other photos to promote the season, but July 2 was truly the end of an era. The OG of the OC reacted to her demotion in a July 2 Instagram post.

She echoed Andy's sentiments when she promised viewers, "I am back again this season right in the middle of the action in a different role."

Andy also commented on that post with some very touching words. He told the reality TV veteran, "Vicki you ARE the OC. Here's to another 14 years... #OGofOC."

He's not wrong, which is why it's so confusing that Vicki got demoted at all. However, that doesn't mean she lost her orange forever, especially based on Real Housewives franchise history.

No matter what her technical role is on the show, there is one good thing that came out of this demotion: an outpouring of love for Vicki. Andy has publicly praised her along with RHOC cast members and the fans. Still, let's just hope this is a blip on the radar and Vicki has a major comeback when Season 15 rolls around.