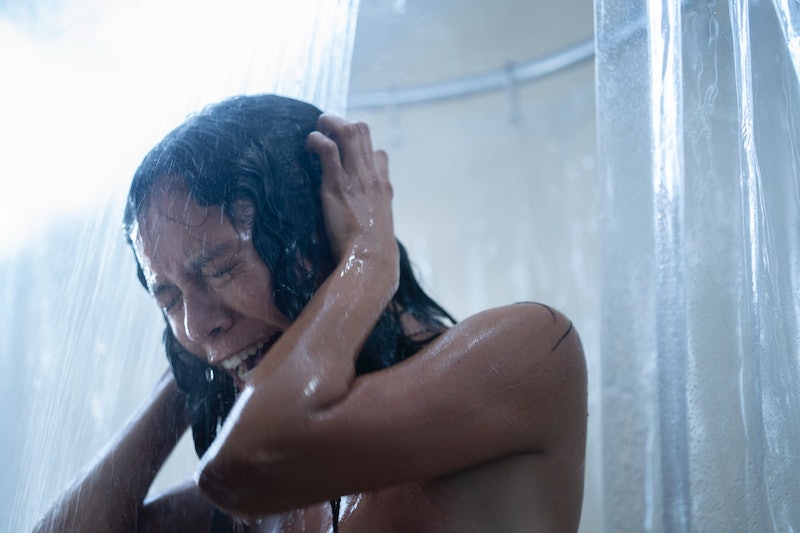 Netflix's new horror series Chambers, premiering April 26, follows high school student Sasha after she gets a heart transplant and begins having dark and haunting visions. It seems like it has all the makings of an enthralling, edge-of-your-set thriller, but just how scary is Chambers? There's no doubt that the story will terrify those who are faint of heart, but according to star Tony Goldwyn, it's designed to do more than make you jump.

In an interview with Build, Goldwyn said Chambers will play with your psyche and make you question what you're seeing. "You're not sure if there's something from another dimension happening or if it's just in Sasha's head," he explained. "Are [the parents of Sasha's donor] Nancy and Ben somehow creepy or nefarious? Is there some kind of bad force going on? So that I thought was very interesting and unique. I've done some horror movies as an actor that are either scary because they're violent or there is some supernatural thing right upfront and [Chambers] felt very different to me because we are dealing with death, grief, and the spirit world and what does that mean and is it real?"

In the Chambers trailer, Sasha has a heart attack and gets a transplant. She survives the surgery and starts to rebuild her life, but she can't shake the thought of another person dying in order for her to keep living. She goes with a man, who is presumably her father or guardian, to meet the family of Becky Lefevre, the teen whose heart beats in her chest. The grieving parents hug Sasha as if she is their own daughter, which causes Sasha to feel a bit uncomfortable.

As expected, the Lefevres are extremely creepy and weird, but they give her an offer that she cannot refuse – a full scholarship to a fancy school. However, she's told by an unknown person to "watch out for that family." Sasha begins to have visions of things that Becky once saw and starts to see the girl's face pop up while she is lying in bed. The trailer then goes down an eerie path with clips of Becky standing in a gym with black liquid oozing from her mouth as her chest starts to rip open while Sasha sits up with blood dripping from her surgical scar.

Becky's father appears to be doing some sort of ritual on the floor while panting heavily. And there are several clips with rats scurrying everywhere as Sasha continues to see scary figures. It's a pretty clear indicator that this show will have its share of suspenseful and downright terrifying moments as Sasha tries to find out the truth about Becky's suspicious (and likely horrific) death.

So yeah, Chambers will likely have a few good jump scares, but it also seems to weave a compelling mystery. Whether you're looking for a new horror show to keep you up at night or a new, twist-filled case to crack, Chambers seems to have a little something for every thrill-seeker.