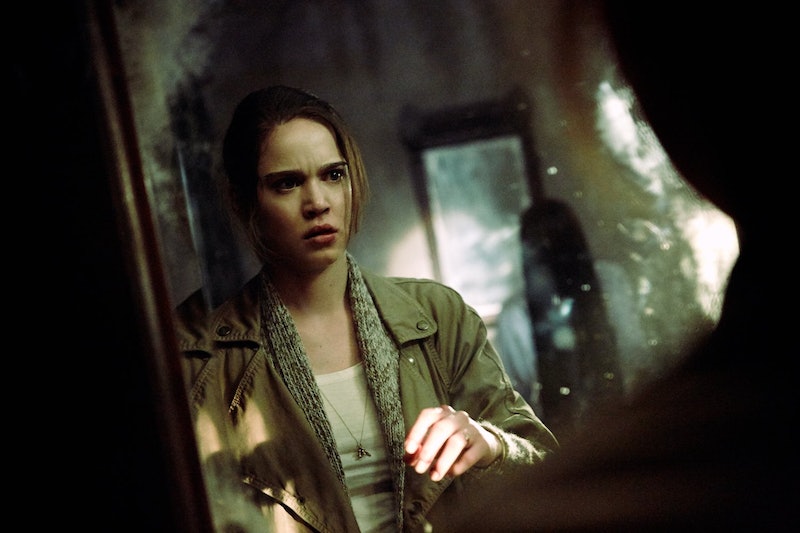 When I think of the scariest movies I've ever seen, my mind immediately goes to three classic horror movies: The Exorcist, The Shining, and... The Ring. The 2002 film may not be as highly regarded by critics as my other two picks, but make no mistake: The Ring is a terrifying film. Which makes me a little afraid to venture near a movie theater come February 3, because that's when Rings, the next installment in The Ring franchise, is set to premiere. But how scary is Rings, really?

To be honest, it's probably not as scary as The Ring. Now, that's not a knock against Rings, and I'm not saying that Rings doesn't look scary. I'm sure the movie is full of frights, but because it's a sequel, it's nearly impossible for it to replicate the terror of the original. Horror movies, like comedies, rely on surprise to achieve their desired goal. Once you've seen a girl coming out of a TV once, it's not as scary the second time. Just like how a joke is never as funny the second time you hear it. Think about it, can you name one horror or comedy sequel that was scarier or funnier than its predecessor? Not so easy, is it?

You also may have forgotten that The Ring already has a sequel, which came out in 2005. Although the movie had a solid box office performance, it was not well-received by either critics or fans, mainly because it was seen as a rehash of the scares already seen in The Ring three years earlier and didn't really have much new to offer. I do think, however, that Rings will be scarier than The Ring Two, as the new film has a few advantages over that other sequel.

For one, Rings has the advantage of time. It's been 15 years since The Ring came out, and many of the people who will go see Rings in theaters (i.e. teenagers) may not have even seen the original film. And for those who have seen The Ring, it's probably been a while since they've done so. This gives Rings the element of surprise that The Ring Two didn't have, which should leave plenty of moviegoers scared out of their wits.

Rings is also taking the franchise in some new directions, something that The Ring Two failed to do on a large enough scale. Although it's partly relying on the formula from The Ring, where someone watches a video and then dies seven days later, Rings also incorporates other horror elements like a "movie within the movie" and some grandiose scenes, like a plane crash. These fresh new touches should serve to scare viewers who are already familiar with The Ring and are no longer frightened by its basic formula.

So how scary is Rings? While it's unlikely to match the horror of The Ring, the movie still looks to be one of the most terrifying films of the year.