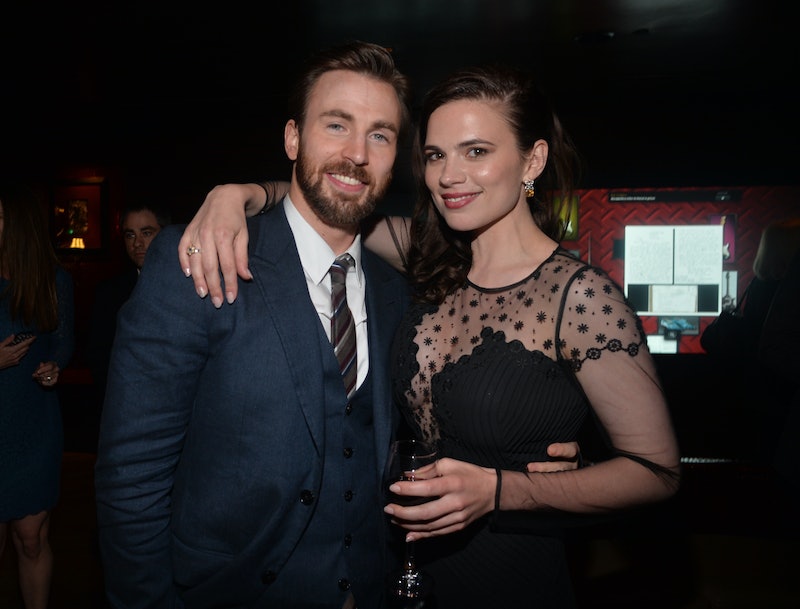 After all of the heroes came back from "The Blip" and Thanos was finally defeated, Avengers: Endgame ended with a touching goodbye to two of the franchise's most beloved characters. In a recent interview with The Hollywood Reporter, Hayley Atwell discussed Steve Rogers and Peggy Carter's Endgame ending, explaining that the pair's final scene, slow dancing in the living room, was a "fitting ending" to their epic love story.

According to the outlet, Atwell was only told that Peggy would appear in the final Avengers installment a few weeks before she arrived on set, saying, "I think we shot that maybe two years ago. It was maybe a few weeks before then that I got the call." The actor explained that Marvel executives told her about the romantic moment with Steve (Chris Evans), proposing, "'We’re thinking about this… What do you think about it? It might end the whole franchise.'"

Explaining that it only took an afternoon to film the dance scene, Atwell gushed that it was a "fitting" way to conclude the character's love story. "I thought it was very endearing, innocent and wholesome in the way that it keeps those characters in their time," she explained. "I thought it was quite beautiful and very tasteful of Marvel to finish this 10-year story in a very simple storyline about two human beings — and one of them doesn’t even have any superpowers."

Especially compared to the universal stakes of the Avengers' fight against Thanos, Atwell thought ending the film with Steve and Peggy's quiet moment together, was particularly moving. "I thought the tone of it, to end there, after some extraordinary things of trauma, action, effects and powers… to just have two people slow-dancing was very beautiful," she explained.

While Atwell is set to reprise her role as the founder of S.H.I.E.L.D. in Marvel's upcoming What If ... animated series, the actor admitted it's unlikely she'll ever play Peggy again in person. "I feel really fulfilled," Atwell said. "It was a great time, and I think they ended it beautifully with Endgame. It feels like a fitting end to that narrative." However, she did say that she feels, "lucky to have played her," and have gotten to see the impact that Peggy and the rest of the Marvel Cinematic Universe has had on fans.

One possible project that could tempt Atwell back into Peggy's uniform, however, is an Agent Carter movie, which the actor first proposed back in September 2016. "I hound [Marvel Studios co-president Louis] D’Esposito on a regular basis, saying, 'Give me a movie!'" she told CBR.com at the time. And based on the time-hopping plot of Endgame, it wouldn't be completely out of the realm of possibility for Marvel to check in with Peggy (and now, Steve) in a different decade.

"The great thing about Peggy is, we know from Winter Soldier that she lives a long life, so she can come back," Atwell told CBR. "I'm banking on, when I'm in my fifties, I'm like, 'This is the time. Let's see what Peggy's up to in this decade.'"

The Marvel Cinematic Universe has given fans a glimpse at Peggy and her career with S.H.I.E.L.D. in various decades throughout the years, so it wouldn't be too much of a stretch for both Carter and Evans to reprise their characters in the future. If not, at least fans — and the actors themselves — got to finally see Steve and Peggy have that dance.