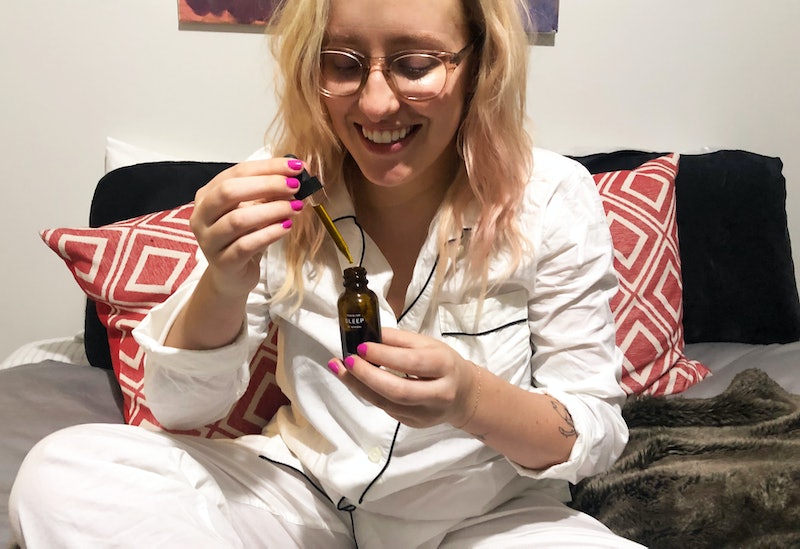 There are two categories of things I find myself extremely eager to try these days: Products that claim to improve my quality of sleep, and products made with cannabinoids. Once the farm bill legalized the industrial production of hemp in the U.S. in late 2018, my desk was suddenly covered in all sorts of the latter. While I'm still happily sorting through piles of CBD gummies and skin care products, CBN oils for sleep are far less ubiquitous — and therefore, I find, more intriguing.

Just like CBD (cannabidiol), CBN (cannabinol) is a non-psychoactive, cannabis-derived compound that researchers believe interacts well with the body's endocannabinoid system. Dr. Jaclyn Tolentino, DO, a Parsley Health Los Angeles physician who lists "clinical cannabinoid medicine" as an interest in her practice, previously told Bustle that CBN is believed to specifically bind with our CB2 receptors, which are expressed throughout the body (as opposed to CB1 receptors, which are just in your brain). That binding, Tolentino explained, is reported to produce a pain-relieving effect, which "may account for its reported benefit as a sleep aid." According to Steep Hill, a cannabis research and technology company, "2.5mg to 5mg of CBN has the same level of sedation as a mild pharmaceutical sedative, with a relaxed body sensation similar to 5mg to 10mg of diazepam." You probably know diazepam by its most common brand name, Valium.

Michael Breus, PhD, a California-based sleep specialist and American Academy of Sleep Medicine (AASM) fellow, tells me he does recommend CBN to his patients who are having trouble sleeping, though he notes that it can be expensive and hard to find. Although so far no major negative side effects to taking CBN have been made public (mostly because there have been so few studies on it ), Breus also recommends people speak to an MD specialist before starting any CBN treatments to ensure it's right for their specific type of sleep disorder. (For example, the AASM's official position is that cannabis should not be used to treat sleep apnea.) "There is, at this point, a lack of scientific research into the sleep-inducing properties of CBN," Breus continues. "I’m hopeful we’ll eventually see some additional scientific studies that explore the sleep-promoting capabilities of CBN."

In terms of my own sleep habits, I tend to fall asleep fairly quickly (unless I'm feeling anxious about something, in which case it's anyone's guess how long it'll be before I'm off to snoozeland) but I usually wake up several times every night. I was mainly hoping the CBN would kick in to help me sleep all the way until my alarm went off in the morning.

For this particular test of CBN, I went with the first bottle I got my hands on: Mineral Health's Robyn for Sleep. The Mineral Health website says Robyn is a "1:1 blend of calming cannabinoids and sleep focused terpenes to relax the body and ease the mind. [It's] formulated with high amounts of CBN, CBD and therapeutic terpenes to induce rejuvenating rest." Mineral founder Matthew "Mills" Miller tells me that "independently, [CBN and CBD] are useless" but that "collectively and in high doses they will activate to promote wellbeing in the body and mind." Miller explains that terpenes are essential oils naturally found in cannabis and, in addition to giving cannabis its distinct smell, can increase the effectiveness of cannabinoids.

Miller recommends taking the drops 30 minutes before bedtime every night that I anticipate being able to get eight hours of sleep. For first-timers (me), he recommends taking half a dropper, which is 12 mg of the oil.

Miller says there are no potential risks or negative side effects to taking ROBYN (because it is "a plant medicine"). When I ask Miller if there were any types of people who were less likely to get a good result from his products, he says, "People with closed minds. The mind is the most powerful medicine."

So, I opened my mind, and squirted my first half dropper under my tongue.

Unfortunately, I don't often find myself in a situation where I'll get to sleep for eight hours straight, so I ended up taking the drops every night where I knew I'd get at least six hours instead, which is closer to what Steep Hill research shows as the average amount of time CBN works for. The only other days I skipped over the month-long trial were ones where I was feeling sick and therefore taking OTC medicines like NyQuil that I knew would knock me out anyway.

Unless I'm taking the aforementioned NyQuil, I consider myself a pretty light sleeper. I can take anywhere from 10 to 30 minutes to fall asleep on an average night, and I usually wake up at least once before my alarm goes off. I blame this partially on sharing a bed with a partner and three cats — all of whom usually come to bed later than me. I knew the CBN wouldn't stop my smallest cat from digging her claws into my head at 3 a.m., but I hoped it would at least help me sleep through any minor moving around my bedmates did. I also hoped it would help my brain focus on sleeping instead of running through my work to-do list or making up various hypothetical stressful scenarios to keep me awake.

I started the test on a night before I had to wake up early for a flight, so I took a full dropper (about 30mg). The taste of ROBYN is not not marijuana-y, but it's definitely less like chewing on a joint than some of the other cannabis-based oils I've tried. Just like every other tincture I've tried, you're supposed to squirt this one under your tongue and hold it there for at least 30 seconds before swallowing. The belief is that this is the second-quickest way (after smoking) to deliver the CBN to your brain.

I slept soundly through that first night, despite going to bed (and waking up) much earlier than I usually do. I honestly found the sensation similar to taking cold medicine that makes you drowsy, though I experienced less grogginess when I woke up the next morning.

Since the full dropper worked so well, I wanted to see if I could reduce my dosage and have the same effect. After all, at $160 a pop, this stuff isn't cheap, so I wanted to make the bottle last for as long as possible. I took half a dropper on the second night, and definitely noticed a difference: I woke up multiple times, though I could partially blame being on vacation and sleeping in a strange bed for this.

For the rest of week one, I split the difference and took about 3/4 of a dropper, which seemed to be my Goldilocks dosage. I slept even better than usual for the rest of my vacation.

It wasn't until week two that I tested how the oil fit into my normal routine: in bed around 11 p.m., up for work around 6 in the morning. I took the oil at 10:30 p.m., then puttered around cleaning for about 15 minutes, at which point my eyelids got really heavy. I fell asleep pretty quickly after that, and barely moved when my partner and cats came to bed around midnight. I woke up a half hour before my alarm went off, and felt totally refreshed.

Week two was also the week I got sick, so I took an unplanned couple of days off the oil to take medicine instead. When I got back into the CBN swing of things, I wrote "my sleeps are really good" in my notes. I was barely ever waking up in the middle of the night, and that morning grogginess I felt at the beginning of the experiment was totally gone.

The third week of testing started off strong: I happened to get a new piercing and new tattoo on the first two days, and I still slept super soundly despite the lingering pain from both. My partner told me the next morning that he'd gotten out of bed to take some laundry out of the dryer, and I hadn't even stirred.

Later in the week I went on another trip with some friends, and let one who has trouble sleeping most nights try some of the oil. She spent a huge portion of the next day raving about how it was the best sleep she's gotten in a long time. I also slept very well, even though the other friend I was sharing a bed with swore she was accidentally kicking me in the back all night long.

During the final week of testing, I was starting to feel like the CBN wasn't working quite as well for me, despite upping my dosage to a full dropper most nights. So, I switched back to melatonin (which I'd been taking fairly regularly before starting this 30 Day Trial, but I felt had also started to affect me less) and slept like a rock. A couple days later, I took the CBN again and... slept like a rock yet again.

I've come to this fairly unscientific conclusion: Taking sleep aids like melatonin and CBN definitely help me sleep more deeply through the night — as long as I use them occasionally rather than every day. Since I've never been diagnosed with any sort of chronic sleep disorder, this type of assistance is really all I need.

Another bonus I noticed throughout the test was that I never had particularly terrifying dreams when taking the CBN — which has been reported as a side effect of other sleep aids. Vivid dreams, yes, but I've been able to remember my dreams in extreme detail (much to the dismay of friends and family members who've put up with my retellings) since I was quite young.

With the known risks so low and the overall benefits I saw during this month-long trial, I'll definitely be keeping a bottle of CBN on my nightstand moving forward, snuggled between my melatonin and sleepy lotion.

Readers should note that the regulations and data surrounding CBD/CBN are still developing. As such, the information contained in this post should not be construed as medical or legal advice. Always consult with your doctor before trying any substance or supplement.