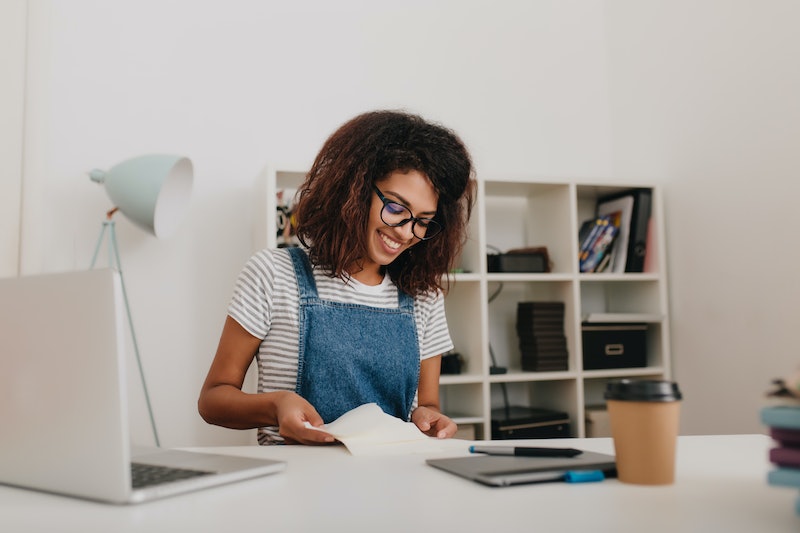 If you've been looking for push in the right direction now that it's a new year, the Capricorn Stellium is here to do just that. A Stellium describes an event in which a cluster of planets are hanging out in the same sign, creating a scenario in which their presence magnetizes that sign's energy. Though I might be a biased bossy Capricorn, I personally think a Capricorn Stellium is the best Stellium, on account of the fact that its astrological influence leads us toward our own goals.

Lucky for us, a Capricorn Stellium is occulting this month in Mercury, Jupiter, Saturn, Pluto, and the South Node. It will be inspiring us to embrace our ambitious nature and fight for boss status with unwavering force. If there's one thing we can expect to experience, it's a shift in professional energy. Spoiler alert: it's about to go into overdrive.

The Stellium will be in Capricorn for a while; Saturn will be there until Mar. 21, the South Node will be there until May 5, Jupiter until Dec. 19, Mercury until Jan. 16, and the sun until Jan. 20. As astrologer Lisa Stardust tells Bustle, this means that this is essentially the year of the goat. Capricorn energy is coming in strong this January, and it's sticking around in different capacities throughout the year. So not only will you have some help getting started on your goals, but you'll also have some astrological assistance in sticking with them, which is where a lot of us need help the most.

Here's how Stardust predicts each sign will utilize that bossy Cap energy this January.

You've been working hard, and this month it's really going to show. According to Stardust, a promotion may be coming your way. But before you celebrate, she warns that you'll need to be a team player as moving up in your position will rely on your ability to thrive with your coworkers, not just rise alongside them.

If you're feeling pretty good about yourself right now, that's partially due to Cap energy and partially due to a project that you're involved with that's destined to work out. "Keep the faith and you’ll be fruitful on your endeavor," Stardust says, reminding Taurus that there might be some ups and downs in the beginning of the venture, but to trust that it's going to work out and is good for your career.

If you've been doing a killer job at work, taking on more responsibilities and proving to be reliable and efficient, it's time to get compensated for it. "Asking for a raise is hard, but you may be successful. Use your suave communication skills to get the monetary bump you deserve," Stardust suggests, letting Gems know that the cosmos are in favor of a raise right now so they should feel confident in bringing up the subject.

If you feel like there's been tension with coworkers lately, it's not in your head. According to Stardust, we have the Capricorn Stellium to blame for "a professional partnership becoming toxic." But Stardust says to ride out Cap season, and to not cut ties right away, as giving the relationships a little bit of air might actually save them. Just keep your head down, do your work, and avoid office drama like the plague.

Stardust says your coworkers may be stressing you out during this time. And though you might be tempted to draw harsh boundaries, or simply ignore them, going to HR and handling issues the mature way will make your life easier — and actually solve the problem.

If you find that you're feeling nostalgic right now, you have the cosmos to thank for it. "You’re commuting to an old dream. This may lead you back to the career you always wanted, but never began," Stardust predicts. But before you quit your current job to rush back to an old dream, spend some time thinking about it thoroughly to make sure it's not just a passing idea. If you still feel drawn to this path after Cap season is over, you might want to explore it further.

You have a lot on your plate right now and you're doing your best to keep things balanced, but currently your home life is getting the best of you. "Try to maintain balance to keep both areas of your life afloat," Stardust warns, as your work life could suffer as a result of the imbalance. You might need to wake up earlier to get on top of your work-related responsibilities if you can't give up more time from your home life.

You know what you want and you know how to ask for it. "Asserting yourself at the office isn’t hard for you. Now, you’ll be more able than ever to express your feelings about office injustices that you want to change," Stardust predicts. Just make sure that you're considering how your words affect others, so that you're not putting down your coworkers while lifting yourself up. Also be aware of power dynamics and make sure you're not over-expressing yourself or your opinions to your higher-ups, unprompted.

This period will have you reevaluating your job and your professional worth. "You’re burning the midnight oil, but not making as much cash as you’d hoped. Figure out what projects are the most lucrative and invest your energy only in those," Stardust says, encouraging Sags to broaden their horizons if their needs are not being met.

Cap energy is propelling you to be your best in every way. But it's not always about you and sometimes stepping back to see how you fit in within your company is the most powerful thing you can do. According to Stardust, it's time to "stop thinking you have to run the world." As, once you learn to work cooperatively with others your professional life will change and the quality of your goals will improve.

There's something creative that you've been wanting to work on, but haven't found the confidence or motivation to consider, until now. Stardust encourages "using your creative skills to make your artistic dreams a professional reality," as this is a possibility now more than ever. It's scary to invest in creative work, but you should trust that you have the gift to actually turn it into your career.

You're going to be stressed about money during this time, Stardust says, but before you start yelling at payroll to see if there's an issue with your checks, take some time to go through your bank statements and evaluate your spending. You might need to tighten your financial belt a bit if your personal expenses are eating up too much of your income. But if your statements show that you've been really responsible and modest, you might be in a place to talk to your boss about a cost of living raise.

Whether Cap energy inspires you to clock more hours at the office, champion projects that mean something personal to you, or change paths entirely, remember that the results of your efforts aren't going to register immediately. Be patient for your reward and trust that the work you put in now will benefit you throughout the year — especially with Cap's continued influence over the remainder of 2020.