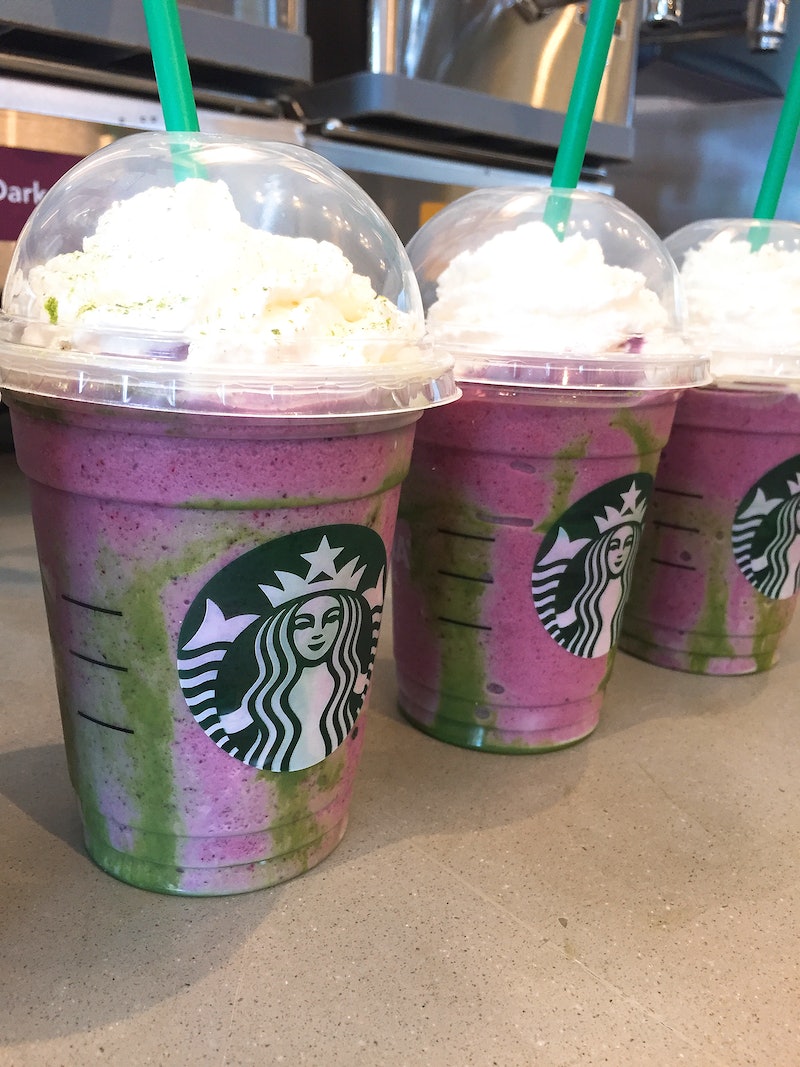 Courtesy of Jocelyn Freeman
By Lucia Peters
May 2, 2017

Jocelyn Freeman, the barista who created the “Mermaid Frappuccino” that started going viral this week, loves coffee. She’s been a Starbucks partner for over a decade, so she’s definitely got some stories to tell — but no matter how much experience you’ve got, sometimes, things will still take you by surprise. That’s what happened with the recent Unicorn Frappuccino: “I have worked for Starbucks for a long time, and have seen a lot,” Freeman tells Bustle in an interview, “but I have never seen a Frappuccino take off like this.” Nor, for that matter, did she expect her own invention to take off in quite the way it has — after making appearances everywhere from Cosmopolitan to PopSugar, she wrote in a post on her Instagram account, @themodernbarista, “Never in a million years would I have thought a drink I created would have gone viral.” But go viral, it did; the internet loves creativity, and a fruity, refreshing drink named for a mythological creature currently having A Moment is as creative as it gets.

In addition to slinging lattes and dreaming up fancy new Frappuccino flavors, Freeman runs the website The Modern Barista, on which she shares her favorite coffee and food pairings, recipes, and more. Back in the early 2000s, however, Freeman hadn’t yet begun working at Starbucks, although she was a regular customer at the store by her house. “At the time, I ran my family business (three retail stores and a wholesale company), and would stop in daily to get a drink,” she tells Bustle. In the spring of 2005, the family business sold the retail stores, which freed up a lot of Freeman’s time. But although her local Starbucks’ store manager asked her time and time again if she would consider working there, she kept turning him down. “Then one day,” she says, “he asked me to go to the store holiday meeting so I could understand a little more about Starbucks.” That meeting ended up being the turning point: “I fell in love and started working the next day,” she tells Bustle. It was Halloween in 2005 — so by the time fall rolls around this year, she’ll have marked 12 years with the company.

Perhaps unsurprisingly, The Modern Barista grew out of Freeman’s coffee experiences as well. Her husband — who, incidentally, she also met at Starbucks — is active duty military, so they’ve moved around a lot. “When we moved from California to Seattle,” she tells Bustle, “I moved away from my family and friends and was sad. I turned to social media, and I started posting pictures on Instagram.” Freeman describes herself as “a huge foodie,” so a lot of those pictures ended up being of food and coffee pairings. It snowballed from there: “People would always ask for recipes, so I decided to carve out my own little corner on the internet,” she says. “I love coffee, and I love being able to photograph and write about it.” Thus, The Modern Barista was born.

When Starbucks released the Unicorn Frappuccino in April, even veteran baristas like Freeman were shocked at the demand for the drink. Like many Starbucks locations, Freeman’s sold out of the Unicorn Frappuccino much earlier than anticipated — in this case, after just 12 hours the first day it was available. That’s when Freeman began experimenting with new drink combinations. “I knew my store had to come up with another drink so people wouldn't leave mad,” she says.

The first drink she made was a blended strawberry lemonade with vanilla bean powder she called the Narwhal; however, as she notes, “That is not as pretty of a drink” (although I’m sure it’s delicious all the same). So, she set to work making what would become the Mermaid Frappuccino — this time ‘round with the drink’s appearance being as key to its creation as its flavor profile. “I knew I wanted to use the dried blackberries in a drink, because it makes the most vibrant shade of purple,” Freeman says; that brightly colored base, combined with the “classic combination” of matcha and coconut, seemed like it might be a winner. “It was all very quick and on the fly,” she says of the creation process — but after her first customer taste tested it, she knew she had chosen wisely.

“I had a customer at the [drive through] speaker order the Unicorn [Frappuccino], and I told him I was sorry, but we were sold out,” Freeman says. “He sounded so sad that I said, ‘Listen, I am trying to make a Mermaid Frappuccino, can I give it to you on the house?’ He asked what was in it, and I said I wasn’t sure, but I promised it would be amazing. I gave it to him and he said, ‘It looks like you!’” Freeman has pink and purple hair — vibrant and colorful, just like the Frappuccino she had made. “After that,” she says, “I knew this drink would be a hit with my customers.”

I was curious how often customers come in and order drinks with a high level of customization; I’m usually too lazy to order anything more involved than what’s already on the menu myself, but Freeman tells me customization requests are actually not at all unusual. They happen “All the time. Every day,” she says — and, in fact, she’s been at it so long that she says it’s “second nature” to her now. “That’s one of the things I love about Starbucks — you can create so many different things!” she tells Bustle. And lest you worry that it’s annoying to order something relatively elaborate, allow Freeman to put your mind at ease. “I look at it like this: Starbucks is an affordable luxury,” she says. “For some of my customers, this is their one special treat for the day [or] week. So why not make it exactly how they want it?”

Looking for a recommendation? Freeman’s favorite coffee and food pairings vary depending on the day, the weather, and her mood, but she notes, “Right now, I am all about cold brewed kati kati” — a blend of Kenyan and Ethiopian beans with “citrus and spice notes” and “subtle floral aromas and crisp acidity,” according to Starbucks — “paired with fresh oranges.” She also recommends the new Midnight Mint Mocha Frappuccino, which, she says, does actually taste “exactly like a Thin Mint.”

Oh, and if you’re wondering whether Freeman is Team Unicorn, Team Dragon, or Team Mermaid… well, there’s really only one answer, isn’t there? “Team Unicorn, of course!”