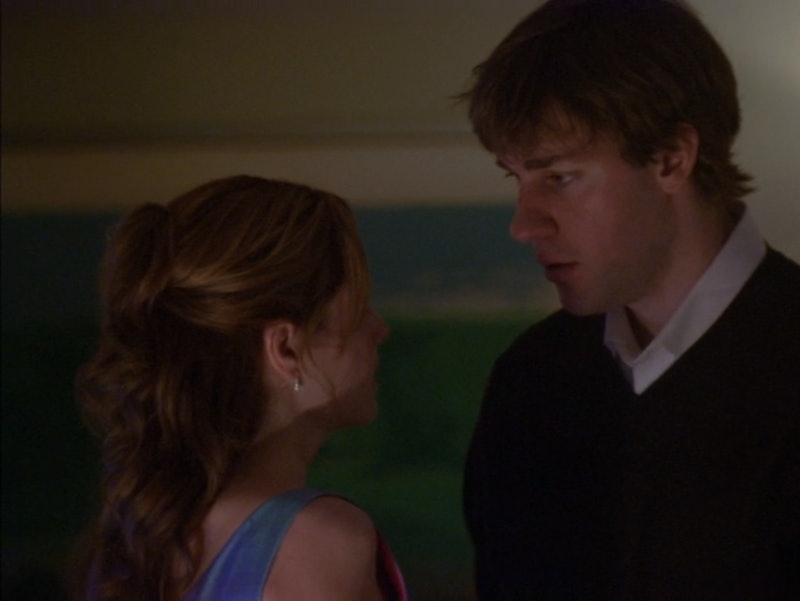 After spending nine years at Dunder Mifflin, it's only natural that the man who played Jim Halpert picked up a trick or two. In a new video interview with Mashable, John Krasinski shared how The Office's Jim and Pam inspired A Quiet Place, or at least the emotion of A Quiet Place. The almost entirely silent film is written and directed by The Office favorite, and he stars in it alongside his real-life wife, Emily Blunt, as well. So far, the movie is making a splash at the box office, and it's fun to know that one of TV's most romantic couples may be a small part of its recipe for success.

In the interview, Krasinski explained how a piece of advice from The Office executive producer Greg Daniels helped him shape the narrative of his new movie. The actor said,

"It was actually something I learned on 'The Office' — Greg Daniels, who created 'The Office' — I remember he said to me one day, he said, 'Your job is not to deliver these lines funny. Your job is just to deliver the lines and whether people find it funny is up to them and if people find it sad when you say nice things or cry when you say nice things to Pam, that's up to them, too."

Basically, you can't tell the audience to sob when Jim and Pam share their first kiss at the end of Season 2 — it's something they have to feel. Krasinski took this lesson and applied it to the family dynamics of The Quiet Place.

The way he sees it, his film isn't a horror movie. It's the story of a family, and if it happens to scare you, then that's just a happy bonus. Krasinski continued,

"It sounds like such a simple thing, but I've really taken that for the rest of my career, so I thought I'll just apply it to this. I'm not making a scary movie. I'm just making a movie about a family, and if their circumstances scare you, then I've done my job right."

A Quiet Place is a film about a family trying to survive after monsters with a hyper-sense of hearing have killed most of the people on Earth. Their journey appears to be resonating with audiences. The film is certified fresh by Rotten Tomatoes, and it's made $77.5 million domestically at the box office so far, which is even more impressive considering it only cost $17 million to make.

However, it's been hard for audiences to separate Krasinski from Jim, and it's no wonder when the movie appears to feature an Office Easter egg for Jim and Pam fans. In addition to Krasinski applying the advice Daniels gave him to the film, he also slipped in a scene that calls back to a special moment from The Office Season 2.

In a separate video, Mashable points out that there's a scene in the film where Krasinski and Blunt's characters share earbuds. This scene is eerily reminiscent of the super sweet moment in The Office Season 2 episode "The Client" when Jim and Pam stand outside Dunder Mifflin sharing headphones. It's one of the couple's earliest intimate moments that definitely had fans' hearts beating faster, so to see Krasinski honor that moment — even if it was an accident — is a treat in an otherwise incredibly scary film.

There's no doubt that Krasinski's career has taken off in a major way. In addition to A Quiet Place, he also has the starring role in Amazon Prime's summer series Jack Ryan. However, it seems that no matter what he does next, he'll always take a little bit of The Office — and Jim and Pam — with him.