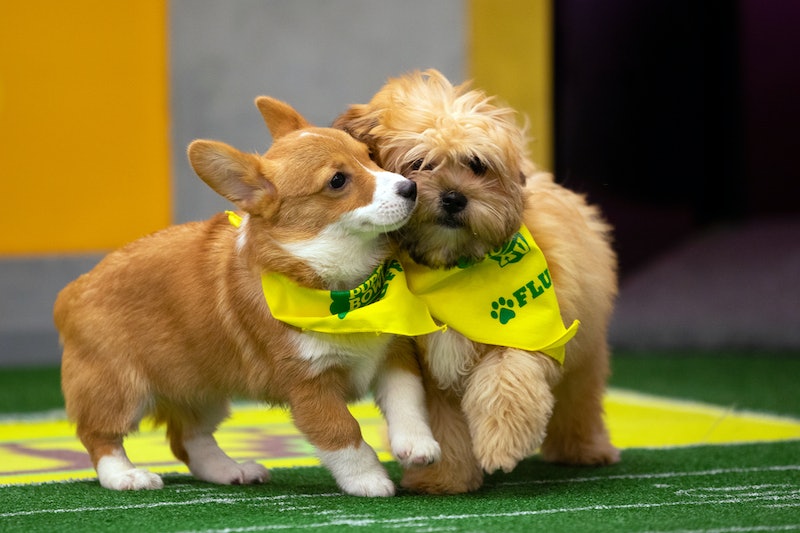 Whether you love the Super Bowl or hate it, pretty much everyone can agree that the Puppy Bowl is a glorious occasion. Just as in past years, you can adopt the puppies in the 2019 Puppy Bowl, though according to USA Today, most of the furry friends you'll see on-screen found homes last fall, when the Puppy Bowl XV was filmed. Still, there are many more puppies available for adoption from the featured shelters. So while your potential new dog might not be a Puppy Bowl MVP, they still could very well be the MVP of your heart.

For its 15th year, Puppy Bowl worked with 51 animal shelters and rescue organizations from more than 20 states, the U.S. territory of Puerto Rico, and Costa Rica, per USA. There will be a grand total of 93 puppies featured and there are 36 puppies in the starting lineup from 27 different shelters. Some of the standouts are Gallagher, the Saint Bernard from AHeinz57 Pet Rescue & Transport in Iowa; Melody, the Maltese and Yorkshire terrier mix from Memphis Humane Society in Tennessee; and Will, the three-legged Old English sheepdog from Doodle Rock Rescue in Texas. (Will is one of three dogs with special needs who will be competing.) But there are so many dogs that everyone watching the Puppy Bowl can have their favorite — and it may lead you to look into how you can get a dog like these adorable competitors from Team Fluff and Team Ruff.

This year, some celebrities even got involved in helping to get adoptable puppies featured. Olympian Gus Kenworthy has a special segment with Muddy Paws Rescue in New York where Sierra the American Staffordshire terrier and chow chow mix came from. Kenworthy has been an advocate for rescue dogs and helped expose the horrors of dogs farms in South Korea while he was competing in PyeongChang for the 2018 Olympics. Reality star Lisa Vanderpump of The Real Housewives of Beverly Hills and Vanderpump Rules is also involved in the Puppy Bowl: Violet, a Chihuahua and miniature poodle mix, came from her dog rescue organization, Vanderpump Dogs, in California.

Puppy Bowl is also spreading awareness about dogs in Puerto Rico and Costa Rica. Marisol, a miniature poodle and Catahoula mix, traveled all the way from Territorio de Zaguates, a Costa Rican non-profit that was featured in Netflix's docuseries Dogs. And Puppy Bowl referee Dan Schachner joined The Sato Project to rescue and rehabilitate puppies from Puerto Rico and bring them to the U.S. (Starter pups Bee, Bella, Bugsy, and Harry are all from The Sato Project.) By featuring dogs from places like Puerto Rico, Miami, and Houston, the Puppy Bowl is bringing attention to places that were impacted by natural disasters, as noted by CNN.

Beyond the Puppy Bowl, Animal Planet is also having their second annual Dog Bowl this year. According to Today, the Feb. 2 Dog Bowl will feature 63 dogs from 31 shelters across 15 states. There's adoptable kittens in the Kitty Halftime Show, too, and if you like cats, don't forget to check out Hallmark Channel's equally adorable adoptable programs: the Kitten Bowl and the first-ever Cat Bowl.

You might be bummed that you can't adopt the exact pup you fall in love with while watching the Puppy Bowl, but the entire point of the event — besides to be a cute alternative program to the Super Bowl — is to raise awareness about pet adoption. So if you want more information about how to adopt an animal in need, visit Puppy Bowl's Pet Adoption Resources page. And while you might not get a Puppy Bowl competitor, you can save another dog from one of the many rescue organizations that provided the Puppy Bowl pups.