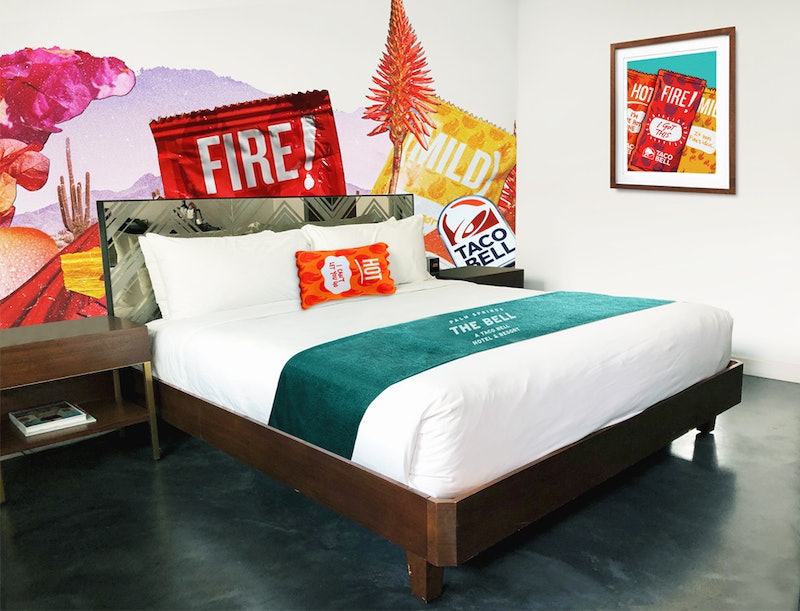 I don't even know where to begin. There's too much to love — and to question — about this new information. If you've ever thought you were such a big Taco Bell fan that you'd really just like to live in a Taco Bell, I've got some good news for you. No, you can't yet move straight into a Crunchwrap Supreme, but you can stay in Taco Bell heaven — at least for a little while. If you're wondering how to book a room in the Taco Bell hotel, then I have excellent news — The Bell: A Taco Bell Hotel and Resort is about to be open for business. I can't believe that this idea has become a reality, but it's 2019 and, truly, dreams do come true.

The Taco Bell hotel will be based in Palm Springs, California, where the company has taken an existing hotel and, for the lack of a better phrase, taco-ed the hell out of the place. There are over 70 rooms available with prices starting at $169 per night, for guests 18 and over.

The hotel will only be open from August 8 to August 12, so if you want to get a reservation you'll have to be on the ball. Reservations open on Thursday, June 27 at 10 a.m. PT and 1 p.m. ET on the hotel’s website.

What can you expect from The Bell? Well, obviously a lot of food — including exclusive Taco Bell menu items that will be making their debut at the hotel. But there will also be lots of pool-side fun — with entertainment, activities, and more. Expect to see Feed the Beat artists, dive-in movies, and even a “Freeze Lounge,” inspired by Mountain Dew Baja Blast — where, yes, everything will be very cold. And, of course, you can expect lots and lots of your favorite Taco Bell style, everywhere you look.

"The hotel draws on Taco Bell’s vibrant palette to create a unique and flavor-filled destination that is the ultimate expression of the brand, unlike anything the brand has done before,” Taco Bell’s Senior Director of Retail Engagement and Experience, Jennifer Arnoldt, said in a press release. “We’re excited to give a peek into Taco Bell’s first hotel that is truly Taco Bell luxury at a value as we evolve how fans can celebrate with the brand this summer and beyond.”

Of course, this isn't the first time the brand has gone a little beyond — Taco Bell seems determined to invade every area of your life and people are, frankly, welcoming it with open arms. You can already wrap yourself up in a burrito blanket, courtesy of Taco Bell. You can go to a Taco Bell hiring party and work at Taco Bell forever. You can even throw a party in Taco Bell, complete with Taco Bell accessories. But, most importantly, you can get married in a Taco Bell — because that's where all of our paths are eventually leading, am I right? We worship at the altar of Taco Bell and we let them have their way with us. That's life.

A Taco Bell hotel — literally called The Bell — may seem like something you dreamed up while sitting in a Taco Bell with a case of the munchies, but it's a dream Taco Bell promised would come true. And now, it has. But with limited dates and rooms available, my guess is that once the reservations open they will go fast — so it may be time to set an alarm. Thursday, June 27 is your day — so mark your calendar, cross your fingers, and imagine yourself being lulled gently to sleep in the taco shell of your dreams.