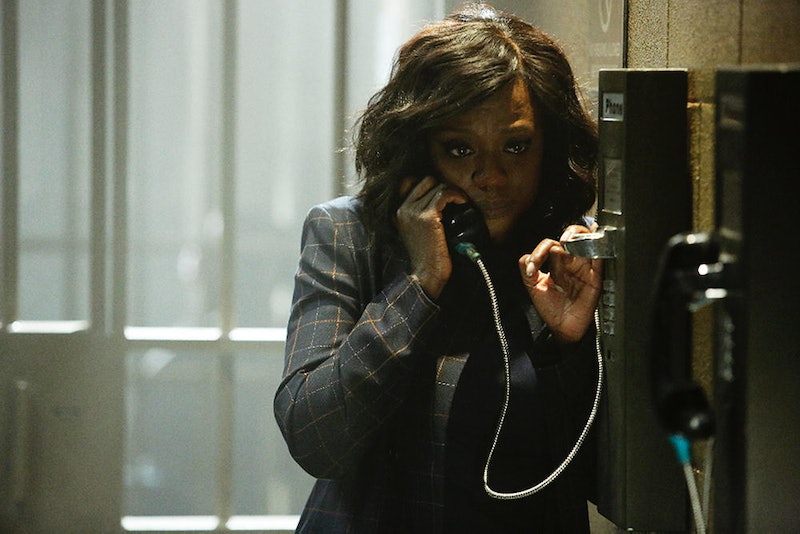 The mid-season finale of How To Get Away With Murder left viewers on their toes, making the wait for new episodes feel longer than ever before. And, beware, as there are spoilers ahead regarding Season 3 of the ShondaLand show ahead. When HTGAWM left off, we finally found out that the dead body in Annalise Keating's house was Wes, which came as a pretty major shock to most; he'd always felt like the center of the show. Now, the show's creator, Peter Nowalk, has promised major changes in Season 3 of HTGAWM, especially since the characters are in a completely different situation now that Annalise is in prison.

Since Annalise has been arrested for causing the fire at her house, which resulted in the death of one of her students, the dynamic between the rest of the group is sure to change. Nowalk told TVLine on Thursday,

All of our sets are suddenly different. Annalise is in a cell. We’re in Bonnie’s house because we can’t be in Annalise’s anymore. Laurel’s in a hospital. And everyone is a satellite unto their own.

Viewers have become accustomed to the team working in Annalise's house, or studying in the classroom, so it's interesting to hear that the second half of Season 3 will see an important visual shift that separates the group in a big way.

Nowalk also discussed the ways in which the group changes following Annalise's incarceration and Wes's sudden death. As well as trying to find a way to get their boss and teacher out of prison, the gang have to come to terms with the loss of one of their best friends:

That’s really difficult because none of the same rules... really apply anymore. But the one thing that hasn’t changed is the characters and their emotional connections.

With different sets, and a completely new set of problems, the HTGAWM team are going to face up to their biggest, and most challenging, problem so far. Annalise is usually the person to fix problems such as this, so the fact that she's locked away spells trouble for the rest of the group. Will Bonnie finally take charge in a big way?

As with every ShondaLand show, HTGAW seems to revel in its shocking twists and turns. According to Nowalk, the character with the most to deal with in Season 3 is Laurel:

Laurel is in a lot of physical pain. She’s found out she’s pregnant. And she’s lost someone she loved. She’s coping with a lot. We’ll get to see a lot of her strength in that process, but it’s also really sad, too.

Laurel's arc is bound to be all kinds of dramatic as Season 3 progresses, especially since viewers don't yet know who the father of her child is. While Wes is the obvious choice because he was dating Laurel prior to his death, my money is on Frank, obviously.

HTGAWM returns Thursday, Jan. 26, and it sounds as though fans are in for a treat.