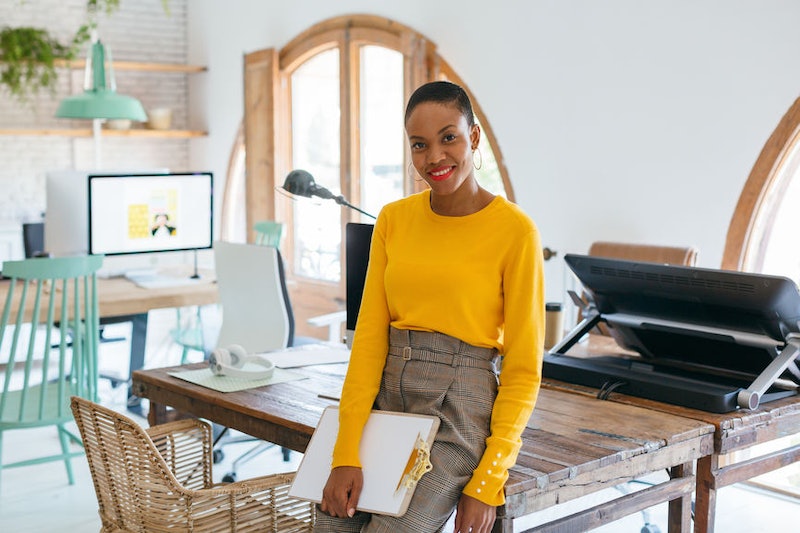 It’s no secret that women, in particular, have a difficult time speaking up in the workplace. Unfortunately, this often leads to female employees becoming overworked, overstressed, and underpaid. With Equal Pay Day on April 2, which is the date that represents how far into the year women would have to work to earn what men earned the year prior (though this date is even later into the year for women in marginalized groups), now is the perfect time to re-evaluate whether you feel you’re getting paid fairly. And if not? Well, it’s time for things to change.

You’ll probably agree that asking your boss for more money is easier said than done. But Shannon McLay, founder and CEO of Financial Gym and advocate for empowering women through finances, promises that practice makes perfect. “Salary negotiation is like a muscle that you have to flex,” she tells Bustle. “Men are more comfortable flexing it than women. In fact, seven percent of women negotiate their salary, versus 57 percent of men.” To the 93 percent: “If you’ve ever regretted not speaking up, you’re not alone.”

One participant from a recent Bustle Trends Group online focus group found herself in this exact position. After her supervisor left, she inherited the extra duties — in addition to her own — with no pay increase. “I accepted the challenge thinking this would lead to a promotion,” she tells Bustle. “I worked extremely hard for a year and received praise from my supervisor and co-workers regularly, and received a glowing annual review. To my surprise, there was no mention of a promotion or a raise, despite the fact that I was doing the jobs of two people for a lower salary.” When she asked about receiving the salary she deserved, her boss informed her that she had earned a shiny new title — but no bump in her paycheck. “I immediately realized that I was not only underpaid, but undervalued,” she says. She eventually resigned and is now at another company that compensates her fairly.

The moral of the story? If you don’t stand up for yourself, employers (and colleagues) can easily take advantage. Below, financial and career experts share their best advice for determining whether you’re getting fair pay, and what to do if you’re not. From navigating wage information to knowing when to look elsewhere, let Equal Pay Day inspire you to become your own advocate.

Find Out If You’re Making A Fair Wage

Thanks to websites like Glassdoor, Payscale, and Ladies Get Paid, salary information is more accessible than ever. Still, there are lots of factors that come into play in terms of each individual’s pay. “Remember to consider the variables like geography and years of experience, which will definitely factor into the possible range,” Priya Malani, founding partner of Stash Wealth, tells Bustle. “Once you've established a range, figure out where your skill set, geography and experience puts you: on the higher end or the lower end?”

2. Consult With Your Network

Whether you have a mentor or you’re connected with industry professionals on LinkedIn, use your network for intel. “Reach out to contacts in your industry — men and women — to find out what’s a reasonable salary for your experience level,” Kelsey Sheehy, a personal finance expert at NerdWallet, tells Bustle. You don’t have to ask how much they make, but chances are, they’ll happily tell you how much comparable candidates are making.

What might be the most accurate way to gauge your compensation can also be the trickiest. But if you’re comfortable asking a co-worker (or two), being honest about your compensation could end up helping you both. “I’m an advocate for actually talking about how much you earn,” Sheehy says. “A lot of people think talking about money isn’t ‘polite’ conversation, but I think that mindset serves companies more than their employees. I was able to negotiate a higher salary at my first job because I knew what my colleagues, who I interned with, were making.”

“If you find out teammates make more than you for a similar job, I would not be discouraged by this,” McLay says. “I would see it as an opportunity for you to reach this goal yourself. It’s even better than Payscale or Glassdoor, if you know exactly how much you could make in your position.”

Ask For A Raise

Polly Rodriguez, co-founder and CEO of Unbound, a sexual wellness company, has been on “both sides of the desk.” Formerly an analyst at a consulting company, the now-boss advises against demanding a raise, guns blazing. “Once you've gathered your research [on fair salaries], put that in your back pocket to use only if you have to,” she tells Bustle. “In my experience, employers are far more likely to willingly give a raise based on merit.”

To prepare for the meeting, Sheehy says, “Compile a list of ways you’ve helped move the needle for your team and your company. Concrete numbers are great here — you brought in X amount of new business or increased social media engagement by X — but not every accomplishment has metrics, and that’s OK.” She adds, “I like to keep a running list of ‘wins’ in a Google doc. It can come in handy during performance reviews, promotion discussions, or even updating your resume if and when you decide to change jobs.”

Once you have your ducks in a row, request a one-on-one meeting with your boss. From her experience as a leader, Rodriguez recommends giving them an inkling as to what’s to come. “Simply ask if it would be OK to set up a meeting to discuss compensation,” says Rodriguez. “You want to make sure you're giving your employer the opportunity to feel like they're not walking into the meeting blindsided. And, when presenting your case, you want to clearly lay out your recent accomplishments and wins so that your boss feels compelled to give you the raise.”

“We always advise clients to put themselves into the shoes of the decision maker,” says Malani. “If you were them, what would you need to see from someone who was asking for a raise? Have a meeting with your manager, state your intention to progress in your career, not just in terms of money, but also the value you bring to the company. Work with your manager to set goals that would indicate a raise was warranted and then over-deliver.”

All companies have a bottom line, and sometimes, they simply can’t accommodate a salary bump. If this is the case, see where else you can negotiate; maybe you can score another perk, like a flexible schedule or an extra week of PTO. “I had a client who asked repeatedly for a raise, and the company said they couldn’t afford it,” McLay says. “She asked if she could do Remote Year as a benefit, and the company agreed.”

What To Do If Your Request Is Denied

Hope for the best but prepare for the worst, and if your request is denied, don’t let it lead to an on-the-spot resignation. Instead, ask for constructive feedback so you can improve. “If you do not receive a raise based on merit, then it's time to present your market-based research and ask why you're being paid lower than standard,” Rodriguez says. “Keep in mind you may not have all the information, so you don't want to accuse your employer of underpaying you; rather, you want to give them the opportunity to provide an explanation.”

In any case, “always ask why,” says Sheehy. “You’re entitled to an explanation.”

If the denial is because company finances are tight, ask to revisit your request in a few months, when there may be more cash to spare.

“If the company is not willing to discuss any options with you, it may be time to start looking for a new job,” says McLay. “I always say that your relationship with your company is like any other relationship: it should feel as though it’s mutually beneficial and you’re treated with respect. Your value doesn’t always have to come in the form of salary, but you should work for a place where you feel valued and respected.”

Sheehy adds, “If it’s clear there is no potential salary growth, polish up your resume and look for a company that will value your work. Don’t just up and quit, but make an exit plan and start the job hunt armed with your wage research and newfound salary negotiation skills.”

Money is a notoriously tricky subject to broach, but you deserve to know if you’re getting paid a fair wage. Don’t let the taboo intimidate you; you have every right to negotiate your salary, ask for a raise, or at the very least, receive an explanation behind the amount that’s on your paycheck. As the Bustle Trends Group participant puts it, “You have to be willing to speak up for yourself. Fight for the things you deserve, like fair pay and equal opportunity. If you're not receiving it, move on. There are bigger and better things out there for you."

More like this
5 Ways To Stand In Solidarity With Women In America From The UK
By Sophie McEvoy
How To Fight For Reproductive Rights, Based On How Much Time You Have
By Courtney Young
What Is the Net Worth Of Each 'Stranger Things' Season 4 Cast Member?
By Hugh McIntyre
Howard Stern's Net Worth: Is He The Richest Man In Radio?
By Hugh McIntyre
Get Even More From Bustle — Sign Up For The Newsletter