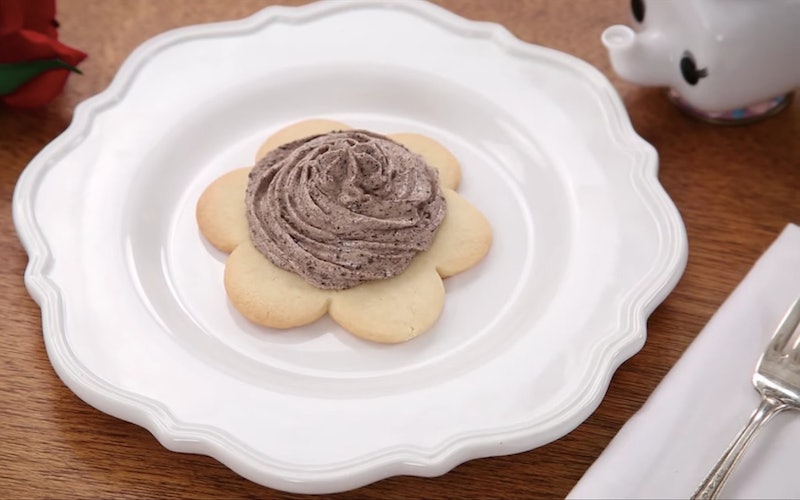 If you've ever listened closely to the lyrics of "Be Our Guest," in Disney's Beauty and the Beast, there's the high probability that you've raised your eyebrows in confusion. At one point in the song, Lumiere sings, "Try the grey stuff, it's delicious. Don't believe me? Ask the dishes." And while the child-version of you was jamming along contently, adult-you is likely a little more skeptical as to what exactly "the grey stuff" is. Well, you don't have to wonder anymore. Disney released the recipe for "the grey stuff" — and it's a delicious dessert you'll want to try.

While it's unsure if Walt Disney had any idea himself what "the grey stuff" was while creating Beauty and the Beast, the chefs at Disney Parks have creatively taken it from a line in a song to an actual creation.

Essentially, "the grey stuff" is a combination of cookies and cream sandwich cookies, vanilla pudding, and whipped cream all served on top of a scalloped cookie. The creamy concoction has been served at the Red Rose Tavern in Disneyland, as well as at the Be Our Guest restaurant in Disney World. And now, you have the chance to serve it right on your own dining table.

"The grey stuff" is as simple to make as it looks. All you need is milk, instant vanilla pudding mix, cookies and cream sandwich cookies, whipped topping, instant chocolate pudding mix, and scalloped cookies. Even with mixing, whisking, and chilling the dessert, the entire treat only takes 15 minutes to create. Just make sure you have a food processor, a whisk, and a piping bag to help make the dessert look as good as possible.

Due to social distancing, many of us have turned to baking and cooking in the midst of quarantine. And Disney has been a source of inspiration and support during this time. Just since many stay-at-home orders went into effect in mid-March, Disney has released several different recipes to their most famous theme parks treats online for fans to try at home. Some of the recent ones include its cheddar cheese soup, plant-based cookie fries, and Walt Disney's favorite chili.

While all of Disney's parks and attractions are closed indefinitely to ensure the safety of citizens amidst the pandemic, the company has been consistently releasing content on its blogs to help customers get through their time social distancing at home. From recipes like this one to interactive content for parents to try with their kids, Disney has been finding ways to appeal to customers even when they're staying within the confinements of their homes.

If you've looked at Disney's other recipes and deemed they were too complicated or too time-consuming for you, "the grey stuff" is the perfect thing for you to make. It's simple, it's quick, and like Lumiere says, "It's delicious."