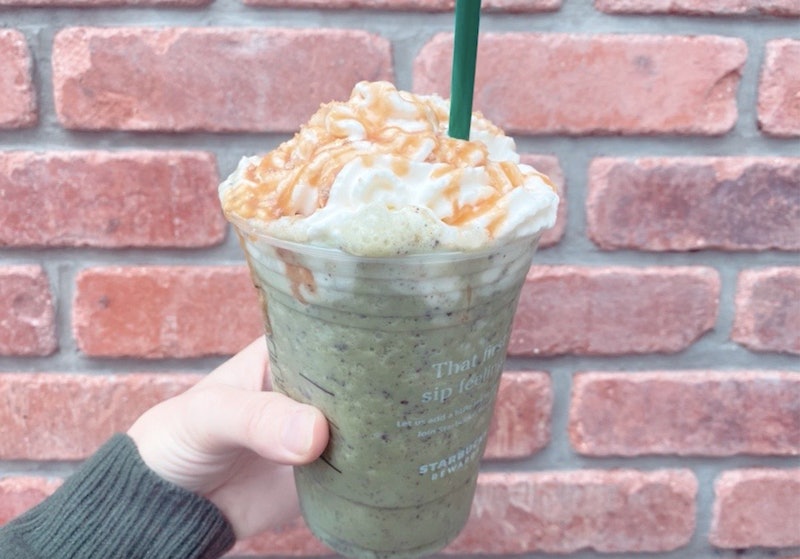 As someone who would much rather blame all of my problems on planetary alignments than use them for moments of personal reflection or self-betterment, I'm upsettingly delighted to inform you that Mercury retrograde starts on Oct. 31. For those unfamiliar, when Mercury goes into retrograde, it allegedly messes with all things convenience, including and not limited to communication, travel, and technology. And while we cannot protect our mere mortal selves from Mercury's wrath, we can at least attempt to self-soothe with the balm that is the Mercury Retrograde Frappuccino on the Starbucks secret menu.

The first thing you need to know about this drink we created is that, like Mercury, its brand is sheer chaos. It was truly divisive among the Bustle staff who tried it, but I stand by our choices. We started with a base of the Matcha Green Tea Creme Frappuccino, and with good reason — matcha has a history of being associated with calming qualities, which was recently even explored in a study that found an anxiety reduction among matcha-consuming rats. Admittedly, you are a human, but in the face of Mercury you'll need all the chance at calm you can get.

After that we added three Frappuccino Chips to give it a starry, planetary look, and a whole banana (Yes, Mercury! An entire banana! Who's the chaos demon now??), primarily because Mercury makes your life bananas. We kept the whipped cream and drizzled it with caramel drizzle for an extra sweetness to make the fear of retrograde go down easier, and topped it smoked sea salt because we're all salty for having to feel that fear in the first place. And thus, this beautiful monster was born.

I've included a screenshot of how we ordered it in the Starbucks app for your reference, and also because I was too much of a coward to order it to the barista's face (despite the fact that she was incredibly kind about it, and let this be your reminder to be extra nice and tip your baristas accordingly when you ask for drinks as complicated as this one). For the record, I thought it tasted like glorious matcha banana frozen pudding; but also for the record, two of my coworkers made the kind of face drinking it that Mercury probably makes when she sees a fully functioning laptop during a retrograde (read: unhappy face).

As you will have noted up top, this Mercury retrograde ups its spook factor by starting on Halloween — bold of her, if I do say so myself. There are plenty of rituals you can take part in to help ease yourself into Mercury's shenanigans, and even full-on Mercury retrograde costumes if you really feel like leaning into the spook. But I personally will be riding out Mercury retrograde the way I ride out most problems life throws my way: with a dessert as large as my face. I hope that the Mercury Retrograde Frappuccino can be that dessert for y'all, too.