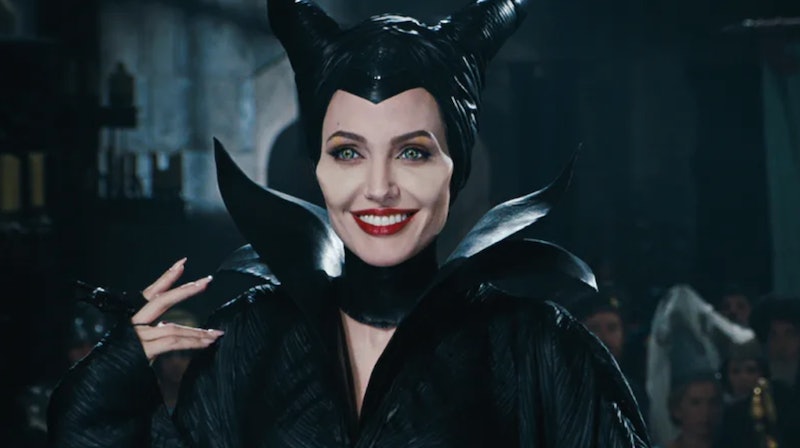 We’re still riding high on the whole Spooky Secret Menu Starbucks Drink wave that’s swept the coffee-loving community this fall, here’s a fun new one to add to the list: I just learned how to order a Maleficent Frappuccino at Starbucks — a drink which was, for a brief time, available only at the Disneyland Starbucks located inside the Market House on the theme park’s iconic Mainstreet, USA entry world. Thanks to social media, though, we now know not only about its existence, but also what the drink's actual recipe is. Isn’t the internet great?

Part of a small collection of Disney Villain-themed drinks offered at this specific Starbucks location recently (others included Dr. Facilier's Elixir), the Maleficent Frappuccino consists of a combination of Vanilla Bean Crème Frappuccino, dragonfruit, and blueberry juice topped off by a cloud of matcha whipped cream. The result, a purple-and-green frozen concoction, calls to mind the Sleeping Beauty villain’s distinctive color scheme — hence the drink’s name. No wonder so many people posted about it on social media; it’s as Instagram-worthy as it is delicious!

What’s more, even though the Maleficent Frappuccino was specific to at least one Disneyland Starbucks, the recipe has since made its way to the internet — which means you can order it even if you’re at Disneyland. Since it’s not actually on the Starbucks menu, though, you’ll have to place a somewhat creative order if you want to try one. For context, here's how it looks from the Disneyland Starbucks, courtesy of Instagrammer disneylandfood_.

Do not try asking for it by name; as is always the case with so-called “secret menu” items, your barista won’t know what you’re talking about if you just roll up to the counter say, “Hi, I’d like a Maleficent Frappuccino.”

As you’re placing it, your order will probably sound something like this: “Hi, I’d like a Grande Vanilla Bean Crème Frappuccino with dragonfruit and blueberry juice blended up with it, topped with whipped cream and matcha powder.”

If you’re wondering how this drink came into being, though — or if you’re only just hearing about it now and can’t figure out how you missed it — here’s the deal: Every so often, some of the Starbucks stores located in and around the Disney parks offer exclusive, Disney-themed drinks that are only advertised at those specific Starbucks locations. Who creates them? That’s not always clear, but it’s most likely the baristas working at those stores. You’ll rarely — if ever — see these drinks posted on official Starbucks channels; knowledge of their existence spreads pretty much exclusively by chalkboards or signs placed at the stores that offer them, as well as by word-of-mouth — as was the case with the Maleficent Frapp, which hit Instagram earlier in the fall.

Since “word-of-mouth” these days includes the entire internet, it’s easier than it used to be to find out about these drinks; they pop up from time to time on both Starbucks- and Disney-oriented sites, as well as within related online communities (I frequently see them in the Leaf Rakers Society Facebook group, for example). And, of course, it’s also easier than ever to find out what’s actually in them. This last point is key if you want to try one, but don’t happen to be heading to a Disney park anytime soon: Since these unique drinks aren’t part of the standard Starbucks menu, baristas who don’t work at the stores shilling them aren’t trained in how to make them and therefore won’t be able to give you one if you just ask for it by name.

But since the Starbucks menu is absurdly customizable, you can team up with a willing barista to try recreating these Disney-specific drinks, as long as you know what goes into them. Whether you’ll be able to replicate the recipe exactly will depend on whether your local Starbucks has all the ingredients that go into it in stock, of course; if they don’t, you can try getting creative with your own substitutions. It’s also worth noting that you’ll be better off ordering these kinds of drinks in-store, as the Starbucks app places some limitations on what you can get by how the whole ordering system works.

If you do opt to try ordering the Maleficent Frappuccino — or any other off-menu drink at Starbucks — go slowly, have patience, and be prepared to walk your barista through it as you go if needed. Also, you might want to avoid placing an order like this at a time when the store is really busy; please don’t be that person who holds up a whole line of people who just need their regular caffeine fix by being a stickler over a complex, highly customized order.

Otherwise, though, have fun, kids. It is spooky season, after all — and what’s Halloween without a few tricks and treats?