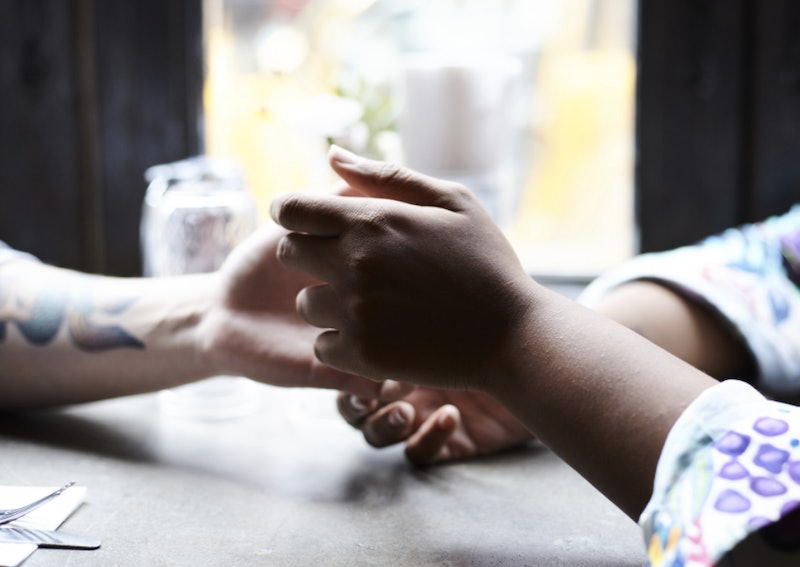 As March 8 fast approaches, many women planning to participate in the general strike announced by the organizers of the Women's March are wondering how to spend "A Day Without A Woman" if they can, in fact, take the day off work. On Sunday, the organizers of the general strike sent out an announcement addressing how exactly women could engage in the strike, which include participating in one, two, or all three of the following ways:

Bustle spoke with Winnie Wong, one of the activists instrumental in assembling the Women's March in January, who is involved with some of the many aspects that are going into the events planned on March 8.

"[T]he reality is March 8 is International Women's Day, so there's plenty of activity happening around the world in support of that day of action anyway, and that's been a day of action for many years," Wong tells Bustle, referencing protests and town halls and other local events that will be planned in cities across the world that day; despite the title of the day, not all of the action will be centered around the strike.

For many, the three points of action listed in the announcement were a partial answer to concerns about whether or not the strike had a privilege issue, as only some women would be able to take a day off work — and for many others, familial and financial obligations would prevent them from participating in the first suggestion for the strike. However, the fact still remains that it is partially exclusionary to those who want to participate in the first suggestion for the strike; for many women, particularly those in marginalized groups, taking the day off work may come with a lot more risk of retaliation from employers.

So if you are able to take the day off, how exactly should you spend it to make the day as productive and meaningful as possible — and more importantly, how can you support the women who aren't able to participate in the traditional strike?

"If you have great privilege, you should support another woman who doesn't have as much privilege as you do," says Wong.

For those who can take the day off who are looking for ways to support and advocate for other women during the strike, here are four ways to do just that.

Relieve Another Woman The Day Of The Strike

While the strike organizers encourage male allies to step in and take over caregiving duties the day of the strike, many women don't have that option for relief, whether they are single-parent homes, cannot financially afford it, or are caregivers to dependents aside from their own children.

"[S]how up for each other, participate if you can. Definitely offer your privilege to a woman who doesn't have as much privilege as you in helping her," Wong tells Bustle. Wong suggests actions like offering care to other women, or helping take over some of their responsibilities that day.

The reality of Day Without A Woman — as powerful as the concept may be — is that there are many paid and unpaid women who simply don't have the option to walk away from their obligations. On a day that it is more crucial than ever for women to support other women, take this strike as an opportunity to look out for someone who might not be able to participate in the traditional sense.

Go Out And Protest, Or Attend Local Events Centered Around The Strike

Another way to use your privilege if you are able to take the day off during the strike is to go out and advocate for the women who cannot. Keep your eyes peeled for protests and local events like town halls that will be scheduled the day of the strike. Call your representatives. Speak out in ways that will help women, particularly marginalized women, by advocating for the issues that affect women most, from fair pay to access to affordable childcare to family leave to strengthening legislation that protects women from discrimination due to race, religion, sexuality, or disability.

Continue to do this beyond the strike, of course — because as we are all aware, this is a marathon, not a sprint — but certainly use any free time you have that day to devote to doing just that.

Educate Yourself Even Further About The Issues At Stake

Maybe you're well-versed on all the issues at stake, or maybe you're overwhelmed by the political sphere but no less eager to help. Either way, the day of the strike is an excellent time to either get more involved in conversations that are happening in less public spaces, or start to gain a more thorough education. The more informed and aware we all remain of the issues at stake and the importance of understanding how to make our feminism more intersectional, the more effectively women can use their privilege to amplify the voices of those who are culturally or socially marginalized in society. Here's a list of intersectional, feminist podcasts and websites that are helping keep people aware of what is happening and how to help.

"[I]t's really about understanding that this is a great time for examining our privilege as women and seeing how we can support each other. Because really, when people ask me this question: 'Why was the Women's March so successful? Why was the organizing so big? Why was it so big?' It was because it really was all women," Wong says to Bustle. "Why were we able to write this monumental policy document with 18 people over Google? Because we were all women. We heard each other. We listened to each other."

Just because you don't have the time to do outreach on a national level doesn't mean that you can't become an activist in your own community. Gather with a group of women, be it in someone's home who can't strike so they can be involved, or a coffee shop near someone's work, or — better yet — even on a Google document of your own, so everyone can participate. Then lay down the groundwork for action that you can take even as a small group, making calls or organizing fundraisers for worthy causes or even leading local protests, so that there is a way that all of the women involved, regardless of their circumstances, can participate in some way.

To learn more about the women's general strike and how to participate in the day's events, head to their website here.