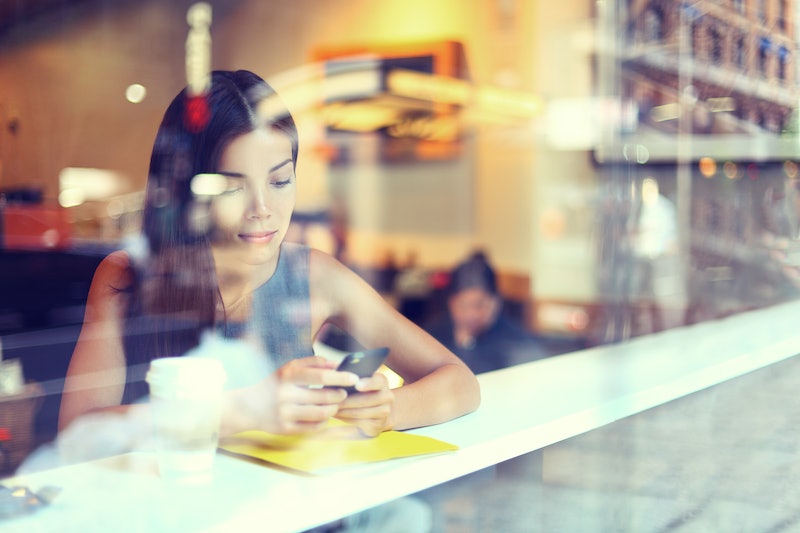 Insta-stalking. Not only is it discomfiting that such a thing exists — wow, is it not productive, especially when it comes to an ex or a crush gone wrong. It feels like a real need sometimes, to watch all their best friend's stories, and go through each picture they've been tagged in, to reminisce, perhaps, about your times together. But how do you stop obsessing over your ex and being so attached to their social media? Especially if you do it despite the fact that it makes you feel kinda-a-little-bit so, so gross?

"It's really hard to stop cyberstalking an ex, because 'hate following' someone lights up the same exact parts of your brain as falling in love — the putamen," Kelsey Torgerson Dunn, MSW, LCSW, an anxiety specialist and owner of Compassionate Counseling St. Louis, tells Bustle. "It's true. There is such a thing as a hate crush."

A study at University College London discovered that the hate circuit includes two parts of the brain found in the sub-cortex: the putamen and the insula, Torgerson says. The putamen is a part of the brain scientists already know has to do with contempt and disgust, and may also be involved in the motor system, which is the part of the brain that controls movement or action.

The insula has been shown to be involved in responses to distressing stimuli, Torgerson says. "The surprising part is that according to neurobiologist and head researcher Professor Semir Zeki, 'the network involves regions of the putamen and the insula that are almost identical to the ones activated by passionate, romantic, love.'"

Thus, she says, following someone you might have negative or intense feelings for, like an ex, becomes an incredibly habit-forming behavior at a neurological level.

On top of that, the more times you choose this behavior, the more second nature it becomes. If you notice yourself clicking over to your ex's Instagram anytime you are reminded of them, it's going to become a habit.

"Habits are hard to break," Torgerson says, "especially if those habits are reinforcing your feelings in some way." Even if they aren't happy, liberating feelings. "If you wish you could stop engaging in this behavior, and you don't, many times you'll end up feeling worse about yourself and what you're doing," Torgerson adds.

Insta-stalking damages your ability to move forward and keeps you focused on your past relationship, rather than being open to new relationships, romantic or otherwise. It can also take a real toll on your self-image, since Instagram stalking is usually based on comparing yourself to what you see.

"If you feel triggered to do it, recognize that this is a perfectly normal and understandable urge," Torgerson says. "But take a step back and figure out what thoughts or feelings are motivating the behavior. Then figure out if you want to listen to those thoughts and check their social media, or, if you'd rather do or tell yourself something else."

Continue to help shape your behavior in the future by unfollowing them and creating a replacement behavior instead, Torgerson says. She suggests that when you get the urge to check their page, you could take a five-minute walk outside instead. And if your initial replacement behaviors don't work, just keep trying news ones.

"The more you choose a replacement behavior, the less strong your urge will be," Torgerson says. "You're re-training your brain."

Do be gentle with yourself, she advises, if you slip up and get back into the habit. It's normal, and berating yourself only doubles up on the bad feelings.

Relationship expert and professional matchmaker Channa Bromley tells Bustle that taking a break from social media in general is also a really good idea, as is defriending and blocking the ex whose account you keep looking at. Furthermore, getting rid of anything that reminds you of them, as well as cutting off contact with them entirely, is another way to create the necessary distance to heal.

"Reach out to friends and family for support, stay active and social," Bromley says.

Allowing yourself to do things that make you happy, or even asking yourself that question and beginning to figure it out, can rebuild that sense of self that might be taking a hit when engaging in obsessive behaviors like Insta-stalking.

"Ask for professional help if you feel like you need it at any point," Bromley says. "Letting go of obsession can help you find really healthy and reciprocal love."

No matter where you feel that you are right now in terms of your feelings, Bromley says, you can move on. It's true, my heartbroken friends. The pain will be relieved — it just takes time — and a little willingness to shift away from the very real intensity of those habits.