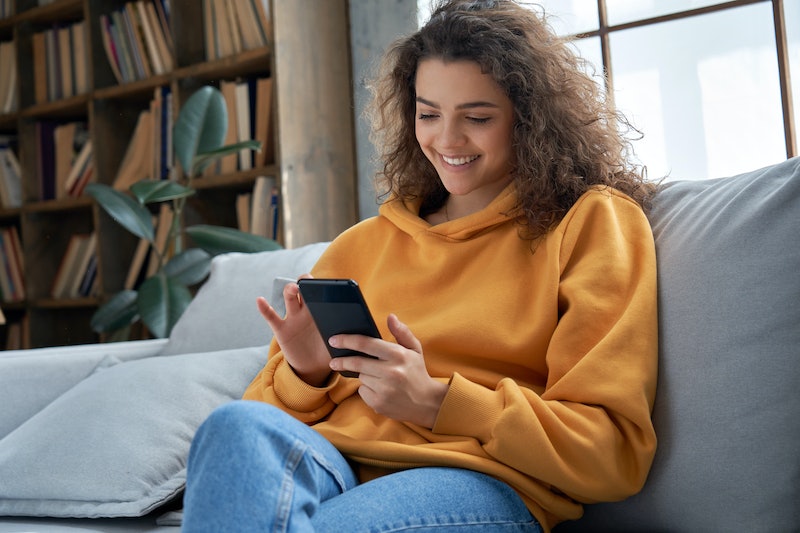 "Change starts with conversation." This sentiment has been one of many echoed over the past weeks in response to the killings of Breonna Taylor, George Floyd, Tony McDade, and Ahmaud Arbery. You've likely been talking a lot about race with peers and family. But you can also continue talking about Black Lives Matter on dating apps, in order to make sure your values align with those you're interested in dating.

OkCupid has also updated its matching process with new questions, including, "Is it important that your date fights for racial justice?" and "Do you protest to fight inequality?" The goal is to help you connect with others who actively support Black Lives Matter, while also making it easier to talk about. But if you can't add a badge or you're still not sure how to bring up the topic, here's what experts think.

If starting conversations about anti-racism is new for you, it can help to ask a match direct questions, says Melissa DePino who, along with Michelle Saahene, founded From Privilege to Progress (P2P), a national movement to desegregate the public conversation about race. After the usual getting-to-know you Qs — how's it going, where do you work, where did you grow up, etc. — go ahead and dive in.

Start with a question like, "I went to a Black Lives Matter protest this past Saturday. How have you been getting involved?" As DePino tells Bustle, "It’s always a good practice [on dating apps] to put something out there about yourself, then ask a question to find out more about the other person."

Yai Vargas, a diversity and inclusion consultant, says you could also start things off by asking how they've been holding up. Something along the lines of, "Hi! I hope you're doing as best as possible during these times of racial injustice. How are you doing with this and in general?"

DePino also recommends making honesty a priority, just like you always should on dating apps. "If you’re living with racism in your daily life, start there," she says. "If you just started on the path to anti-racism, say that. If you read White Fragility with a highlighter last year and that's where you are, you can say that, too."

By having this conversation, you'll not only learn more about Black Lives Matter, and how you've both been furthering the movement, but also where you stand values-wise. And that is, after all, of utmost importance when it comes to connecting with someone on a dating app.

What To Do If They Say "All Lives Matter"

Keep in mind, it's 100% OK to have this conversation, even in a space (read: a dating app) where you've likely gotten used to chitchat. So, don't let fear of change or discomfort hold you back. If your match happens to disagree with you — and sadly, there's a chance that will happen — it'll be up to you to decide how to proceed. You can promptly unmatch, or as Vargas says, "Wish them well and keep swiping!"

If they respond by saying something like "all lives matter," see if they'd be willing to talk about why. While it may not be possible to change a stranger's mind on a dating app in a short conversation, it can be worthwhile to engage them and challenge their assumptions.

"Anything we do in our daily lives to show up against racism propels the movement forward," DePino says. "Having the hard conversations and living in our truths — even on dating apps — is a step in the right direction."

Melissa DePino, co-founder of From Privilege to Progress (P2P)

More like this
I Spent 2 Years Trying TikTok’s Dating Advice
By Kailynn Johnson
The 3 Zodiac Signs Most Likely To Get Married Later In Life
By Kristine Fellizar
Why Being “Too Sensitive” In Relationships Is A Good Thing
By Lexi Inks
12 Active Date Ideas That'll Get You & Your Boo Outside
By Lexi Inks
Get Even More From Bustle — Sign Up For The Newsletter
From hair trends to relationship advice, our daily newsletter has everything you need to sound like a person who’s on TikTok, even if you aren’t.