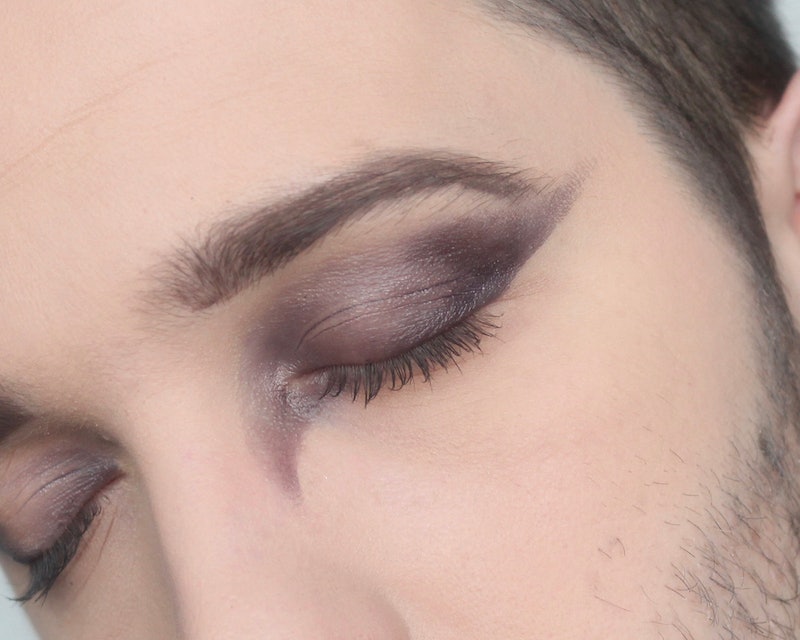 Now that the weather is finally warming up, more and more spring beauty products are launching each day. Beauty lovers have got a lot of great new things to look forward to, but the one that kept catching my eye was what the internet deemed the new "black highlighter," or the "anti-highlighter." You've probably heard of it, too — it's this week's viral beauty product. But how do you use the new Rituel de Fille's New Eclipse Black Créme Pigment?

If you've been paying attention, this isn't the first black highlighter we've seen. Jeffree Star released his version of a black highlighter for Halloween 2016. It was a shimmery black powder that was as versatile as, well, all other powders. But a highlight it was not. And, actually, neither is this one.

The thing is, Rituel de Fille never referred to their product as a highlighter. Fake news! What they did say, is that can be used as blush, contour, cream eyeshadow and lipstick, which is much more realistic. Repeat after me: We will never highlight with black. And that's coming from me, who will highlight with anything.

So what is it?

Bust this little guy open to reveal a pan of black with a little wave of blackened purple if the light hits it just right.

It's a cream pigment, just like it says! Plain and simple. Think of a cream blush, or a lip and cheek multiple. The product itself isn't breaking any ground here, but the shade.

I thought I knew what I was getting myself into with this, and truthfully, I wasn't too excited about it. Once I got down to business, though, I realized just how versatile this product is, and how it is just the thing I need to achieve my favorite aesthetic: Summer goth.

For starters, I thought I was gonna swatch this and see a deep aubergine. You know, like all of those lipsticks that look black on the bullet but are actually a sheer, deep red or purple on the lip? Yea, I was wrong. This baby is black.

It's not a true black, though. If you really look, it's more of a charred eggplant, cool-toned and sheer. It's basically as dark as something can get without actually being black.

The thing I like about the shade, specifically in this formula, is that you can take it from sheer to opaque and back again without too much effort, but the finished result never has to be perfect. In fact, it looks best when it's just a little undone. When Eclipse is built up, it's a sooty gray, when it reaches opacity, it's a greasy black. You can apply and blend it however you like, but you're not trying to get FaceTuned, Instagram-worthy perfection from it.

So I grabbed a liner brush and drew a line across my lash line, surprised at how nicely the cream pigment worked with a brush. It applied just right, not too black, but not too sheer. I then took it about a third of the way onto my inner and outer corners, and with more of the product on my pinky, absentmindedly blended, to get even coverage, and then diffuse it out. I wanted a dark, halo effect, and that's exactly what I got.

Simple? Yes. Gorgeous? Yes. And for someone who hates spending any time on their eye makeup (me) this is a very ideal look. It blends out as easily as it builds, and no matter how much of it you've got layered, and sits nicely. I've been known to wear layers of cream highlight, for instance, and there's only so much of a product you can wear before it refuses to set. This did what I needed it to do and looked great doing it. Save for a bit of minor creasing on the lids, it stayed where I put it and looked great the whole time I had it on.

Next, I wanted to have a little more fun. Winged eyeliner is hard to pull off on my hooded lids and low-set brow bone, but what about like, a bat wing? I don't know dude, I just needed to introduce this look.

To get that wing really crisp and clean while creating a gradient beginning to end, I did a more saturated halo with less negative space on the lid. Then, I used the same pencil brush to trace that point down the bridge of my nose then sheer it out with my finger. Finally, I added tape from my waterline onto the side of my face, and just flung that wing out.

I love how that turned out, and I also love that it look me like, nine seconds. Seriously. I'm pretty good with makeup, but more graphic things like this typically take more of a minute. Good products and tools help make things much easier, and this cream pigment builds and blends seamlessly.

I was anxious to see this sheer black on the lips, so I simply tapped a layer of pigment evenly over them.

Again, perfection is not what we're going for here, and you're not going to get a perfect lip using just your fingers, and that's fine! I like the blotted look, especially with how dark it is, almost like I was sucking on a goth popsicle.

Pretty great, right? Normally, I'd use a black liner or a dark purple for this, but this is a multiple so it is our duty to use it in a few ways.

Speaking of other liners, I wanted to start seeing the transformative powers of this product. We know it's already a stunner on its own, but how's it gonna look when layered?

As I said, it would be stunning with a dark liner, but what about a PINK?

This is the Scandy pencil from ColourPop, an insanely bright hot pink, and filled in my lips with it. Isn't it gorgeous? I thought Eclipse over this pink would be a challenge, and I never met a challenge I didn't like.

I concentrated the pigment more around the outside again, obviously, and while I loved it over bare lips, I think I like it even more over a liner. It seemed to sit a little more evenly, and sink into the liner, making it a lip color all its own.

Then I grabbed Rituel de Fille's Rare Light Luminizer in Ghost Light (which is sooo good btw) and tapped it over the lips for a more ethereal lip.

I'm really not about ombre lips because to me, it's like, we get it, you've seen an episode of Drag Race, but I'd be lying if I said I wasn't all about the iridescent lavender sheen that Ghost Light added.

But what about over eyes? I took some extremely bright cream pigments and worked them onto my lid, crease, and brow bone. I'm talking hot pink, bright coral, ultraviolet, and an intense lavender, to see if Eclipse would tone down even my brightest colors and still be wearable. There's some Ghost Light Luminizer on the inner corner and brow bone, too. Also sorry that it looks like I did my brows with a crayon.

What I love about this is not that it muted the brights, but that it did so without moving them around or feeling gummy when layered on top of them. This is, in part, due to the fact that the cream products were very matte so they're not very emollient, which was a great start, but the black pigment applied without blurring them or making everything patchy.

A note about the lids, use the pigment over creams, not pressed powders. I know this is sort of Makeup 101 but a quick reminder never hurts.

The overall verdict? Truthfully, I thought this was going to be a gimmicky product and not much more, but really, I love how it works. It's versatile, yes, but more than that, it's comfortable and easy to wear, no matter where you are wearing it. Everything I did in these photos I could totally wear out for a night without worrying if it's fading or smudged.

Whether you're going for a full summer goth moment like me, or just want a little darkness and dimension in your usual makeup the Rituel de Fille Eclipse Black Créme Pigment is a great addition to anyone's makeup collection.