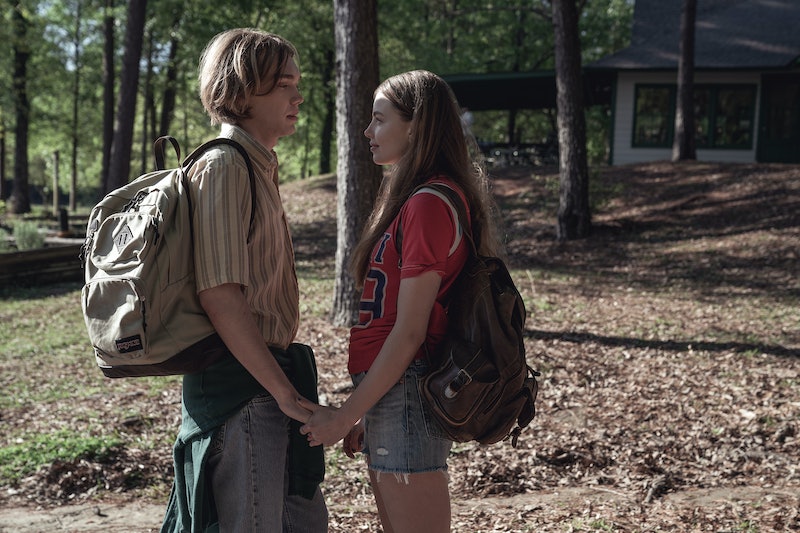 For those in need of a little bit of escapism, what's better than delving into a young adult book? Fictional accounts of times and feelings that you can almost definitely identify with. Who am I? What is life? Why does nobody take me seriously? Why am I so horny all the time? Concerns that probably still plague you long since the din of adolescence has quietened its noisy roar. And dramatisations of such novels are always super lit. So I'm sure that John Green fans will be eager to find out how to watch Hulu's Looking For Alaska in the UK.

Update: Deadline has announced that Looking For Alaksa will debut "day-and-date with Hulu," becoming available online via BBC Three from 10 a.m. on Oct. 19 2019, the day after it airs in the U.S. All eight episodes will be available at that time.

Previously: As Bustle has previously reported, Looking For Alaska is set for limited release over in the U.S. on October 18, 2019. So, only a few weeks to wait for those over in the U.S., but what about us Brits?!

I contacted Hulu for information on this and will let you know as soon as I hear anything at all. However, I'm going to be real with you and say it's not looking good for Green stans right at this moment as there is no information out there about an upcoming screening on any UK television network nor streaming platforms. Which is sadly a bit of a recurring theme with our friends over at Hulu. Shrill anybody? Or how's about Veronica Mars season four? Why I oughtta write a strongly worded tweet!

So, the new series is a guaranteed hit with Green fans. The show is based on his first novel of the same name. Since Looking For Alaska, Green has gone on to write other smash novels such as The Fault In Our Stars, Paper Towns, An Abundance of Katherines, and Turtles All The Way Down.

Looking For Alaska has been adapted for screen by the indomitable Josh Schwartz, who you might know, love, and quite frankly owe a drink for creating XOXO, Gossip Girl. It will be an eight-part series and sure to hit all of those teen drama needs you know you have.

The story of Looking For Alaska follows Miles "Pudge" Halter, who is keen to learn more about life. Eager to leave his safe family cocoon and go and find what the dying poet Francois Rabelais called the "Great Perhaps," he enrols in an Alabama boarding school and it's there that he meets and falls in love with the intoxicatingly interesting and beautiful Alaska Young. As well as his growing feelings for Alaska, he also makes a core group of friends and they all find solace and support in one another after an unexpected tragedy throws their whole world off kilter.

Pudge will be played by Charlie Plummer who you might recognise from Boardwalk Empire, All The Money In The World, and Lean On Pete. Alaska will be played by Kristine Froseth who you probably know best from The Society and Sierra Burgess Is A Loser.

The show is likely to be a hit with fans of all ages and just the ticket for heading into autumnal hibernation after a hot steamy summer.