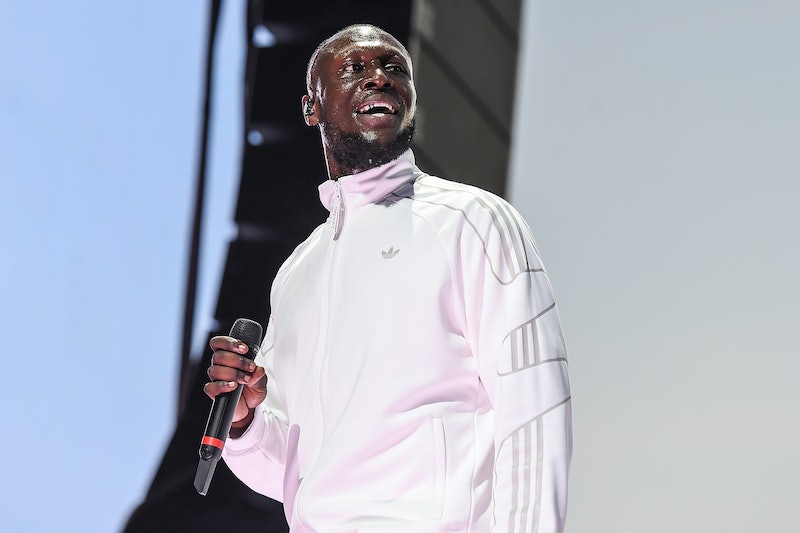 One of the worlds biggest and best music festivals is happening this weekend, and the headliners are a mixture of ageless rock legends, and new, talented, cultural sensations. This year, grime superstar Stormzy will be headlining Glastonbury on the Pyramid Stage. But for those of us who weren't able to snag a near-impossible-to-get ticket, and must instead live vicariously through the TV, this is how to watch Stormzy's headline Glasto performance.

Stormzy will be performing on the world-renowned Pyramid Stage on Friday evening between 22:15 - 23:45 and BBC Two will be showing his headline set live. In fact, BBC One, BBC Two, and BBC Four will be broadcast a whopping 30 hours of coverage from the grassy hills of Somerset. So you don't have to miss out on a second of performances from Glastonbury, simply watch back on BBC iPlayer or live on TV. On top of that, Radio 1Xtra, Radio 2, Radio 5 live and 6 Music will be covering Glasto too.

Glastonbury announced Stormzy as the first 2019 headliner back in 2018, followed by The Killers, and The Cure. The 25-year-old is the first grime artist to headline the 48-year-old music festival. Other icons who have performed on the Pyramid Stage include Radiohead, Amy Winehouse, Stevie Wonder, David Bowie, and Florence + The Machine.

At such a young age, this is a mammoth achievement. Sadly, some fans of the festival claim grime doesn't have a place headlining at a festival historically known for rock music. But as the years have passed, Glastonbury has gradually begun to cover a plethora of genres. In 2011 Beyonce performed on the same stage, Kanye West headlined in 2015, as did Jay-Z back in 2008, all receiving similar backlash, even though they delivered great performances (maybe not so much Kanye).

Stormzy rose to fame with singles Shutup, and Know Me From before releasing his debut solo album Gang Signs & Prayers in 2017 to critical acclaim. The messages in his music are normally pro-black and political, often coinciding with big political moments happening in the UK like Brexit. At the 2018 Brit Awards, he even called out Prime Minister Theresa May over the unanswered questions many still have over the devastating fire at Grenfell, proclaiming on an international stage, "Theresa May, where's the money for Grenfell?"

But Stormzy doesn't just stop at music, the award-winning artist has also gone on to use his fame for some serious positive action. In 2018, he funded a scholarship to help get two black students into University of Cambridge, in the hopes of making one of the world's top universities more accessible.

And as if he couldn't do any more good, Stormzy curated #Merky Books in collaboration with publishers Penguin Random House. Each year #Merky will publish two to three books to give a voice to a new generation. The first book on their roster being Rise Up, the story of Stormzy's journey so far.

Nobody is more deserving of a headline spot than Stormzy, at this point the man is a national treasure. This will be his biggest audience to date, so make sure you tune in to BBC Two for what will be a performance to remember from Stormzy.