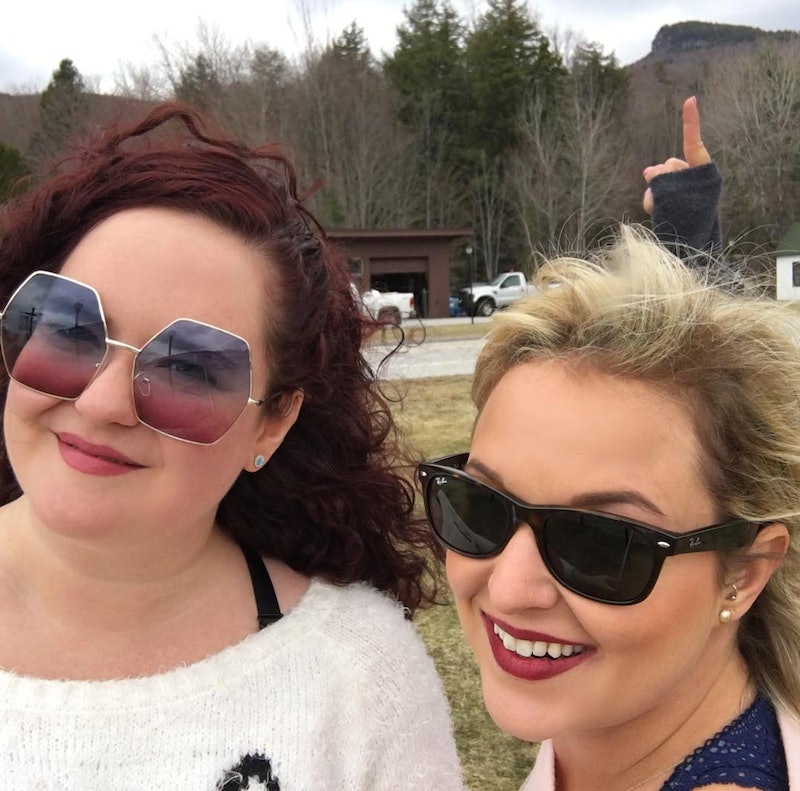 Two years ago, Kelly Chase and Kari DePhillips were lying on Mexico's Playa del Carmen eating fish tacos, watching the sun set, and talking about how great it'd be if life could always be this way. Then it occurred to them: What if it could? What if their lives could be a constant vacation? It was on that beach that the Workationing movement was born.

Kelly and Kari work together at the PR agency The Content Factory, but much more than work binds them. Both lost parents to cancer in their early 20s, and both parents died regretting that they didn't fulfill their dreams of traveling the world. Their daughters couldn't let that happen to them.

Nonstop traveling wasn't unheard of at that point. Digital nomads — people who move from place to place every few days, weeks, or months while working remotely — were becoming the subject of online forums and magazine features. Workationing puts a twist on digital nomadism: Kelly and Kari not only work during their expeditions but also treat them as vacations.

If you want to be a nomad, the first step is to grow a freelance clientele or find a work-from-home job. Kari built a career as a freelance writer in three months before starting The Content Factory, and like all Kari's employees, Kelly worked remotely. But even after they had that, they ran into a bunch of obstacles to location-independence, sometimes logistical but mostly psychological. Both described getting rid of their apartments and possessions as the number-one blockage. But once they entered their charming Aguada, Puerto Rico Airbnb, they realized how simple it really was.

"When we finally did it, it felt like I was doing this huge thing," Kelly tells Bustle. "But at the end of the day, all I did was get on a plane. And then you’re like, 'this is just a thing you can do.'"

Kelly and Kari have gotten themselves into some crazy predicaments in the process of workationing, including renting a Airbnb in Medellin, Colombia only to realize they were smack in the middle of the red light district. But they've also made some important discoveries, like how to make ice when you have no ice cube tray (they call it the "pancake ziplock method") and how to meet "Tinderellas" ("we take them out for a night, and maybe they'll leave a glass slipper"). They document all of these in their Workationing podcast.

This might sound like a lifestyle fit only for the rich and famous, but in fact, Kelly's paying back student loans, and they live on a budget of $40K/year. They also work incredibly hard, sometimes remaining in their rental place for days, which is why they never visit a city for less than a month. But they also save a ton of time commuting and primping for work — 500 hours a year, they've calculated — and they spend those 500 hours wisely.

The friends have a bucket list full of items like jumping off a yacht (while someone hands them champagne, of course) and appearing on The Price Is Right. They're as specific as possible about their goals because they believe that'll increase their chances of attaining them. "Our walls are covered in post-it notes," says Kelly. "We plan out everything, acting from assuming things are going to work out — you just have to put in the work to get there." Some of their podcast listeners have even offered to help them cross off bucket list items.

Kari tells Bustle she considers her lifestyle "inherently feminist." Part of her motivation was to escape sexist workplaces that pressured her to dress up, do her hair, and wear makeup — essentially, to "get ready for a job you’re already ready to do," as she puts it. "You are judged entirely by the quality and timeliness of your work" when you work remotely, she says. "Office politics don’t come into play."

Secondly, she and Kelly have rejected the belief that you have to get married, find a house in the suburbs, and have kids by a certain age. At 34 and 32 (though they both say they're in their "late 27s"), they've embraced the single life.

If this all sounds amazing to you, you can totally do it — and it's just as valuable a use of your time as more traditional paths. "It's not that we're spinsters on a buddy system," Kari explains. "This is a time of life. I'm watching my friends get married and buy houses and double down on staying stagnant, but I do not care about the latest ninja blender or home delivery food service or furniture. I really care about life experiences, cool travel stories, seeing as much stuff as I can before I die. This is for women who aren’t tethered and don’t want to be tethered."