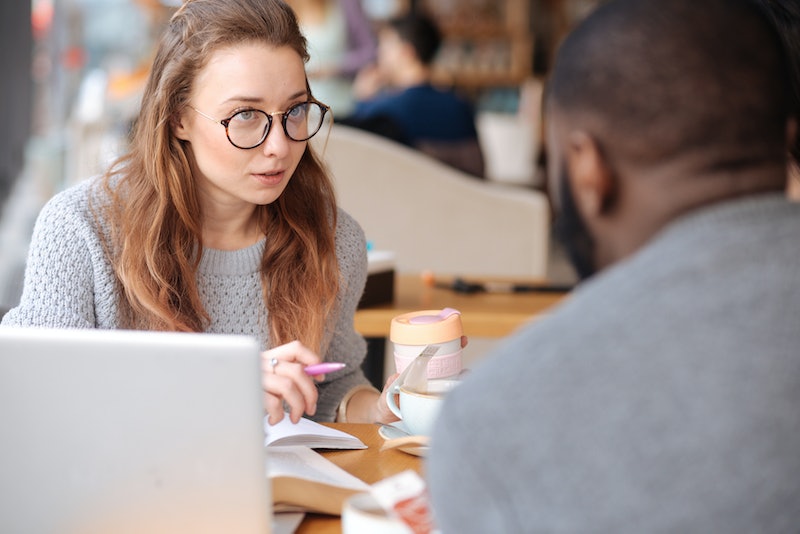 Every day, it seems like there's new research quantifying the belittlement, sexual harassment, and lack of opportunities women face at work. So how many studies on workplace sexism have to come out before people accept that it exists? Apparently, the answer is still "more"— and more are certainly forthcoming.

Exhibit A: A new survey on gender inequality in the advertising industry by Advertising Week and Foresight Factory has found that 23 percent of women and a whopping 44 percent of men think workplace sexism doesn't exist. Men were more likely than women to believe that their offices' maternity leave policies were fair and that companies have adequate plans in place to advance women. So, either a bunch of women are making the problem of workplace sexism up, or men are having trouble observing oppression when they're not the victims on it. I'm going to go with the latter explanation. Occam's razor and all that.

While it's understandable that even well-intentioned people may not be aware of their unconscious biases or the discrimination that exists around them — sexism can be subtle, after all — there's no excuse for believing that gender equality in the workplace has already been achieved, given how much information is out there to the contrary. Here are just a few facts that prove we still have a long way to go in that arena, and denial isn't helping anyone.

One study in the Proceedings of the National Academy of Sciences found that a fictional person with the name "John" was more likely to get hired as a lab manager than someone with the name "Jennifer" and got a higher salary offer. This debunks the argument that women just have different skills or less interest in subjects like STEM. Since the applications were otherwise exactly the same, we know sexism played a role.

2. At Least One Fourth Of Women In Tech Have Experienced Sexual Harassment At Work

A new study by the site Comparably found that 23 percent of women in the tech industry, but only four percent of men, had experienced sexual harassment in the workplace. That number might be a conservative estimate or may not reflect what women experience over the course of their entire careers. Another survey by two female tech industry veterans called Elephant in the Valley , which mostly included women in senior positions at their companies, found that number to be 60 percent.

3. Most Women In Tech Have Been Accused Of Being Too Aggressive

Another finding from Elephant in the Valley: 84 percent of women in mostly senior positions in the tech industry have been accused of being too aggressive by their coworkers. This lends credence to the notion that we disproportionately accuse women of being "shrill" and "bossy" while men are deemed good leaders for possessing the same traits.

4. Almost One In 10 Women Has Been Asked To Wear More Makeup At Work

A survey by the U.K. law firm Slater and Gordon not only produced this troubling statistic but also found that seven percent of women said their bosses have asked them to wear heels. That's something very few men will face over the course of their careers. And here's the irony: According to a survey by the recruiting company Jobvite, 19 percent of recruiters would be deterred by an applicant who wore "too much" makeup. Women just can't win.

5. Women Get Fewer Promotions Than Men

According to McKinsey and Lean In's second annual Women in the Workplace report, 130 men are promoted to management for every 100 women. And it's not just that women are less interested than men in senior positions. In fact, according to Deloitte's Millennial Survey, half of women feel overlooked for leadership positions at their companies. Another survey by the women's career site Fairygodboss found that not getting promoted was women's number one complaint related to workplace sexism. And as all these data show, they're not crazy to be concerned. Our lived experiences should be enough to prove that workplace sexism exists. But if they're not, there is more than enough research out there.

More like this
Black Women's Equal Pay Day Highlights An Upsetting Problem
By Brandi Neal
Women Around The World Are Cutting Their Hair In Solidarity With Mahsa Amini
By Darshita Goyal
How To Politely Reject Someone Who Keeps Asking You Out
By Laken Howard and Lexi Inks
The Spiritual Meaning Of Angel Number 666, Explained
By Brittany Beringer
Get Even More From Bustle — Sign Up For The Newsletter