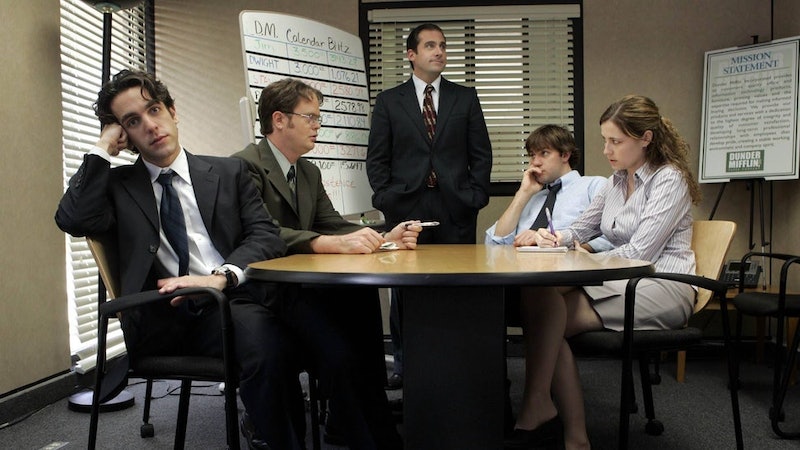 If you're like me, you're on your sixth rewatch of The Office and there's no real end in sight. It's just one of those classics that seems to get funnier and more ridiculous every time. But do you know what goes on in your brain when you keep coming back for more? Though it's easy to pinpoint how you feel when you watch the show, it takes a little more research to learn what happens to your brain when you watch reruns of The Office.

Shows like The Office feel addicting because of the way your brain reacts to watching them. "Our brains respond very well to getting the same things multiple times," Sophie Scott, PhD, professor of Cognitive Neuroscience at University College London, tells Bustle. Because of a phenomenon called the "mere familiarity effect," you might tend to appreciate things that repeat just because they're familiar. Knowing something good is coming can be a source of comfort to you, which helps explain why you re-watch the same thing twice.

Ben Spielberg, M.S., founder and CEO of TMS Brain Health, a Los Angeles brain health center, explains that pleasure also plays a role in why you watch shows like The Office over and over again. "When we engage in positive behaviors that are supposed to feel pleasurable, a neurotransmitter called dopamine is released into the brain," he tells Bustle. "Dopamine release leads to positive mood changes such as happiness and comfort, but dopamine can also lead to perseveration and compulsive behaviors." So when your brain realizes that watching Michael make crass and ridiculous comments is enjoyable, you keep watching to get those positive feelings.

A 2011 study conducted by the University of Chicago offers another possibility. The study suggests that you enjoy rewatching your favorite shows like The Office because every time you watch them again, you understand more about what's happening. If you've already seen an episode, watching it again requires almost no thinking on your part to process the events. And when your brain doesn't have to work as hard, you can sit back and enjoy the show more. So when you're watching the "Stress Relief" episode for the millionth time, for example, it's still funny because your brain isn't putting as much effort into understanding why everyone is running around and panicking. Instead, it already knows what's going on, making it that much easier to appear funny.

While watching The Office, you also get used to things like Jim's boyish charm and Pam's hopeful persona — in fact, you even gain a personal attachment to the characters and set expectations for them. So when they fulfill your expectations, you're pleased. But when they disappoint you, like when Jim is extra harsh with Pam over the phone in the episode "Customer Loyalty," you're not happy (and if you're like me, you cry). According to Spielberg, you can blame something called prediction error. "If a television character acts in a way that positively reinforces our expectation, we are rewarded with increased dopaminergic signals from the nucleus accumbens," he says. "However, the opposite is also true: if a character acts in a way that is disappointing, we will get a decreased dopamine response called a 'negative prediction error.'"

All that aside, why do you care about the on-screen relationship so much to begin with? As Scott explains, "Our brains are built to deal with this kind of social information and to place a lot of emphasis on how other people are behaving and to try to understand why they're doing what they do."

But no disappointment is greater than when your favorite show comes to a close. "Whereas we see increased dopamine released as we view our favorite show on a weekly basis, the end of the show will likely mark a notable decrease in dopamine as the signals stemming from the nucleus accumbens fail to match up with an established pattern," Spielberg says. In fact, Scott explains, you might associate the ending of your favorite shows with loss. And this is exactly why when The Office ends, you just start it right back up again.