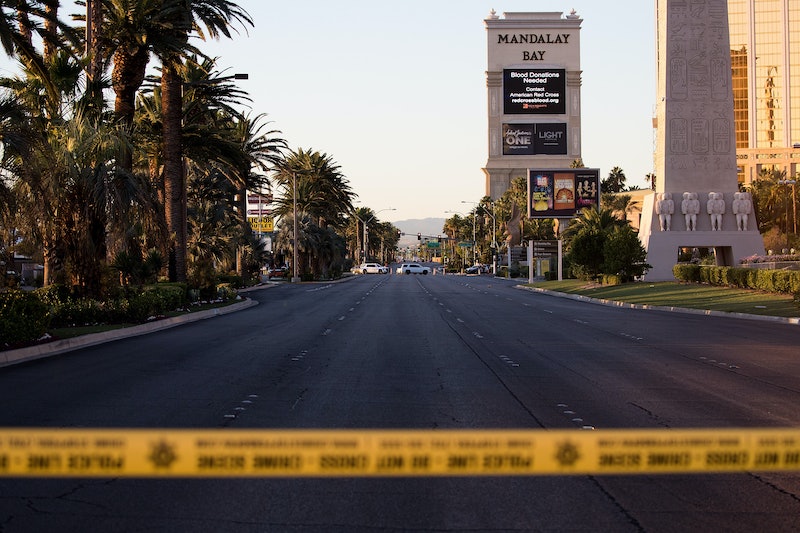 The Las Vegas gunman killed over 50 people and injured 500 more. He positioned himself 32 stories above a concert with 22,000 people, with an arsenal of weapons. He is a murderer. Though the authorities may not be calling him one he is, by any common-sense definition a terrorist. He is a white male. But, unlike countless other killers, terrorists, murderers, his actions will not be taken as representative of his ethnic group. Yet people called him a 'lone wolf'. This is white privilege in action.

Despite the fact that white men have committed more mass shootings than any other group, the language we use to talk about white male shooters presents each one as a surprise, as not representative of the group that they are a part of. It's assumed that a Muslim who commits a crime does it because their religion is inherently violent and a black person who commits a crime does it because they are inherently violent. But a white person commits a crime and it means they were mentally ill or a loner. The 'lone wolf' language was used with the Charleston shooter, the Isla Visa shooter, the Sandy Hook shooter. People don't ask other white men to stand up and denounce them. The white community doesn't become not vilified. Everyone looks away.

This is not new. The Vegas shooter was described as someone who "enjoyed gambling, country music" before he committed the largest mass shooting on U.S. soil. Look at that language. He just killed over 50 people and he's being described as a country music fan? The rhetoric is disturbing. We say 'he enjoyed gambling' like it's an innocent past time, while someone else might be presented as a gambling addict. He was described as someone who "enjoyed a quiet life". Who gives an actual eff what kind of life he lead? He killed over 50 people.

The temerity, the hypocrisy, and the lack of self-awareness that it takes to highlight the seemingly innocuous traits of a mass murderer is dumbfounding. But it's too common. Out culture treats whiteness as though flaws are written off, and mistakes forgiven, because they are not considered to be who you really are. People of color wear those mistakes for life — as individuals and as a community.

Not to mention the role that being white plays in being able to commit some of these crimes in the first place. The man bought 42 guns. 42 guns. Can we just think about that? He carried dozens of them into a hotel room without ever arousing suspicion. Surely this is suspicious behavior — but not for white men. When you're white, people assume your innocence, your good intentions. You evade scrutiny.

And, beyond the language we use to discuss the shooter, the political response to this tragedy will be yet another example of white privilege. Terrorism committed by people who aren't white has been used to justify discriminatory bans and encroachments on personal liberties. But terrorism committed by white people is written off as an anomaly. Gun crime is ignored. Despite the fact that more people are killed by toddlers with guns than are killed by terrorists on U.S. soil, there is no move toward controlling them, no wave of righteous indignation from our politicians. This year alone, there have already been 11,565 gun deaths, leaving 545 children under the age of 11 killed or injured. There have been 273 mass shootings in 2017. But guns, wielded by white men, are not the problem.

I am white and I have benefited from white privilege. I do not know how to yell loudly enough about these injustices. But I can tell you that this man represents white men every bit as much as an Islamic fundamentalist represents other Muslims. If you chose to assign blame to one community, you need to do it to another. And if you don't do it to one, you can't do it to another. White privilege is insidious, and it seeps into every area of life. But looking back at a mass murderer's life and highlighting his love of country music is one of the most sickening ways it can present itself.