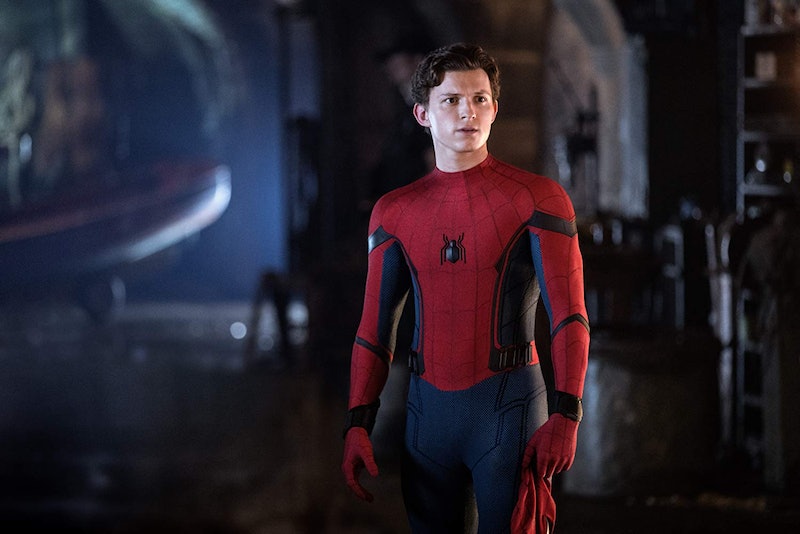 In Spider-Man: Far From Home, it becomes clear that Peter Parker (Tom Holland) is taking over some of Iron Man's (Robert Downey Jr.) superhero duties. He may not be the new CEO of Stark Industries — that's a role only Pepper Potts (Gwyneth Paltrow) could fill — but he's got access to all the world-saving tech Tony Stark developed, special A.I. assistant E.D.I.T.H., and Stark's loyal friend and security guard Happy (Jon Favreau). But recent reports of an impasse between Disney and Sony Pictures have left the future of Spider-Man's narrative in the Marvel Cinematic Universe in jeopardy. What happens to Iron Man if Spider-Man leaves the MCU?

On Tuesday, Deadline reported that, according to anonymous sources, Disney and Sony couldn't reach a new deal for the partnership that allows Spider-Man (for whom Sony owns the rights) to continue to appear in MCU films (Marvel Studios is owned by Disney). Sources also told Deadline that Disney asked Sony to shoulder half of the finances for the future Spider-Man films and possibly of other films in the Spider-Man universe. Sony, reportedly, wouldn't agree to that.

As The Hollywood Reporter indicates, Disney and Sony's unusual partnership left the rights to the Spider-Man franchise in Sony's hands while allowing Peter Parker to appear in the Avengers films and Captain America: Civil War. And if an agreement can't be reached and Marvel Studios President Kevin Feige no longer has a hand in Spider-Man's onscreen journey, that puts a dent in the assumption that Peter would be, in many ways, taking over for Tony Stark in the Avengers.

Sony released a statement Tuesday night saying that reports have "mischaracterized" the talks. Sony seems to put the blame on Feige's duty to many other projects. The statement reads:

"We hope this might change in the future, but understand that the many new responsibilities that Disney has given him — including all their newly added Marvel properties — do not allow time for him to work on IP [intellectual properties] they do not own. Kevin is terrific and we are grateful for his help and guidance and appreciate the path he has helped put us on, which we will continue."

The statement seems to suggest that there might be a chance that Spidey won't be completely divorced from the narrative the MCU provided for Peter Parker. Still, without direct access to the rights to the character, Disney wouldn't be able to even reference Spider-Man in their future MCU films. Paltrow says she's throwing in the towel as Pepper Potts, per CBS, which means that her superhero alter-ego won't be around to fill Tony's shoes either. So does this mean Iron Man's legacy ends here? Not necessarily.

There are a couple of other viable successors who could continue honoring the Stark name, starting with Tony and Pepper's daughter Morgan (Lexi Rabe). She's a little too young to start saving the world just yet, so — unless there's another big time jump — Morgan probably wouldn't don the metal suit for quite a while.

In the comics, we have Ironheart a.k.a. Riri Williams, a young, black, and female iteration of Iron Man. Williams is referenced in Invincible Iron Man Vol. 3 Issue #1, when Tony Stark makes mention of a 15-year-old genius who had reverse engineered his technology. Stark himself vouches for Williams and her dream of becoming a superhero. She later assists Iron Man during the second superhero Civil War, fighting against the forces of Captain Marvel.

However, with Falcon (Anthony Mackie) as the new Captain America, with the Winter Soldier (Sebastian Stan) at his side, there may be no need for another superhero leader just yet. And though it's a sad thought that Tony's story may end with Peter's departure from the MCU, it's a possibility to consider.

But nothing is final final until the details for the next Spider-Man film are officially announced, so here's hoping Disney and Sony will be able to come into an agreement soon.