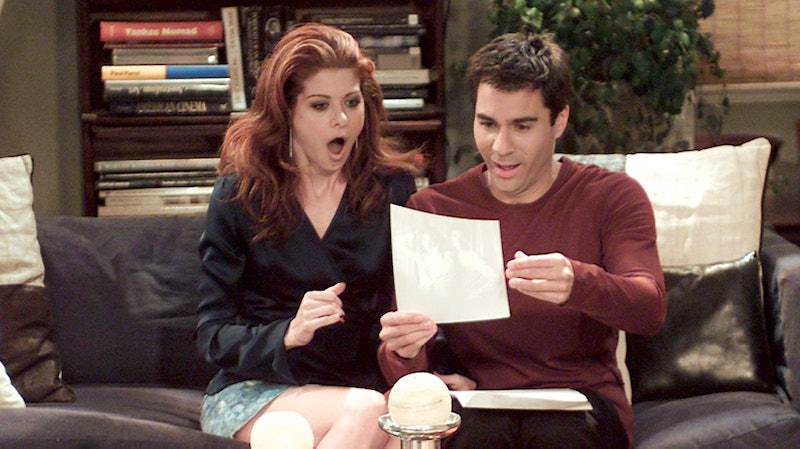 Will and Grace and Karen and Jack will officially be back. It turns out, the Will & Grace revival is really happening. According to NBC, the original cast — Debra Messing, Eric McCormack, Sean Hayes, and Megan Mullally — will reunite for 10 episodes that will let fans catch up with their fave foursome. Adding to the nostalgia factor, series creators Max Mutchnick and David Kohan will be back. They'll be joined by director James Burrows, who, according to Entertainment Weekly, "directed every episode of the show during its initial eight-year run." Speaking of the original, how will Will & Grace's finale affect the reboot?

While NBC announced the series will return in the 2017-2018 season, the network has not revealed much in terms of plot. While fans aren't looking for spoilers, they're certainly interested to know when this upcoming installment takes place. It's a valid question, being that the original series finale gave a glimpse of what Will and Grace were up to, which included a lengthy falling out.

In the two-hour series finale, Will and a very pregnant Grace hit a snag in their relationship after she decides to marry her ex-husband Marvin "Leo" Markus (Harry Connick Jr.). They end up losing touch for years, only to reconcile after they meet up again while moving their respective children — Laila and Ben — into college. (Oh, and Laila and Ben end up getting married, FYI.) So will this new Will & Grace be taking us into the future?

Being that this episode aired in 2006 and Grace's daughter is presumably 18 when the two meet again, the time jump should take place, at the earliest, 2024. If the show is picking up right where it left off, it's not only giving us the future of Will & Grace, but a look at the future, period.

Time jumps aren't new for shows — or for NBC. Parks and Recreation's 2015 final season jumped ahead to 2017. In its series finale, the show continued to play with time by showing the futures of multiple characters, pushing ahead to 2048 when Leslie Knope is possibly America's president. It worked for Parks and Rec, allowing them to make jokes about a future that included a Joe Biden poetry book about Amtrak, the release of Hitch 2: Son Of A Hitch starring Jaden Smith, and the terrifying merger of Verizon, Exxon, and Chipotle.

While not impossible, it certainly feels like it would be a little tougher for Will & Grace to do that kind of time jump, knowing how much of its humor plays off current pop culture. It's why the more likely scenario for Will & Grace is that it will ignore the series finale and pick up in 2017. After all, it's what the show seemed to do with the recent Will & Grace election short that had Will, Grace, Jack, and Karen talking about the 2016 election.

From what the series finale showed, Will and Grace would have been well into their separation at this point. But would the show really want to jump ahead and miss out on all the Donald Trump jokes? Just think of the "Just Jack" performance.

There is, of course, another possibility that I'd like to call the How I Met Your Mother scenario. The series finale ends with all four friends reminiscing about the good ol' times at a bar, sound familiar? What if the show takes place in 2024, but has Will, Grace, Karen, and Jack retelling moments of their past? Those moments that viewers missed, not only because of the time jump, but because they weren't covered in the original series. Wouldn't you want to see what Jack did with Beverley Leslie's fortune all those years ago?

Sure, this is very unlikely, but at this point anything's possible. Heck, yesterday we still lived in a world where a Will & Grace reunion was reportedly not happening. Basically, expect the unexpected when the show returns, but most importantly, expect to laugh.

More like this
Does 'Locke & Key’s Ending Mean There Could Be A Season 4?
By Sophia Moore
Everything To Know About Netflix’s 'Never Have I Ever' Season 4
By Jack Irvin and Gabrielle Bondi
This New TV Show Revisits The Most Controversial True Story From Hurricane Katrina
By Brad Witter
Meet The New Team Of Residents Joining 'Grey's Anatomy' In Season 19
By Brad Witter and Sophia Moore
Get Even More From Bustle — Sign Up For The Newsletter