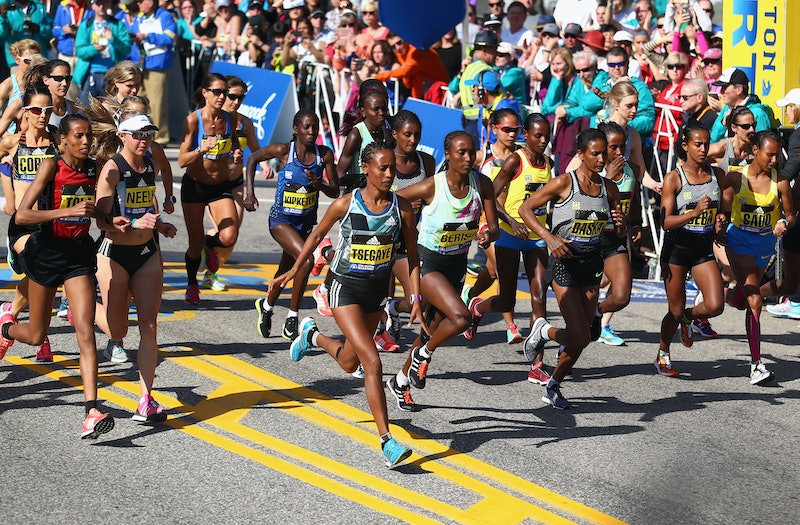 The idea of running a marathon was first proposed to me by a friend and teammate (we played on the club field hockey team together) at a party in college. We had just played our last championship game of the season, and since I was a senior, it meant my collegiate athletic career — if you could even call it that — was over. I was feeling sad about the end of the season and am naturally competitive, so it didn’t take long for me to accept my friend's challenge: I would run my first marathon that April, right before I graduated college.

For me, it was a swift and easy decision, fueled by the intrigue of a challenge and some beer. Since then, I’ve gone on to run an 11 additional marathons — though my consideration process has become a bit more tactful. Unfortunately, making the decision to run a marathon wasn’t always so simple for women. In fact, 50 years ago it wasn't officially recognized, at all.

An estimated 13,700 of female runners will toe the starting line of the 2017 Boston Marathon on Monday, but 50 years ago, the iconic race (and arguably the most popular marathon in the world) was, for the most part, a men-only event. The very first Boston Marathon was held in 1897, but it wasn’t until 75 years later that women were recognized as official entrants and finishers by the Boston Athletic Association. Although there were no real rules stating women weren't allowed to participate, many believed women were physiologically incapable of completing the distance. As ridiculous as it sounds — after all, how many female friends have you seen on your Instagram feed running marathons in the past decade? — at the time, some people believed that running a marathon could cause a woman’s uterus to fall out.

That all changed when a 20-year-old college student named Kathrine Switzer registered for the official race in 1967 as "K.V. Switzer" (masking her gender, whether she intended to or not), and became the first female athlete to run the course with a registered bib.

Though she finished the race and is a known advocate for women’s running today, Switzer’s participation in the 1967 marathon wasn't exactly celebrated by everyone. The race director at the time reportedly even jumped on the course in attempt to stop her from crossing the finish line.

Fortunately, Switzer finished the race regardless of the interference. The now-historic photo of co-race director Jock Semple apparently trying to veer Switzer off the 1967 course sparked major publicity for the topic of women’s access to sports.

Today, so much has changed for women’s running in general, and many credit this ignition back to Switzer’s actions. By 1972, women were “officially” allowed to register for the Boston Marathon (though the nine women who met the strict men’s qualifying times were required to run separately from the men). Switzer herself went on to run 39 marathons (winning New York City in 1974), and become an advocate for women’s running, helping to secure the women’s marathon as an Olympic event.

Fortunately, the progress has continued. According to Running USA’s 2016 State of the Sport report, females accounted for 9.7 million road race finishers nationwide last year, and represented 57 percent of race event fields. As for the Boston Marathon itself, 2016 race statistics show that the once male-dominated race field is leveling out, too: nearly half of 2016 finishers (approximately 46 percent) were female.

Women aren’t just running marathons anymore, either. Women are running ultra distances to defy limits, ignite change, and to empower one another. In March, Alison Mariella Désir rallied a team of four core runners to run from Harlem to Washington D.C. to protest the presidential election and raise money for Planned Parenthood. Also in March, women’s athletic apparel company Oiselle sponsored the first all-female team for the Speed Project 3.0, a relay race involving teams of six runners covering 340 miles from Los Angeles to Las Vegas over a two day period. (Before 2017, this unsupported race had only been attempted by either all male or coed teams.) Organizations like Girls on the Run and Switzer’s own 261 Fearless use running as a vehicle to empower and unite women globally on a daily basis.

The sport's ability to bring people of all abilities, backgrounds, and cultures together is pretty incredible. As Marnie Kunz, a beginner’s running coach based in Brooklyn and founder of Runstreet, told me earlier this year: “When we’re running, we’re all equal.”

On April 17, 2017, 50 years after her historic run, Switzer will run the Boston Marathon once more at the age of 70 with her original bib number 261 to pay homage to the streets of the city where women’s running was redefined and changed, forever.

Even if you're not a runner yourself, I hope you'll join me in celebrating the strides we as women have made — both on the race course, and off.