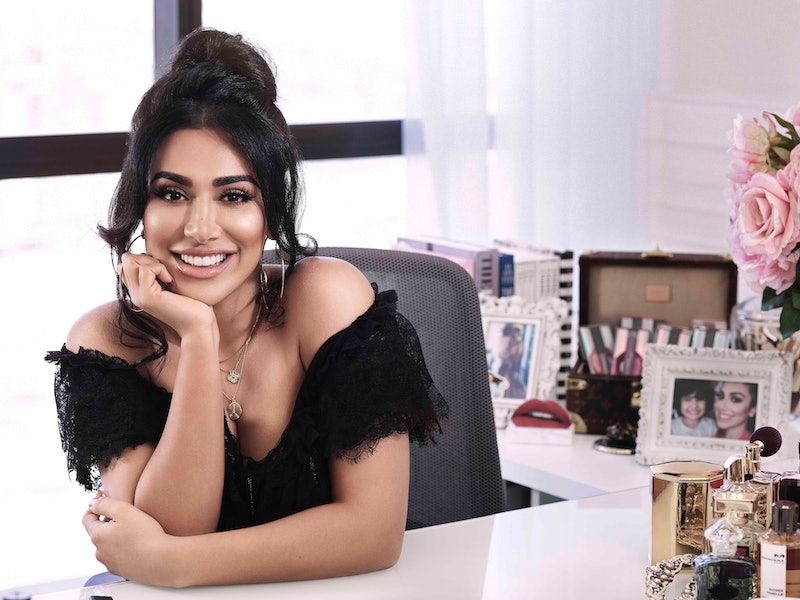 In Bustle’s Q&A series 28, successful women describe exactly what their lives looked like when they were 28 — what they wore, where they worked, what stressed them out most, and what, if anything, they would do differently. Huda Beauty founder, Huda Kattan explain why she hasn't 'made it' yet and what it was like being a new mom at 28 while launching a global beauty brand.

You've likely seen Huda Beauty on the shelves of your local Sephora. From the brand's well-known lashes and liquid lipsticks to more recent creations like a line of inclusive foundations and the popular reformulated Rose Gold palette, Huda Beauty has been turning out hits since 2013. However, at 28 years old, Huda Beauty founder Huda Kattan wasn't the beauty mogul she is now.

At 28, Kattan had just had her daughter Nour, and her blog, Huda Beauty, which now also houses her brand's sales platform, had just begun to take off. The brand founder says that 28 was a difficult time in her life, but ultimately, she considers the year, and her twenties as a whole, to be what she calls a "building" time. For her, this means a time to learn who you are and what you want from life.

Bustle spoke with Kattan about her life at age 28 — what her goals were, how they've changed, what she'd do on Friday nights, and some of her memorable splurges.

Take us back to when you were 28. Can you describe exactly how you were feeling? Where were you on your 28 birthday?

Oof. I was in a bad place. I had just had Nour. She probably was about four months old at the time and severely colic, and I was trying to blog. I was just getting ready to launch [Huda Beauty]. I was vlogging and breastfeeding, and my blog was just starting to take off, too. People were asking me to travel, and I just wasn’t ready to leave. It was just the worst time in my life. I remember holding [Nour] onto my boob and working and falling asleep all the time. It was so bad. It was the worst time.

My 28th birthday was not a good one. It was really rough...Your 20s are just confusing with a lot of identity crisis so it’s very hard. There's a lot of personal growth, but it sets you up for your 30s, so it’s all amazing.

There’s always going to be a limit on how big we dream, but who put that limit there? Why do we think we can’t be as big as we want to be? Get rid of that limit.

What did you think was your biggest obstacle when you were 28?

I was becoming a new mom, and I was just trying to discover who I was as a mom. I think, traditionally, I learned that you could either be a mom or a career woman. I was trying to be both at the same time... I didn’t really have any role models to look to. It was only my mom. I didn’t know if I was going to be able to do it. It was a real struggle.

What would your 28-year-old self say about what you’re doing right now?

[What I am doing now] would have been my goal at 28. Michelle Phan, at the time, was my idol. She was the idol. It was between her and Arianna Huffington. I idolized [Huffington], but as an influencer, Michelle Phan was as big as it got. So, I actually remember writing in my diary one day "Imagine if you could be as big as them" and I was like "Huda, stop being stupid." I literally wrote that. Then, I thought maybe my goal should just be being the biggest blogger in the Middle East. It's just so funny when I remember thinking that at 28... You never know where you’re going to go.

My life pretty much revolved around my daughter and my blog. I remember at the time, before I had my daughter, I used to go out. I used to have friends and go out all the time, and I'd be at events all the time. But when I had my daughter, I committed to being a mom. When I made that decision [to have a career and be a full time mom], I thought, "Well, something has to go." I decided I was going to start sacrificing a little bit more of my social life, and it was a little bit challenging because at 28, you’re still kind of young to do that. I feel like you plan to do that when you’re 40, but I just knew I wanted to be a good mom and also successful in my career, so I stopped going out.

I felt like I really wanted to be there for my daughter. I wanted to see everything. I didn’t want to hand her off to somebody. Since I wasn’t sure if I could be successful as a mom and a business person, I went full throttle on both. It took a toll on my personal life. My Friday nights were being home with Nour, my family, and watching movies or whatever. It was like really low key.

Where did you live? Describe what your house or apartment looked like.

Life was pretty hectic at the time! My husband Chris and I were living in an apartment on the Palm in Dubai in a complex called the Golden Mile. It was where we were living before we expected Nour, so we had to do the best with the space when she was born. It wasn’t a massive apartment, but we made it work at the time. It’s honestly where I spent most of my time as I was constantly taking care of Nour while trying to put in hours on my blog!

At the time, I was really getting into my blog, so I was splurging on a ton of different beauty products and random ingredients for any hacks I was trying to pull off. This was really before influencers and bloggers were gifted a ton of products, so you can imagine how much of my money was spent at Sephora!

I wish that I wasn’t so hard on myself and loved myself a little more.

Describe your favorite outfit and beauty look from when you were 28. Anything in your wardrobe or makeup bag that immediately brings you back to that time?

When I was 28, it was 2012 and ombre hair was the biggest hair trend at that time. I have to admit, I definitely bought into it, and I went full on ombre. By early 2013, I was so over it and went back to my more natural, dark brown tone. Too many people started to do ombre, and it was just overdone.

It’s hard to remember what makeup products were my go-to because I was constantly trying out new products for the blog. I do remember loving BB cream, especially since I was living in Dubai in the intense heat. I felt like I was somewhat treating my skin when using it while also giving my skin a super clean and even finish. The lightweight nature of BB cream was exactly what I needed during the hotter months.

Back then, I had also really just discovered Bioderma Sensibio H2O Micelle Solution and fell in love. So many makeup artists were using it during London Fashion Week at that time, and I was like, "Ok, I have to try this." I was immediately obsessed with it since it’s such an amazing makeup remover and cleanser especially for sensitive skin. My skin is super sensitive which is why I was ready to try it.

What was one moment in your career when you knew you had made it?

I feel like "making it" is a facade because everyone decides what success is differently. When I see people operating at a flow, and they’re doing something just so flawlessly and it comes naturally, that’s when you’ve made it. I’m not completely there. I’m still discovering who I am as an entrepreneur, as a business woman, as an influencer, as a person, as a personality. Where I sit right now, there hasn’t really been someone before me because usually you do one or the other. I’m not completely in my flow. I’m getting there.

Everyone defines success differently. I personally won’t feel successful until I feel satisfied, and I am not completely satisfied with how much time I spend with my family and all those things.

Seeing a lot of celebrities you love, like Jennifer Lopez putting a photo up of doing her daughter’s makeup on her Instagram and she has our palette in the photo, that’s an amazing moment. Having our investors believe in us — that was amazing. I feel like I’ve had several moments sprinkled around, but I try not to get sidetracked by it. Stay focused, but they are nice moments.

What's the one piece of advice you wish you could go back and tell your 28-year-old self? Is there anything you'd tell her to do differently?

I wish that I wasn’t so hard on myself and loved myself a little more. My 20s were definitely not my easiest time, and I know that I am my own worst critic to begin with, so that definitely fed into it. Self-love is a journey that most people go down later in life, and that’s certainly been the case for me. I didn’t really start appreciating who I was, what I stood for, and how big of an impact I could make on the beauty industry until my 30s.

I had a pretty rough childhood growing up as an Arab American in the U.S. A lot of the criticism and bullying I experienced then stuck with me. I was always so concerned about what people thought of me or how they viewed me that I was constantly letting their thoughts and opinions get in the way of what I was capable of achieving. I think recognizing this, overcoming it, and really loving yourself for who you are comes with age and maturity. But I wish I could have told my younger self not to let others get in the way or block you from reaching your full potential.

What’s your biggest goal now? How has that changed since when you were 28?

I definitely did not dream as big [at 28]. I don’t think I had goals that were as big as they are now. Even now sometimes, I look at companies like Amazon and Jeff Bezos and what he’s achieved, and I want to dream that big. Sometimes I do, but sometimes I still hold myself back. My biggest goal when I was 28 was just to be the biggest regional blogger, and it’s so weird because now I want to be the biggest force in the beauty industry.

I love beauty. I’m going to go play with makeup for the sake of playing with makeup. Not for product inspiration, not to take video — I just want to play.