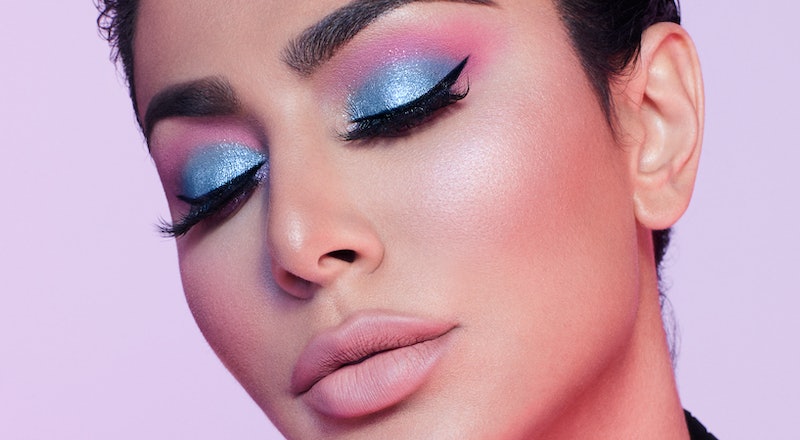 When most people hear that Mercury Retrograde is coming, they cringe. From your phone going on the fritz to miscommunication in your relationships, the period of time gets a bad rep. But Huda Beauty's new Mercury Retrograde palette is providing a different perspective on this trying time (that may not be so trying after all).

For those who may not be familiar, Mercury Retrograde is the time when the planet Mercury slows and appears to be moving backward. While this is just an optical illusion, Mercury's slow down means major issues for on Earth. According to practicers of astrology, Mercury is the planet that rules communication, and when it's out of wack, miscommunication, tech issues, and scheduling complications can abound. But Huda Beauty's Mercury Retrograde palette takes this time period and encourages users to be bold with color and experiment with their styles.

Huda Beauty's Mercury Retrograde is a departure from the brand's Rose Gold and Desert Dusk palettes which feature deep, warm tones. Mercury Retrograde sets itself apart thanks to its collection of blues, teals, purples, and pinks that give it a certain cosmic vibe — which is fitting given its name.

The palette isn't all about the stars, though. I spoke with Huda Beauty founder Huda Kattan who explained that the shadows were actually inspired by her love of crystal AB, a type of crystal that has an iridescent coating. The Mercury Retrograde aspect of the palette came instead from Kattan's time creating it. According to the brand owner, the collection of eyeshadows was difficult to create, and it turned out that during the process of formulating and building the palette, she and her team were, in fact, experiencing Mercury Retrograde.

Astrologer Patrice Kamins tells me that while Mercury retrograde often gets a bad reputation, the next one (Oct. 31 - Nov. 20, 2019) falls under Scorpio, and unlike the previous retrogrades of the year, this could make the time period more intense — but not in a negative way.

"Mercury in Scorpio is actually quite intense but in a positive way," Kamins shares. "We’re talking about feminine issues, we’re talking about accessing your deeper feminine side. Scorpio is about transformation, so it can be about any variety of transformation, including visual appearance, your inner self, your style. It’s a lot about renewal and accessing parts of ourselves that we may not have really paid attention to. It’s an ability to sort of showcase that a little bit more."

Kamins is also clear that during the retrograde, you can embrace all parts of your personality. "We're not just a sun sign," she jokes as she explains how your different rising signs can impact who you are and how you express yourself. With this occurrence of Mercury retrograde, Kamins says, "there are parts of your personality that you might want to reveal or play with during the retrograde. You don't have to commit to that. The retrograde is a relatively small period. See if it works. It's really great to wear a color that you normally wouldn't gravitate towards."

With Kamins' advice in mind and Kattan's latest palette — which launches Oct. 24 — in hand, I decided to embrace the retrograde and created three different looks using the palette keeping my sign (Virgo, by the way), beauty philosophies, and more daring side in mind.

While your eyes may be drawn to the glittering blues and purples of the Mercury Retrograde palette, that doesn't mean it can't be used for your everyday looks. The astrologer explained that the zodiac signs are naturally attracted to different colors. For Scorpio, that happens to be reds.

Since Mercury Retrograde is happening in Scorpio this year, for my daytime look, I chose to go ultra-natural but paired the shadows with a red lip. I started by using Momentum as my transition and then added Crash to deepen my crease. I applied mascara and my red lip and felt good to go.

Confession: I've never worn blue eyeshadow before, but I decided to change that based on Kamins advice for the retrograde. In our conversation, she explains that this time period is tied closely to the idea of the soulmate. However, she explained that the soulmate doesn't have to be another person, it can be yourself. To access your inner soulmate, Kamins recommends embracing instinct, grabbing the color you're most drawn to in order to switch up your style. Personally, I've always been drawn to blue shades, so I decided to go for it.

For this look, I simply transitioned my daytime makeup into an evening-appropriate design. In my inner corners, I added shade Haze for a pop of blue (a la Kylie Jenner). Along my lash line, I took Vortex and added a soft winged line. Immediately, using Mercury Retrograde, I was able to take a daytime look to nighttime and embrace something new.

Finally, I amped things up and went full glam using the palette. For this look, I thought back to my conversation with Kamins and how she explained that since Mercury is in Scorpio, this particular retrograde is uniquely connected to the feminine and female power. While it may be cliché, when I think of the feminine, the color pink comes to mind — it doesn't hurt that it's also one of my favorite hues.

To create this halo eye, I began with Momentum as my transition shade all across my crease. Then, I picked up a mix of Libra and Off Balance to create a deepened pink shade and blended the color into the outer and inner corners of my eyes. Next, I used a clean blending brush to connect the corners just slightly at the top of my crease.

To create the halo effect, I used a concealer as a base in the center of my eye and applied Supernova. To give the shade an extra bit of holographic shine, I topped Supernova with Supermoon. After completing the rest of my makeup, I went back into the palette and used Libra and Off Balance to smoke out the bottom lash line.

Honestly, I'm pretty proud of my work, and while this makeup is certainly for a special occasion (in my opinion), like Kamins said, embracing my inner feminine was empowering.

If you've been concerned about the upcoming retrograde, don't be. This transformative time can allow you to reconnect with yourself and your bolder side — especially when it comes to beauty.