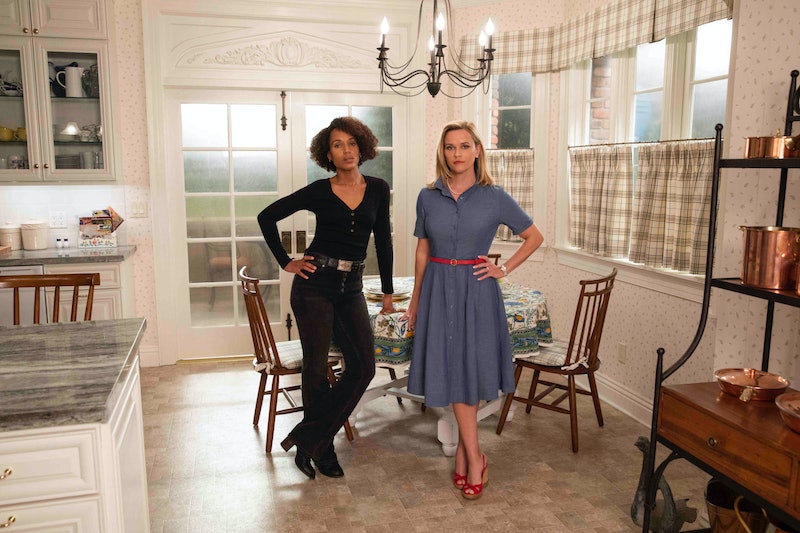 Where there's smoke, there's fire and where there's fire, there's some of the biggest names in Hollywood. The first trailer for Hulu's Little Fires Everywhere, the small screen adaptation of Celeste Ng's bestselling novel kicks off with a house burning to the ground, and things only get more incendiary from there as Reese Witherspoon and Kerry Washington face off as suburban mothers from very different worlds.

Little Fires Everywhere centers on two families — the upper middle class Richardsons and the transient, less affluent Warrens — whose lives become entwined after Elena (Witherspoon) decided to rent out one of her properties to Mia (Washington). However, when Mia's daughter, Pearl (Lexi Underwood) gets close to the Richardson family, a dark secret threatens to be unveiled, and the two mothers fight to protect themselves and their children. On top of everything, Elena and Mia find themselves on opposite sides of a custody battle that is tearing the town apart, and forcing them both to address some of the ugly truths about their lives.

"A good mother makes good choices," Witherspoon's Elena — who appears to be a mix of Madeline McKenzie and Tracey Flick — condescendingly tells Mia at one point, before the artist fires back, "You didn't make good choices. You had good choices." There might be a literal fire at the center of the series, but the real heat seems to be coming from the conflict between Elena and Mia.

Witherspoon has played a major role in Little Fires Everywhere, both onscreen and off ever since she first selected the novel as one of her Book Club picks back in September 2018. "I’m so excited to tell you that Kerry Washington and I will be bringing Little Fires Everywhere to the screen together!" the actor wrote on Twitter in March 2018, after she and Washington agreed to co-produce and star in the adaptation. "I love this beautiful book about motherhood and I can’t wait to finally collaborate with one of my favorite actresses." (Ng will also serve as an executive producer on the series.)

Since launching her production companies, Pacific Standard and Hello Sunshine, Witherspoon has worked to combine her passion for reading and filmmaking to bring a great deal of female-centric stories to the big and small screen. In June 2017, she told The Hollywood Reporter that she was inspired to start producing projects about reading "maybe the worst script I've ever read in my entire life," which featured two female roles that were insultingly bad.

"I called my agents and said, 'This is such a terrible script,'" Witherspoon recalled. "They said, 'Well, seven women want it so … you're the only one who's not vying for the part.' And I thought, 'God, if this is what we've come to, I have to get busy.' Because you can either complain about a problem or you can be part of the solution."

In response, the Oscar winner became determined to champion stories that showed a wider spectrum of the female experience. "We have the opportunity to show the entire spectrum of human emotion that women have," Witherspoon explained. "We aren't just the wives and the girlfriends. We are actually living, breathing people who have insecurities."

More like this
Harry Lawtey Is Weighing Up The Price Of Success
By Olivia-Anne Cleary
Nazanin Boniadi Was A Healer Long Before 'The Rings Of Power'
By Olivia-Anne Cleary
Paul Mescal, Man Of Mystery
By Samantha Leach and Heather Hazzan
Olivia Wilde Addresses *Those* Florence Pugh & Shia LaBeouf Rumours
By El Hunt and Sam Ramsden
Get Even More From Bustle — Sign Up For The Newsletter