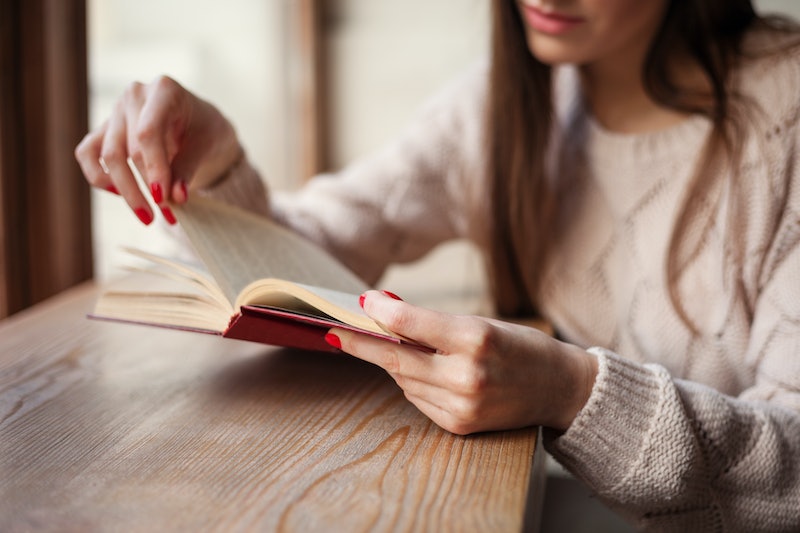 I discovered the book during the second winter of a very long year. It began with the sudden death of a childhood friend and ended the following winter when my boyfriend’s mom, Susan, died unexpectedly at 58. I was young and still learning how to be a partner in an adult relationship, so being a partner in a time of unforeseen trauma was something I wasn’t prepared for at all — until I found Joan Didion.

Here’s how I remember it: I was out running errands when I decided to scroll through the Goodreads app on my phone, finally arriving at a list called "Popular Death and Dying Books." Without looking down, I clicked to preview the third or fourth book on the list, catching the opening lines of what I would soon learn was Didion’s The Year of Magical Thinking:

Life changes in the instant.

You sit down to dinner and life as you know it ends.

The question of self-pity.”

At the time of writing Magical Thinking, Didion was in her mid-60s. Her husband, John Gregory Dunne, had died suddenly and her daughter Quintana, was in the throes of a serious illness. (Quintana would die a few years later, at age 39, a tragedy which inspired Didion to write another memoir called Blue Nights.) Didion's grief story is about rebuilding an identity in the absence of someone who helped build and shape your universe, about losing that person abruptly, at a time when things seemed fine, normal, even great — when husband and wife were content as intellectual partners as well as casual conversers. Didion, who had always been extremely close with her husband, was comfortable with Dunne, not just as his wife, but as his collaborator, his editor, his colleague, and friend.

'The Year Of Magical Thinking' by Joan Didion

My boyfriend’s mother also died abruptly, when things seemed normal and his relationship with her was becoming more comfortable and less parental. Susan was planning to retire in a couple of years, to take more time to travel. Just months earlier, my boyfriend and I bobbed our heads to Fleetwood Mac with her in the kitchen as she fed the dogs. A few days later, she texted me that the group’s late '80s jam "Big Love" was her "new favorite." Less than a year before, she partied with us in DC for what would be our last New Year’s Eve together. She was becoming something new to my boyfriend and he was becoming something new to her. I saw the change unfold; and then, in an instant, I watched his whole world implode. As Didion writes, "life changes fast." But even as a 24-year-old support system for my boyfriend, not much older than myself, I was beginning to understand that the change wasn’t only fast, but brutal. In Magical Thinking, Didion casts a raw, no-resolutions story of a life on fire, a family gutted. It is raw and earnest, and was, for a time, the best book I’d found for processing my boyfriend’s grief, for learning how to empathically react to his magical thinking, until now.

In All That You Leave Behind, Erin Lee Carr, a documentary filmmaker, recalls the sudden death of her father, the journalist and author David Carr. She tells her own coming of age story, too, and details everything from bad boyfriends to addiction to career fumbles — all aspects of her journey, from the ugly to the redeeming, are inextricably linked to an unusually brilliant gene pool, albeit one with a history of addiction. As she writes, "No one gets to choose the traits they inherit form their parents." It’s true.

I was beginning to understand that the change wasn’t only fast, but brutal.

As a writer, the younger Carr is no Didion. And that’s OK. What’s compelling about Carr is her adeptness in using her dad’s words — his emails, texts, letters, commencement speeches, and simple idioms — along with her own to crack open a trove of self-reflection. Carr does not mourn her father’s loss like a poet or proselytizer, but as the exact person she was during that terrible winter of 2015 — a carousing, confused 20-something with little answers and an arsenal of faux confidence. She is a mourner I know and recognize: One who has unfinished business.

Towards the end of her book, Carr writes: "I was concerned by his appearance, the cigarette breaks he took . . . and now I’m haunted by my inability to say, just once, 'Those will kill you. Please stop.' I could never say anything like that to him. He didn’t allow for it." I watched my boyfriend battle similar feelings when his mom died. He wondered why he hadn’t spoken up or hadn’t inquired about the most recent doctor’s appointment. He still thinks that way sometimes. But I know it’s not his fault.

'All That You Leave Behind' by Erin Lee Carr

The Carrs’ is a parent-child relationship that could only believably exist today, one in which secrets are shared, addiction is not ignored, flare emails are exchanged and answered, the f-word is gingerly tossed about, and friendship is key. They are like Lorelai and Rory Gilmore if Rory made a documentary for Vice and if Lorelai, instead of packing an endless toy bag of quips about coffee, was chock-full of gorgeous observations, like this one from an Oct. 1, 1990 entry of David Carr's diary:

“Both girls insist on a bath when we get upstairs, bolting naked as soon as their clothes are removed. Long peals of laughter trail behind them like vapor, hovering even as the bare footfalls fade.”

Erin Lee Carr’s relationship with her father is the kind not everyone can achieve with a parent. I believe, if given more time, my boyfriend and his mom would have achieved it. But when it comes to my own life and relationship with my mother, it’s hard for me to relate. Ours is not the adult relationship I hoped it would be, and though our connection is built on love, it is often characterized by jealousy, resentment, and distrust. The year my boyfriend’s mom died was one of constant mournings, comprehensions, and questions — for everyone. But for me, it was also a year of managing my overwhelming sense of guilt as I tried to imagine something I couldn’t.

My 2015 started on New Year’s Eve when I, along with my boyfriend, received a visit from his parents at the oyster bar where we both worked. That summer, we moved into our first apartment together, and in October, we hosted a housewarming party and invited both our families. Susan was having some trouble walking, but no one would have known. She taught me how to arrange the wildflowers I had bought and helped me plate the fancy meats and cheeses. The next month — just weeks before she died — she hosted a perfect Thanksgiving dinner, at which I caught my boyfriend bragging to her about his newfound chess skills and telling her that he was thinking of going back to school. Unfinished business.

But for me, it was also a year of managing my overwhelming sense of guilt as I tried to imagine something I couldn’t.

Like David Carr, Susan was a monumental presence in and outside her community. She was not a New York Times columnist, but a beloved teacher. Her memorial service was attended by hundreds of people, including students she taught two decades ago. My boyfriend and his mom were not like David and Erin Lee Carr, but they were almost identical to each other: both natural-born teachers; both hot-headed Italians; both extremely passionate, strong, and curious; both big readers and even bigger storytellers.

Carr’s book helped me understand that in losing his mother, my boyfriend also lost his mirror. Being a partner in this moment meant being present as he grappled with the realization that the very wellspring of his identity had been extinguished. A few months after she died, he began to tell me "I’m just like her," an admission which was as much an expression of pride as an articulation of self-crisis. For years, I wasn’t sure how to respond. We only really talked about it when there was an event or holiday or on mornings after he had a dream about her.

I was afraid to poke at his wounds, especially since he was already helping to mend those of his dad, brothers, sisters, and cousins. I was afraid to ask questions, not simply because I wasn’t sure how to approach his grief, but also because I didn’t understand the boundlessness and potential his relationship with his mother held. I don’t have that kind of relationship with my mother, so I couldn’t fully understand what he had lost. But in reading Carr’s book, I came closer to understanding a relationship I thought I could never comprehend.

After her father's death, Carr wrote a list of questions in a Google Doc, which she called the "Sad Girls’ Guide." The list is meant to help other young women who have lost a parent comfortably talk about their grief. My boyfriend is not a sad girl, but I decided to ask him the questions anyway: What was absolutely not helpful to you? Did writing help? How do you cope (without using wine)? At first, he responded mostly with non-answers. His own form of magical thinking, I realized, is less magical and more methodical.

I was afraid to ask questions, not simply because I wasn’t sure how to approach his grief, but I also didn’t understand the boundlessness and potential his relationship with his mother held.

I kept asking, because I felt like this was what’s Carr would want me to do — to keep crowdsourcing, to let grief be grief. He remained slightly removed, but his answer to the final question surprised me.

"How do you communicate about it with people that you do not know?" I asked

He said, "I communicate it with people differently. Sometimes I describe it in very calculated, medical terms, exactly what happened. Other times I just talk about who she was — a teacher, an insanely good mother, and someone with a permanent smile on her face. I let stories about her or stories about her friends tell the story of who she was. In those cases, I don’t really divulge too much with regards to how she died because in those moments it doesn’t matter."

I could tell he had been thinking about this one. About how to keep her whole existence — not just her memory — alive. I realized that Carr is similar, spending only a fraction of a chapter, at most, dealing with the details of her father’s death. Didion, on the other hand, feels burdened by the constant recollection of what exactly happened when her husband collapsed at the dining room table.

For nearly four years, I felt guilty that I couldn’t relate to his loss. I didn’t have a David Carr-like parent in my own life. But I did have Joan and Erin. I had their two memoirs, alive with their broken binds, beating like human hearts. They didn’t change my own life, they didn’t make my relationship with my own mom any better, but they did help me see something I previously could not see. They helped me think differently, think magically.