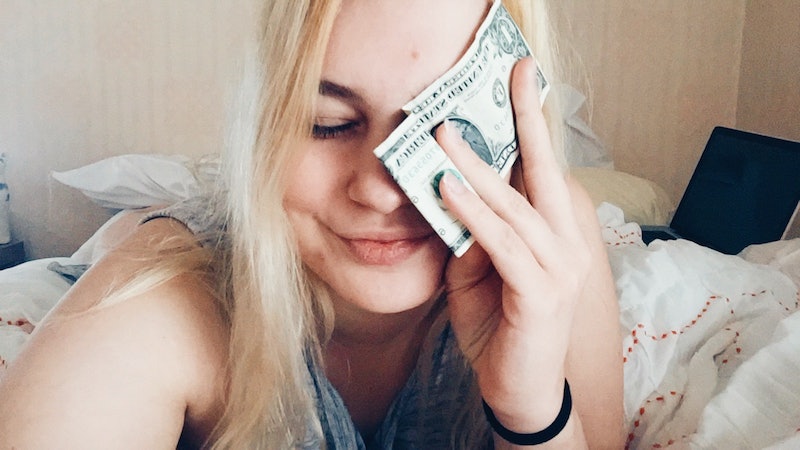 Money is a feminist issue — and yet, women are still reluctant to talk about it. According to a recent Bustle survey of more than 1,000 Millennial women, more than 50 percent of people said they never discuss personal finances with friends, even though 28 percent reported feeling stressed out about money every single day. Bustle's Get Money series gets real about what Millennial women are doing with their money, and why — because managing your finances should feel empowering, not intimidating. Today's topic: what it's like going a week without money.

I'm terrible with money. I've maxed out credit cards, bought things I never used, and even lived off pancakes for three weeks so I could use my grocery allowance to buy concert tickets. If I don't feel like cooking, I immediately order takeout. If I'm out and decide that I really want a smoothie, I go buy one. I spend money on impulse, which is why I decided to go an entire week without giving into my financial urges.

I don't have a budget or a savings account (again, I'm bad at money), so I went into this experiment trying to figure out how much I can afford to save in future weeks. "Save as much as you possibly can, be it 10 percent or 40 percent," Nicole White, editor of Millennial-centric personal finance site, Sapling, tells Bustle. "There's no magic percentage. The right number is the most you can."

Before the week began, I did some much-needed preparation. In order to combat hunger, I went grocery shopping the day before starting this experiment so that I wouldn't convince myself that I'm starving and need to quit halfway through the week to order a pizza. I also made sure the Internet and electric bills were paid off for the month before I began.

My main rule for this week was that I couldn't spend any money of any kind. This includes credit cards that I wouldn't have to pay off until later, gift cards, or money my friends offered to loan me as long as I pay it back at the end of the week. My bank account was officially on lock down. Here's how I coped without spending a single penny for an entire week:

The first day started off OK. I knew that since I went grocery shopping already I wouldn't starve and I had no obligations that would make me leave the house and face any opportunities to succumb to my capitalist cravings. But that didn't stop me from being on edge all day.

The concept of not being able to buy something kept freaking me out and I noticed myself blowing things way out of proportion. Like, I started the crave pizza, and then all of a sudden pizza was the only thing I could think about and it was driving me insane that I couldn't just order a pizza. Day one me really just needed to chill out.

I was also afraid that all of my friends would hang out without me but luckily no one else wanted to spend money either and we spent our Friday night in my living room cash-free.

The second day started with one of my friends asking me if I wanted to head downtown with her and a few of our other friends that night. Obviously I had to decline. Watching Snapchat videos of all my friends having fun without me gave me major FOMO, and I spent the night feeling sad and lonely.

I was also asked to go to a free sporting event that afternoon, but I said no with the explanation that I didn't want to be tempted to buy food while I was there. TBH, I just didn't feel like going because I'm not a huge sports person.

While I was still craving pizza, I was beginning to see the bright side of not spending money. My friends invited me to a show on campus, but even the $3 admission fee was too much for me.

But when everyone left for the night, my remaining roommate and I baked cookies, had a heartfelt discussion in the kitchen, and then went our separate ways to watch Netflix in our own rooms. I was originally worried about being left out, but I realized that just because I'm having a different experience than my friends doesn't mean my experience isn't just as fulfilling.

I really hit my stride on day four. I only had to go to one class, so I didn't even think about buying food on campus when I could eat at home. I spent the day by myself and enjoyed it so much that when some of my friends invited me to a free concert that night, I declined so I could stay in and watch The Bachelor.

I started really feeling the itch of needing to buy things on day five. One of my roommates bought pizza bagels on her way home from class and made them for lunch, fueling my ongoing craving for pizza. Then another friend Snapchatted me while she was eating at a favorite restaurant of ours that was closing down the next day. It also took all of my willpower to not buy a snack before my last class. But I persevered.

When I went to make dinner, I realized I had bagels, tomato sauce, and shredded mozzarella cheese. So I made a pizza bagel and finally cured my incessant craving. I finished this day feeling like a champ.

I was dying in my 9:30 class without my usual trip to Starbucks. Once I finally woke up, I went through most of the day seamlessly without money. That is until all of my friends decided to do a late-night snack run and one of them even offered to get me something. Since promising to pay someone back after the experiment is against the rules, I sadly declined and went to bed feeling just a little bit hangry.

I didn't even realize this was my last day of the experiment until it was halfway over. Someone asked me how this experiment went and I said, "It was amazing. I never need to spend money again!" While I knew that wasn't true because I need to eat and pay bills, I also realized I don't need to spend as much money as I normally do.

Going into this week, I expected to learn a lot about my relationship with money. But I actually learned more about the role money plays in my relationships. I expected most of my issues this week to revolve around food, but I found that I spend a lot more on maintaining my friendships. My cash-free week shined a light on the fact that sometimes I spend money on things with friends that I'm actually not all that into. It became much easier to say no when something being too expensive was my excuse instead of "Thanks, but I'd rather watch The Bachelor. Sorry!"

I still buy food when I crave something specific, but I've become more conscious about what I spend my money on. If my friends are interested in doing something that I'm not, I know that missing out isn't the worst thing in the world. It's easy to say yes to things when your bank account is full, but I'd much rather save the spending for when I'm truly invested.