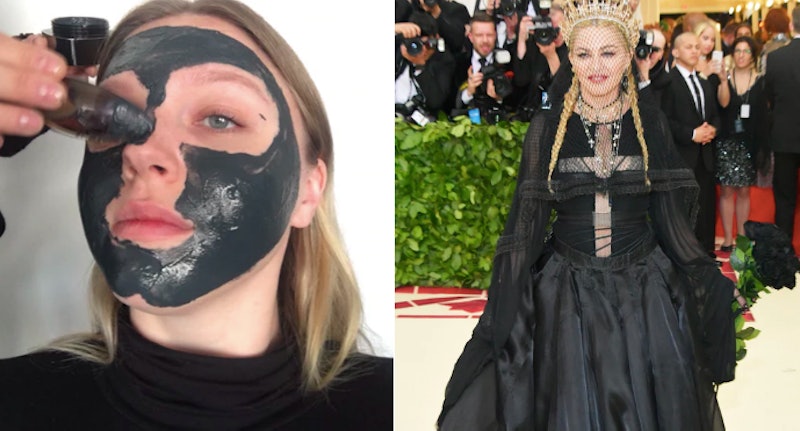 "I have to get to work early tomorrow, I have an appointment with Madonna's esthetician," is a thing I found myself saying to my boyfriend on a Sunday night as I put on my moisturizer. Getting the same exact pre-Met Gala facial that Madonna gets happens about as frequently for me as actually attending the Met Gala (AKA never), so I jumped at the chance to have an early morning appointment with Madonna's long-time esthetician Tarin Graham. Before Graham headed out to give Madonna her pre-Met Gala makeup treatment, she gave me an identical facial at the Bustle offices. I am neither Madonna nor attending fashion's most fabulous event of the year, but like any normal human, I appreciate any chance for an excellent skin treatment and/or to be Madonna-adjacent.

Graham started my facial with MDNA SKIN's Chrome Clay Mask. I leaned back in a conference chair and we chatted about all things Met Gala and skin care as Graham carefully applied the mask to my face. Graham tells me that Madonna's pre-Met Gala treatment would probably happen around 3 p.m., just before her makeup application. However, Graham says she's also been prepping M's skin all week long for the big event. This is the Met Gala after all, so that kind of preparation makes sense to me. We talk about all of this as we let the mask work its hydrating, plumping magic on my skin. I've used the Chrome Clay Mask myself before, but have never had it applied (or removed) by a professional. In any case (but especially when a pro is doing it), it feels glorious — cooling and soothing, but not drying at all.

Next, Graham carefully used the MDNA SKIN Rejuvenator's magnetic tool to remove all of the mask, and immediately my skin was in better shape than it was when I walked in. As someone who hasn't been prepping for the Met Gala for weeks, I had spent a good portion of the weekend drinking tequila and eating bagels. Needless to say, my skin needed some help, and this treatment did the trick and more.

After the clay mask was removed, Graham followed up with MDNA SKIN Eye Serum and Face Serum, both of which she worked into my face by using the MDNA SKIN Rejuventor's Infusion Head. I had never used this side of the tool (one side is the Infusion Head, the other is the magnetic side for removing the Chrome Clay mask), and I was amazed at the way it helped my skin absorb the product and how it lifted and plumped my whole face. The final step was MDNA SKIN Reinvention Cream to lock in all the products. The entire process maybe took 35 - 40 minutes, but I felt like my skin had been totally transformed. I left the conference room and my skin was glowing. Is this how Madonna feels every single day? I found myself wondering.

And the best part? This glow didn't fade away. Two hours later, my skin was still looking hydrated and glowing. Every time I expected to look in the mirror and the glow to be gone, it was still there. I thought about how Madonna gets this treatment multiple times leading up to a big event, and I immediately understood why even more than before. If I just had this treatment once and it lasted hours, I can only imagine how consecutive treatments would transform the skin.

Madonna ultimately arrived at the Met Gala in a look that was as on theme as it could possibly be. It also included a veil, a crown, and a cape, so it was initially hard to even focus on her skin. But, move past the all of this and you can see that hint of glow, and you can see the glow. In fact, the glow complemented the entire look, adding to the "holy" effect.

Sure, I might be watching Met Gala coverage from the comfort of my own couch while eating take out and Madonna is, you know, on the red carpet being one of the biggest celebrities in the world. But good skin is universal. And honestly a glow this good is just as satisfying while at home in sweatpants as it is wearing a crown on the red carpet. At least I think so.