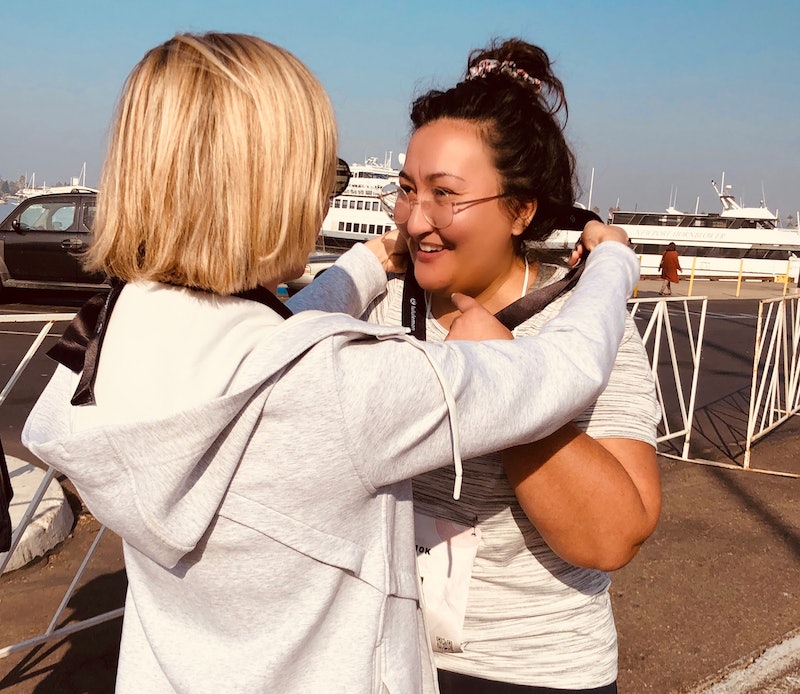 I can do hard things. That’s the mantra that boomed through my head as I ran my first 10K. I inherited the phrase from my coworker and fellow runner, Sara Tan — the person who encouraged me to start running at all. The night before my race, nervous as all hell, I texted Tan asking for a mantra. The request represented more than a desire for a simple string of words to repeat. It was seeking an act of legacy. An athletic blessing. She had trained with and ran with it, and so, maybe, in some mysterious way, it possessed power I could draw from, too. And as I ran the Lululemon San Diego 10K, repeating those words, I found myself recognizing them not as a motivator, but as an acknowledgement of truth. One mile, three miles, six miles in. As my legs ached and lungs burned, it wasn’t positive reinforcement: it was a declaration. I can do hard things. Each step forward, evidence.

Just six months ago, I couldn’t run more than a minute without a break. I’ve suffered from asthma for decades, and in many ways it’s discouraged me from embracing athleticism because, as any asthmatic can confirm, an attack is painful and scary. But it’s also vulnerable, and occasionally humiliating. Nobody wants to draw attention to themselves for the things they can’t accomplish, or have to slow down, or stop completely. So, frequently, I’ve found myself opting out of participating, rather than risking failure or embarrassment.

Needless to say, my bar was set low. When I first started, adopting None to Run, a 12-week running program for absolute beginners, I focused on the ultra short-term. The schedule encourages slow running and walking to prevent injury and ensure that participants develop their capacity gradually. According to the founder and former kinesiologist, Mark Kennedy, "instead of ending the runner’s first run in pain and completely out of breath, None to Run is all about completing the first run feeling like you could have run longer. Each run builds on the last. This builds confidence and consistency."

It worked miraculously. It helped me increase my lung capacity at a safe pace. It allowed me to focus more on my form. Most importantly, it allowed me to complete the program feeling accomplished, successful, and ready for the next challenge.

My finish time may not seem impressive to some. I finished closer to the tail end of the race, crossing the finish line when there just smatterings of people still cheering beyond the tape. But to me, I had landed on the moon. I accomplished something that months ago, I couldn't fathom.

When I started sharing my running goals with friends, I heard a lot of mixed reactions: people who felt too ashamed to run because they "run too slow," others who feel "too fat" to run — suggesting they were more concerned about being mocked than their actual physical ability. Some even mentioned that they'd never be "good runners," or "marathon runners," or "runners who win races." So, what was the point?

However, as one Lululemon Global Run Ambassador, Rob Watson, framed it: the athletes who finish a race toward the end accomplish a feat of their own. They may be slower, but their bodies and minds are working longer to keep moving and stay positive. It's not only a matter of who comes in first or last. Sure, at face value there will be a "winner" and a "loser." But the way I see it, every person on the course is facing (and overcoming) their own battle.

On that note, here are a few products that helped me train at my best.

Yes, the overwhelming, joyous "runner's high" is a thing — but so is soreness, especially as a new runner. Since I try to use OTC pain relievers sparingly, I found CBD to be a helpful way to mitigate sensitive muscles and joints. While CBD hasn't yet been evaluated by the FDA, I really enjoyed the Cool Stick because of it's easy application (similar to a deodorant stick!) and tingly, minty scent.

A Solid Pair Of Leggings

Nothing makes working out more fun than new, great activewear. I love wearing leggings for a run, but find that most pairs tend to slide down while being active. I hate having to constantly be pulling my pants up or adjusting them to keep them in place. Fortunately, this breathable pair stays in place, without feeling *too* tight.

Have I mentioned that training for a race causes a lot of pain and stiff muscles? While a lot of people prefer foam rolling, I preferred handheld massagers that I could use sitting or standing, post-workout. I kept two tools on hand: a large one for bigger muscle groups, like quads, and a smaller regions, like my calves or around my knees.

While the Joyride isn't designed for long-distance training, it was the introductory pair I used during most of my early runs — and it only felt right to wear them for my first race. (Plus, they're both super cute and filled with thousands of beads to make your run feel easier.)

While you can't (technically) buy this at a store, one of the best pieces of running advice I've been given was via Lululemon Global Run Ambassador Charlie Dark, who suggested writing myself a letter the night before my run. In my letter, I reflected on the journey that brought me there, and it gave me an opportunity to mindfully consider my hopes for the race, and what I was looking forward to next. I stuck my letter in my shoe, and read it after my race was completed. Yes, there were tears. It's a new tradition I'll carry with me through every race to come, and one that I highly recommend you try on your next (or first) race day.