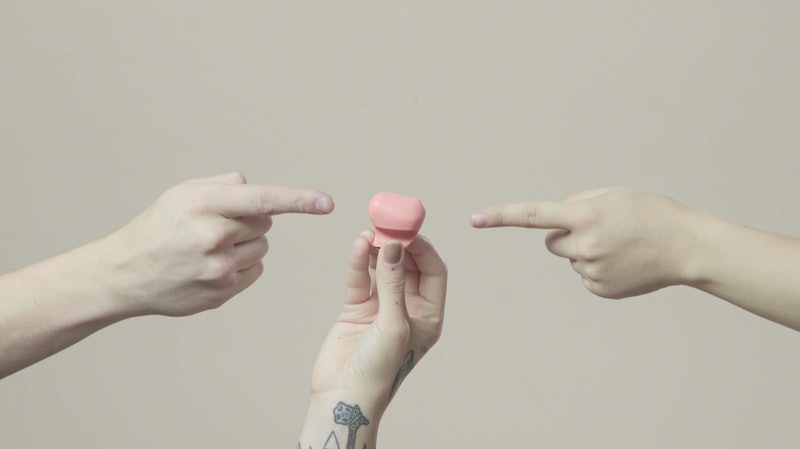 While I have no complaints about my sex life, I am among the majority of women who don't orgasm from intercourse alone. I don't view this as a problem, since there are plenty of other ways to make sure we're both satisfied, but I've still been curious to experience it. I've asked women who can do it to teach me their ways, but it seems to come down to basic physiology: I need clitoral stimulation. While my partner has tried to provide me with this during sex, it gets pretty complicated with so much other stuff going on. I wondered if the right toy could be the thing to change that.

The first thing that struck me about Fin was how unobtrusive it is. It rests between two of your fingers, and you can pretty much use your hand as you normally would, with extra vibration power. The first time I took it for a spin was by myself, and I actually used it over my underwear because it was so powerful. On the lowest setting, it was quiet enough to use in my parents' house, which I was very grateful for during the holidays.

Then came the moment of truth: I put it in my partner's hands. First, he used it to enhance digital sex. Then, once I was warmed up, we started having sex while he continued using it. Not only did I come during sex — I did at the same time as him. That was a mathematical stroke of good luck for us both, but as we kept using it, I consistently came before him. Why had I never considered this painfully simple strategy before?

While this wasn't the first time we'd used a sex toy together, I'd been hesitant to use one during sex for a few reasons. First, I didn't want to make him feel like he wasn't enough. Second, I was scared of giving the impression that I was just trying to get off rather than being in the moment. A past partner of mine had responded when I brought out a sex toy, "I want us to connect with each other, not a machine," which made me feel guilty about putting my pleasure above the "connection." Third, part of me felt like this wasn't the "natural" way to have sex, and that if my body didn't respond to "natural" things, that was my problem.

When we hear that "most women can't orgasm from intercourse alone" statistic, we get way too intimidated by "can't orgasm during intercourse" when the operative word is really "alone." Intercourse plus a handy finger apparatus, it turns out, is totally doable.

More like this
How To Do The Intimacy-Boosting Lotus Sex Position
By Laken Howard and Lexi Inks
I Never Orgasm During Sex. What Can I Do?
By Sophia Benoit
The Best Time To Date After A Breakup, According To Experts
By Bustle Editors
Are Quality Time & Physical Touch Love Languages Compatible?
By Lexi Inks
Get Even More From Bustle — Sign Up For The Newsletter