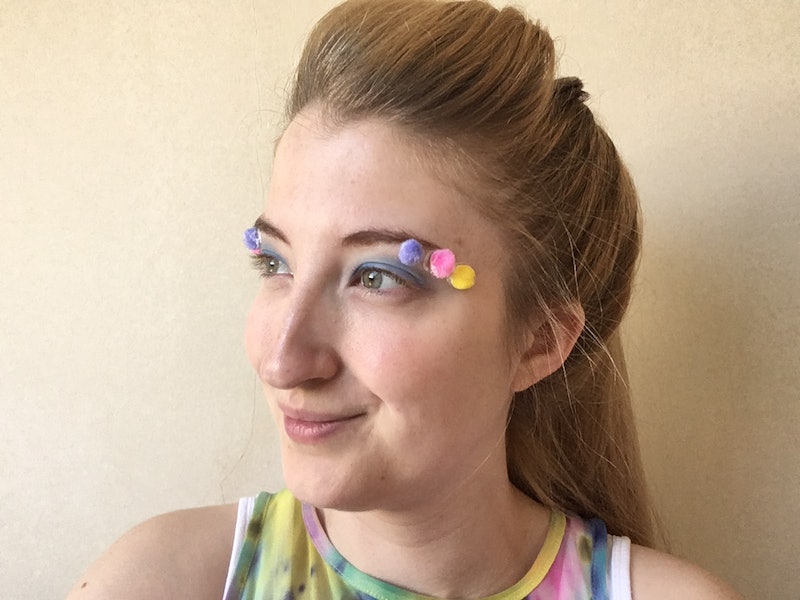 I'm a sucker for cute stuff, especially rainbow colored, fluffy cute stuff. So it's likely no surprise to anyone who knows me that I tried the pom pom makeup trend that's been doing the rounds on the internet.

As the name suggests, pom pom makeup is a trend that incorporates pom poms into your beauty look. Yep, I'm talking about good old fashioned pom poms you probably made art with at school, that are available from any craft store. If you're a '90s kid like me, pom pom makeup is sure to pluck a nostalgic chord deep within your soul: It's bound to remind you of rainy days spent indoors crafting with your friends or siblings, while Nickelodeon played in the background, when you only took a break from creating your masterpiece to make edible art out of your Dairylea Lunchables. Ahh, good times.

According to Allure, "MUAs on Instagram have been using the craft supply for eye makeup, brow art, lip art and even a colorful, crazy take on contouring, with the trend can be tracing back to November of last year." Folks on social media have created some stunning looks ranging from a black and gold sparkly pom pom eye look, to lips lined with mini pom poms. There appears to be no boundaries to the ways you can utilize pom poms in your makeup.

So I tried the pom pom makeup look to see how these fluff balls held up IRL.

I started off my look with "natural" makeup, AKA a touch of foundation, filled-in brows, and some blush.

I decided to go for an eye look, as I thought there was more scope to be creative, plus the eyes are the windows to the soul y'all. I wanted a fun colored canvas as the back drop for my kooky beauty look, so I chose a blue eyeshadow.

I used "Filter" from Lime Crime's Venus 2 Eyeshadow Palette for the backdrop of my look. I thought it would make my eyes pop and draw even more attention to my peepers.

I bought a pack of pom poms and I picked out all the tiny ones in colors that I thought might work well with my look.

I applied them along my brow bone using Lime Crime's Glitter Helper. I had originally wanted to use a few pom poms on each eye, but I found them tricky to work with and they took up more room than I'd originally anticipated.

On my first application attempt, I smeared a line of Glitter Helper along my brow bone and stuck the pom poms down.

But within seconds they had fallen off, so I took a different approach of applying Glitter Helper to each individual pom pom, then pressing them down firmly, one-by-one, onto my brow bone.

This method seemed to work and I felt satisfied that they'd stay put — at least for a little while! I was ready to give this fluffy look a test-drive in everyday life.

As much as I admire artistic beauty looks created by MUAs for photoshoots or for their own Instagram feeds, I often wonder how these avant-garde styles would really hold up in day-to-day life. So I was determined to carry out my day as usual.

I began my day by making my way to my friend's house to have a cup of tea and a catch up. The weather was absolutely glorious and I was very thankful, as I dreaded to think how rain would affect the sticking power of my pom poms. As soon as I'd left the house, I realized I had left my Glitter Helper at home, which wasn't ideal; I'd wanted to take it with me in case of any rogue pom poms.

My worries were soon forgotten when I spotted a couple at the end of the road. The lady in the couple seemed to momentarily forget she was crossing the road as she looked down the street in my direction for a few, very long, seconds. My eyes aren't so good with long distance, so she might have been baffled by my furry eyes or maybe something behind me had caught her eye.

I strolled to my friend's apartment and rang the bell. As I waited for her to answer the door, a woman appeared from the house next door and began making small talk with me — it would seem I've got one of those faces. She was talking about the weather when she suddenly interrupted herself and said, "I like those little boofs," while gesturing to my eyes.

My friend opened the door at that moment and said I looked summery and agreed with the lady. Before we disappeared inside, the woman told us that it's great to be unique, to which we genuinely agreed. My friend made us some tea to take onto the seafront, to make the most of the amazing weather — this kind of perfect weather occurs only a handful of times when you live by the sea in the North of England — and she explained how she liked that my pom poms looked as if they were in a gradient. I told her I had some blue pom poms that would have matched my eyeshadow, but I didn't want to come across too matchy-matchy.

We left my friend's house and made our way to the promenade. I actually didn't feel so weird wearing pom poms on my face, perhaps because there have been many fluffy fashions in vogue in recent years or because I'd color co-ordinated my pom poms to my top. I love pastel colors and anything that's remotely kawaii or adorably eclectic, like some of the street fashions you might see in certain areas of Tokyo. So I might have felt subconsciously within my comfort zone, even though I had crafting accessories stuck on my face.

It may have been the gorgeous weather that was keeping my spirits high and stopping my thoughts from wandering into the realms of the self-conscious, but whatever it was, I was loving life!

After we finished our tea, we both headed to work. I was a little concerned that my glasses were going to disrupt my pom poms, but they stuck true. I was very impressed with my Glitter Helper.

I had to pop out to the post office and although I got a few inquisitive looks, nobody mentioned my quirky eye makeup, not even the cashier who served me.

Blame it on the heat, but late in the afternoon I was shattered and had to have a little nap. This proved quite difficult with my pom poms and I had to shield them from the sofa.

In the evening, I picked my dad up to go swimming together. Unfortunately, just prior to meeting him, my glasses (that I also use for driving) knocked off one of my pom poms. I didn't have my Glitter Helper with me so I couldn't stick it back on. Despite the mishap, my dad thought it was a very brave look.

Sadly, I knew I'd have to remove my makeup before hitting the pool, as I presumed my pom poms weren't going to last in the water.

My Take On The Pom Pom Trend

I initially thought I'd feel seriously self-conscious wearing pom poms on my face, but I felt a lot more confident than I imagined. It could have been the pastel color combo and the fact that I liked how they matched my top, but whatever the reason, I'd often find myself feeling oddly cool and fashionable.

Of course, there were moments when I thought I looked like I'd been rolling around on a craft mat, and that others would think this too, but I kept feeling an IDGAF wave of confidence wash over me every so often. Considering how some beauty trends I've trialled in the past have made me feel, this was a surprising, yet pleasant change.

I would totally recommend pom pom makeup to anyone who likes to stand out from the crowd, anyone who enjoys cutesy fashion and beauty, or festival goers. I could imagine this look fitting right in at Coachella, paired with faux fur pom pom sandals and a Clueless inspired faux fur trim crop top.

Pom pom makeup has reinforced to me that if you want to do something, you should just do it. You want that extra espresso in your coffee? Go for it. Want to quit your day job and follow your dreams? Give it a shot. Want to feel ridiculously adorable and nostalgic, but oddly relevant at the same time? Stick pom poms on your face.