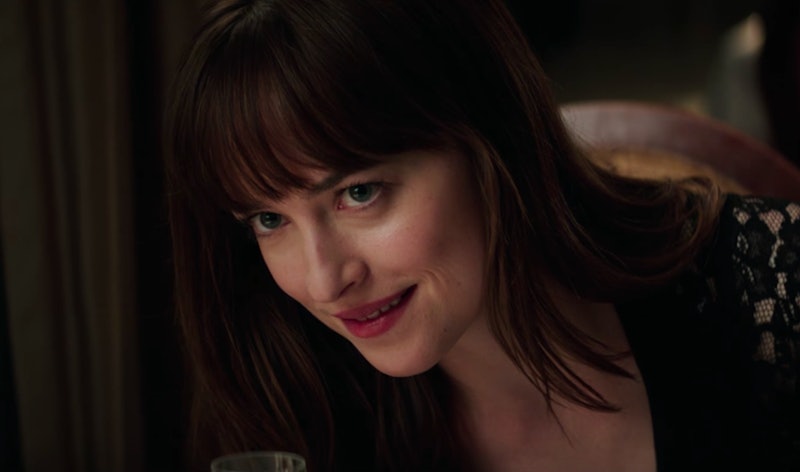 There are a wide variety of reasons one might end up walking around the snow-covered streets of New York City, attempting to find a store that will sell you tiny balls to shove into your vagina. Perhaps you are a writer who feels like the world needs to know more about Ben Wa balls, the sex toy featured prominently in Fifty Shades Darker. Perhaps you are a staunch sexual health advocate. Perhaps, despite the fact that you are 34, married, and have to use special prescription toothpaste so that your teeth don't ache when you drink cold beverages, you still like to think of yourself as "adventurous."

Or perhaps your parents did not teach you the difference between good attention and bad attention when you were little, primarily because they were always too busy either arguing or having makeup sex. Perhaps you used to live a very sexually freewheeling lifestyle as a single person — a lifestyle that wasn't actually satisfying in any of the major important ways, like orgasms or having your text messages returned in a prompt fashion — but now that you are monogamous and mostly know what you do and don't like, you feel like kind of a nerd. Perhaps, like me, you are a multifaceted being who fits all of these descriptions. A lot of things can push a person and her vagina to the point where they feel like they have to make an over-the-top gesture to show that they're still vital and with it.

What I'm trying to say is, my parents are now divorced, my teeth hurt, and even though I currently have some sex beads stuffed into my vagina, I still feel uncool.

What the hell am I going on about? Great question! In Fifty Shades Darker, the Fifty Shades of Grey sequel that hits theater today, there is a scene that involves Ben Wa balls, also known as Kegel balls, though they are never referred to by those names in the film (spoiler alert for any of you who read through several hundred words of this essay, but don't want to know any details of the film). Instead, Christian Grey simply offers some chunky beads to our fair heroine, Anastasia Steele, who assumes they are for the butt. Christian assures her that they are not for the butt at all, and to prove this, inserts them into her vagina. They attend a masquerade ball, she finds having these bead thingies inside her to be very stimulating, and eventually they bang. You know, standard date night stuff.

The beads/balls also make an appearance in the first book in the series, in which Ana wears the balls briefly while being spanked, rather than while talking to Christian's parents while at a party. However, neither story really goes into what the hell they are, so I will.

That part's easy to explain. What I cannot explain is why, after having the Ben Wa ball scene from the film described to me, I began to laugh maniacally and said, "I have to try those." Though I appreciate that the Fifty Shades movies and books give many people a safe space to explore and experience new sexual ideas (though they also get a great many of those ideas wrong), I think they also can lead to a bit of a sexual arms race within the culture. While I was glad about the way Fifty Shades mania allowed more people to be more frank about their sexual desires, some discussions of the films and books seemed to come with a subtext: Can your sex life really be that satisfying if it doesn't involve Ben Wa balls and sexual contracts and swooning, creepy millionaires who don't ever seem to actually work? In the aftermath of the first film, wading through those "Fifty Shades transformed my sex life" pieces, I spent more time wondering about that — and feeling self-conscious about my answers — than I should have.

This time, I wanted to get on the front lines of that arms race. I wanted to be able to go into any and all discussions with hard-won personal knowledge about how I, personally, felt about sticking some giant beads into my yankee doodle.

And since Ana got so aroused trying them out while just walking around a costume party (to me, one of the least erotic settings on earth), I committed to giving my balls a run in an unsexy situation, too: while I ran some lunch errands. Though this may sound like next-level perversity to you, many people do wear Ben Wa balls while going about their daily lives, for their vaginal muscle-toning properties, if not for sexual reasons. People sitting next to you could all be wearing Ben Wa balls right now, and you would have no idea! Maybe you should ask them! (Please don't ask them.)

Though I was opting for a solo run, some folks do wear Ben Wa balls while engaging in vaginal penetration. But looking at the size of the balls, I could not make sense of the geometry of the situation, especially since I often have trouble shoving a plain old human penis up there comfortably. It made images of the junk-filled, rarely-cleaned trunk of my car flash through my head. So I decided to go it alone. Hey, it worked for Ana! Is going to the deli and deciding between wheat and rye as sexy as a costume party? I think so (I really hate costume parties).

After I finally procured some Ben Wa balls, I lubed them up (unlike the saliva used to lubricate in the movie, experts recommend using a lubricant), popped them in, and stood up. I had purchased two weighted balled with a cord, meaning that within each ball was a small weight that kind of jingled around within the larger ball. In theory, this is supposed to cause your vaginal muscles to grip the ball, which can help tone them; it also feels pleasurable to some people. To me, it felt like the bells from The Hunchback of Notre Dame were ringing inside my vag every time I moved.

The sensation was so unfamiliar that my brain rushed through a million more common vaginal sensations to try to make sense of it. Did I have to pee? Did my vagina hurt? Was I... queefing? The answer to all, of course, was no; I just had some balls rattling around in my underpants.

As I explored the city streets with my new friends the Vag Bell Twins, I tried to tense my vaginal muscles to see if I felt anything sexy. Wearing the balls didn't feel actively bad, which frankly surprised me a little — my vagina often puts up a lot of resistance to sexual penetration, and those balls looked HUGE. Getting them in and keeping them in comfortably felt like a triumph.

But it didn't feel like anything special, either. When I sat down to eat my sandwich, I forgot they were there entirely; I only remembered after I sat up and once again felt like my vagina was an attic with a confused bird trapped in it, going nuts and flying into all the windows.

When I got back home, I took the balls out. They had not made me any hornier, though I was proud of my vagina for trying something new. She too is 34, married, and no longer spending wild nights out with dudes who find living in a van to be "you know, really freeing, man." I was glad that she — and I — got to try something a little weird before I settled in to spend the night indulging pleasures far too perverse to be included in any Fifty Shades movie, like sitting in the dark and watching Dawson's Creek while picking dead skin off my feet.

If watching the Ben Wa scene (or any other) sparks your imagination and leads you to explore your fantasies in exciting, safe, consensual ways, that's obviously wonderful. But if you don't burst into operatic orgasms from putting some jingle-ball-feeling thingies into your Queen Clarisse Renaldi, there's nothing wrong with you. There's no right or wrong way to enjoy sex, and no reason to feel shame if something isn't a turn-on for you, or doesn't give you the pleasure that it gives others. Your vag, much like Ana Steele, is on its own journey of adventure and self-discovery. And if what it self-discovers is that it likes things the same way you've always done them, hey, that's a perfectly acceptable shade of grey.