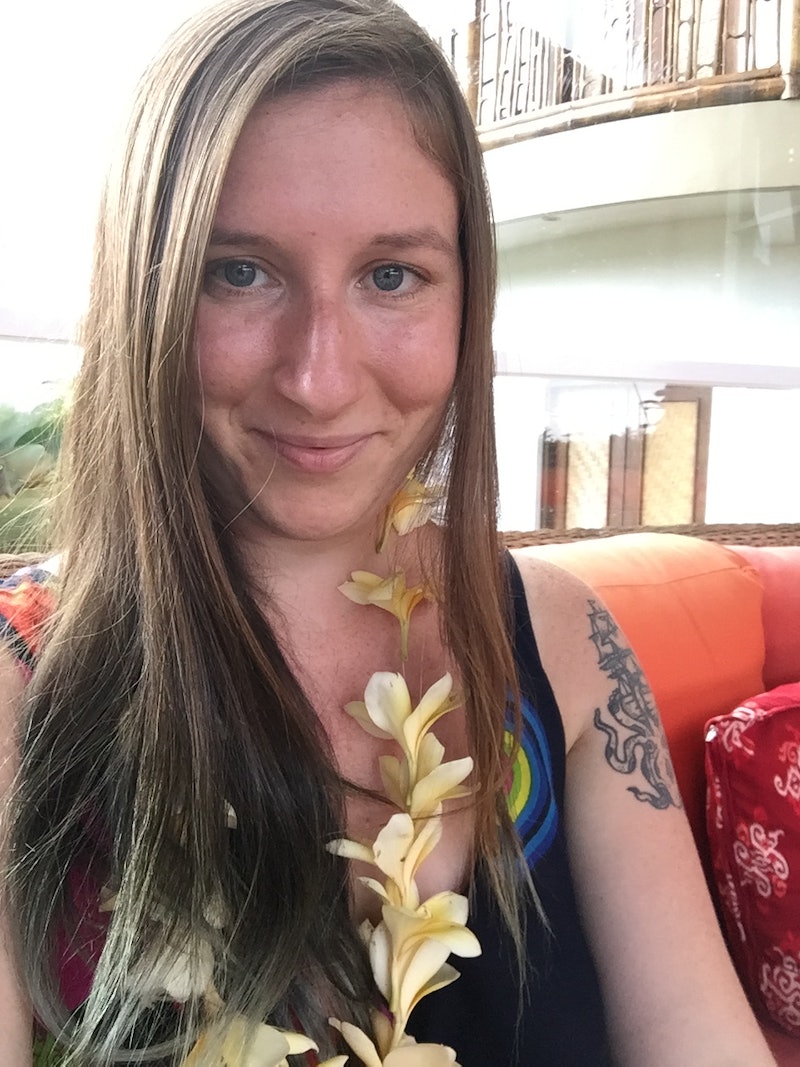 When my partner invited me to spend a month with him in Bali, where his business was temporarily relocating, I imagined I'd experience the typical Bali awakening: I'd do yoga until my inflexible body was head-standing and bird-of-paradise-ing all over the place, eat so healthy that I'd begin sweating kombucha, meet spiritual wanderers from all over the world who would stop me in the street just to impart their words of wisdom, and come back with an aura so pure you could see light shining out each of my pores.

Unsurprisingly, my goals proved a little overambitious. About halfway through the trip, I had to face it: Things weren't going as planned. I could not for the life of me sleep through the night in the Canggu villa we'd rented, I seemed to be allergic to the entire island, my Lyme disease was in a nonstop flair, and I'd somehow managed to get a cold on top of it all. I could barely function, let alone soul-search, and sadly, no other wanderers had met my acquaintance.

I thought about just leaving, but I was not about to give up, mainly because yet another 20-hour series of flights seemed overwhelming. What I needed instead, I decided, was a retreat. Wasn't that what people did in Bali? A friend had recommended one to me, but I wanted something more authentic. I was tired of going to yoga classes taught by white people and eating in restaurants serving spaghetti with tomato sauce. Then, I stumbled across the website for The Floating Leaf, a center in Sukawati, Bali that offers a shamanic healing retreat. These retreats include two sessions with traditional Balinese healers called Balians, an herbal medicine class, and a purification ritual in the famous Tirta Empul waters in Tampak Siring.

"We have worked with dozens of Balians and healers in Bali over the last couple decades and have found a handful that we feel are the most exceptional and gifted for a variety of treatments," its description read. "We can schedule you with particular healers that excel in a modality that may benefit you. We must be discrete and discerning about the healers' personal information and location as their primary duty is to their community." That sounded pretty authentic. Plus, online reviews described it as "life-changing," and online reviewers never lie, right? I booked three nights.

The staff at Floating Leaf greeted me with a welcome drink and foot bath, which made me feel way classier than I am, as they explained my schedule to me: a shamanic healing the next day, another one plus an herbal medicine class the following day, and a purification ritual the last day. The next morning, I headed to an ashram on the outskirts of Sukawati to meet with the first Balian.

When I climbed up the steps to his wooden sanctuary, the first thing he did was throw purifying water on my head. I let out a yelp. What a great start we were off to. I'd just had a keratin treatment, and I still couldn't get my hair wet for another two days. When I explained my little freakout, he asked me how much the treatment cost. I thought he'd judge me for spending so much money on my hair — it must seem superficial to such an enlightened person — so I just said, "It's OK, I think it'll be fine." He asked again. "About $300," I sheepishly admitted. "If there's a problem with your hair in a week, come back and I'll give you $300," he said. "I want you to have only good feelings here." Woah. This guy was legit.

"You have pain in your back, yes?" he asked me. I did. "Right here?" he said, pointing to his tailbone. "Yes!" It was exactly there. "There are no entities there; it is just stress," he said. Whew! I was glad to hear my spine was not possessed. "And you have pain here too, right?" He pointed to his knees. "I do!" Then he looked at me closer, as if he were scanning my internal organs.

"On the outside, you don't appear like anything's wrong," he said, "but there is something stuck in your heart." I supposed that's a weird thing to get told a lot, but I get told that a lot. Everyone from my acupuncturist to some psychic a hypnotist I once saw consults has said I have a "closed heart chakra." I've been having heart palpitations ever since I developed Lyme, which I imagine is related to this chakra problem in some weird, complex way science has yet to understand. But help was available! "I'm going to open your heart at the end," the Balian told me.

But first, he had some information to impart: I'm a good communicator (I'd hope so given my profession), I tire easily (understatement of the century), I don't have cancer (whew!), mid-2020 is a good time for me to write a book (I'm trying to get a book deal now, so let's hope), I'll lead a retreat by 2023 (believe it or not, "you'll lead a retreat in a few years" is another thing intuitives keep telling me), and I'll have a house outside the U.S. within twelve years (color me intrigued).

He asked if I had any questions, and you don't turn down a Q&A session with a clairvoyant, so I asked why I was always walking around fuming for no particular reason. "Your energy is like muddy water," he said. "If you fill the glass with pure water through yoga and meditation, the dirt will spill out." Sounded reasonable. I also asked if I had trauma in my life I hadn't dealt with. "Big trauma, no," he said. "But sensitive people have lots of little traumas — things they see or hear that get stuck in their hearts." Made sense, especially in light of the whole heart chakra issue.

He then put his hand above my heart and had me hold my breath as he said a prayer to open it. Some air escaped my mouth as I held back laughter; he was wiggling his hand and it tickled. He told me not to worry — he'd accounted for that since he knew it'd happen. Of course he did.

While I'll have to wait a few years to see if the Balian's predictions all come true, what he said about the present was impressively accurate, and his healing ritual seemed to do something for me. After a yoga class that night, my partner called me on Google Hangouts. "You look like a newborn baby!" he said. I felt like one, I suppose, minus the baldness and diapers.

The next evening, I saw another Balian on the resort grounds. I expected another fortune-telling session, but his method was different. First, I lay down on a massage table while he performed reiki, an energy healing method where someone moves around you to balance your chakras. He told me to quiet my mind while he worked, but my mind was having trouble tuning out the buzzing of all the mosquitos flying around me and occasionally nibbling at my legs. Given this, he was impressively productive: He identified and removed an energetic block in my head — no wonder I'd been having such debilitating brain fog and headaches — and explained that when you think a lot, it's like speeding in a car: You eventually run out of fuel and produce lots of exhaust. He also helped expand my aura so that my energy reached further outside of me — a useful trait in most professions, I'd think.

Afterward, he finally gave me that Bali wisdom I'd been craving. "People say 'life isn't fair,' but it is," he said. "We all choose our blueprint before we come here. It's up to us how we get there, but it's already determined where we end up." It was certainly a more optimistic way to look at things. "But we all get the chance to pass the test and have good karma in this life," he said. "And if we fail, we get to do it again." That sounded pretty fair, indeed.

As I skipped back to my room feeling on top of the world (or at least on top of this particular world I chose to incarnate in), I found myself thinking such thoughts as, "How nice that I get feet!" I played The Weeknd on Youtube and danced as I packed my suitcase, hoping nobody would see me awkwardly shuffling across the floor through my big windows.

Before I returned to Canggu, I stopped by the Tirta Empul, which is believed to protect and heal all visitors it cleanses. Everyone from the first president of Indonesia to Obama has attempted to soak in its spiritual properties. Ensconced inside the Hindu temple grounds was a small pool with a line of fountains leading into it. I was instructed to duck myself under each fountain while thinking about what I wanted from the water. I asked it to purify my mind, body, and soul (real original, I know).

On the ride back, the Floating Leaf employee who drove me put on 90's alt rock, and I sang at the top of my lungs, not afraid to be heard. As we spoke, I felt less inhibited, less constrained, more exuberant. I was exhausted when I got back to the villa — I'd had to leave for the fountains at seven to beat the flood of people who arrive throughout the day — but I felt bursting with joy and energy. When I looked in the mirror, I couldn't believe how clear my skin looked and how soft my hair was. The following week, I started sleeping decently enough to not feel like a zombie in the morning. I'd had a spiritual detox of sorts. I'd gotten to be the Eat Pray, Love cliché after all. And I'm happy to report that my hair was not ruined in the process.