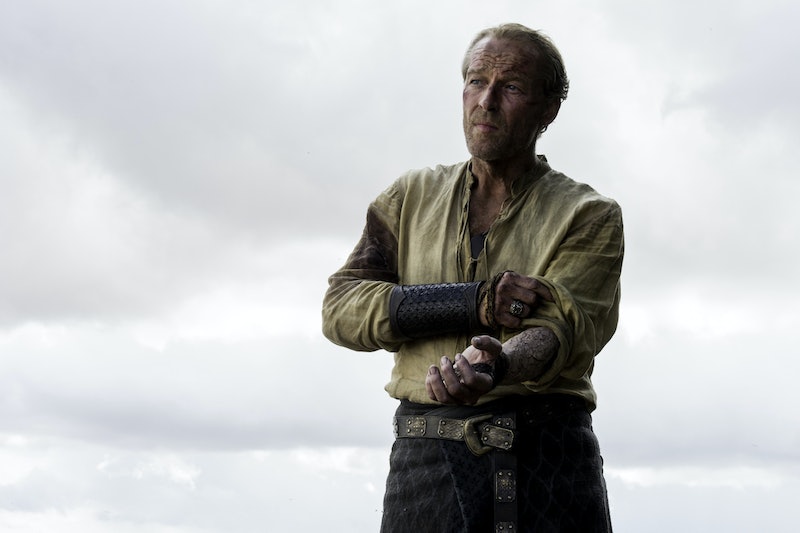 The last time Game of Thrones viewers saw Ser Jorah, he promised his queen he would return to her as soon as he found a cure for his deadly greyscale. Given that there is no known cure for greyscale, it seemed likely the loyal knight would either die off-screen or disappear, at least until Season 8. In a interview with Stuff, the character's portrayer Iain Glen may have revealed Jorah is in Season 7 after all. If Jorah is set to appear in Game of Thrones Season 7, then that begs the all-important question: Will the exiled knight finally return to Westeros?

"I've always enjoyed playing Jorah. It's been a role that's been good to me so far. There's quite a high death count in 'Game Of Thrones' and they don't blanch at removing favourite characters. They just get rid of them in a brutal way. My end may well be close but so far I'm doing OK."

The actor is careful not to come straight out and confirm he's appearing in Season 7, but it certainly sounds like he spent some time playing Jorah for the upcoming season. Now, if he did, then Jorah may be headed to Westeros in search of a cure. Leaving him wandering around Meereen would isolate the character during a time when the show is accelerating the story. There's really no time for side quests at this stage of the game.

In January, Game of Thrones fansite Winter Is Coming reported Glen was spotted filming scenes in Iceland. If Season 7 spoilers are to be believed, this could mean Jorah is back in the North for the first time since he was exiled by Ned Stark. Before he met Daenerys, Jorah's primary goal was to return home, and seeing him in Westeros would be rewarding for fans of the character.

It would also open up a number of possibilities about what role Jorah will play in the final two seasons. If he finds a cure for his greyscale, then he would naturally return to Daenerys' side as she commanded. However, if he's unsuccessful, he may join an unexpected crowd of characters.

Jorah's young cousin Lyanna Mormont has pledged House Mormont to Jon Snow. As an experienced knight and fighter, Jorah could be instrumental in the battle against the white walkers. It would be bittersweet if Jorah never reunited with Daenerys, but seeing him follow in the footsteps of his father, the late Jeor Mormont, former commander of the Night's Watch, would not only make sense, it would allow Jorah to return honor to his family's name.

No matter what the future holds for the noble knight, Glen has at least given fans hope that there's still more of Jorah's story to come.