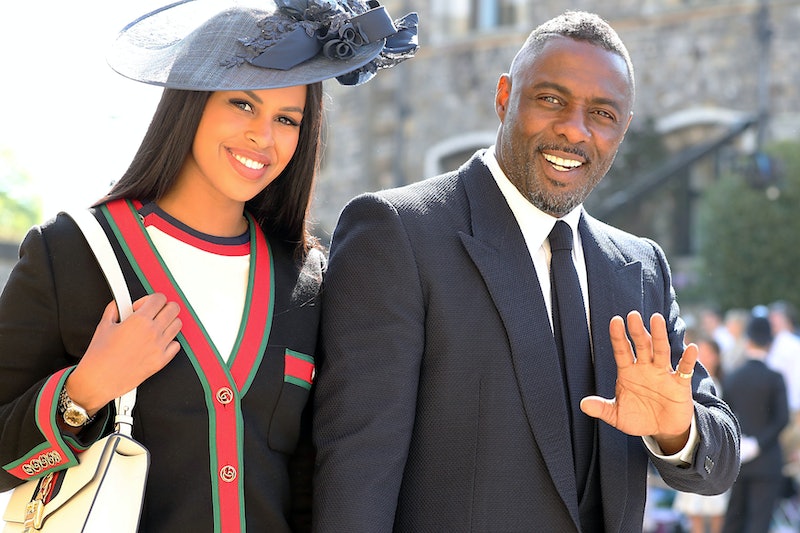 If it's true that those who laugh together last together, Idris Elba and wife Sabrina Dhowre seem destined for a lifetime of happiness. Among Dhowre's qualities that made Elba realize she was "the one," the Fast & Furious Presents: Hobbs & Shaw villain cited his now-wife's ability to make him laugh, in a 2018 interview with People. “She makes me happy. She makes me celebrate my successes and when I’m not too sure about stuff, she makes me think,” he added.

The 2014 Miss Vancouver Pageant winner's sense of humor was on full display in the very first Instagram photo of her and Elba that she posted in March 2018. To accompany the pic in which she's giving her man a kiss on the cheek at The St. Regis Kuala Lumpur, Dhowre wrote of People's reigning Sexiest Man Alive: "Me: Did you swallow magnets babe? Because you’re really attractive 😂"

Last September, she had more jokes, sharing a hilarious video of Elba showing off his dance moves in a parking lot. "This is why I love this man 😂," she captioned the IG post. It wasn't a huge surprise, then, when both agreed that Dhowre is better dancer of the two, in a joint video for British Vogue in June. (Side note: the Elbas were the first couple of African descent that British Vogue featured on the cover.)

In the British Vogue interview, Elba recalled the night they met at a jazz bar in Vancouver where he was in town to film The Mountain Between Us. As the actor revealed to the magazine, their eyes locked, and it was “love at first sight” with his wife whom Elba has nicknamed "Sabbi."

During a July 30 appearance on ABC's The View, Elba elaborated on their fateful meeting. “I went out on my only day off, true story, it was a Sunday night... went to this party, and there she was,” he said on the daytime talk show. As he later continued, “I went to a party called Slow Jam Sunday... and there she was. The rest is history.”

Indeed, the pair made their first public appearance together at the Toronto International Film Festival in September 2017, and, after a whirlwind romance, Elba proposed to Dhowre at a cast and crew screening of his film Yardie in February 2018.

The following year, Elba and Dhowre wed in a stunning Marrakesh ceremony in April 2019. The location, they later explained, celebrated their mutual African heritage. “My family is from east Africa and Idris’s is from west Africa, so we thought it would be fun to meet somewhere in between,” Dhowre added to British Vogue. (The magazine noted that Elba's family hails from Sierra Leone and Ghana (via Hackney), while his wife's is from Somalia (via Canada).)

“We’ve been literally inseparable since we met,” Elba said on his wedding day in Morocco, per British Vogue.

Fast-forward a few months, and the honeymoon still isn't over. “I’m actually the happiest I’ve been in a long time.” he added to the ladies of The View.

The feeling seems to be mutual for his new bride as well. Apparently laughter is the best medicine for a happy marriage, too.

More like this
Hailey Bieber Just Responded To *That* Viral Met Gala Moment
By Radhika Menon and Sam Ramsden
Dixie D’Amelio & Noah Beck “Love Each Other” Despite Breakup Rumors
By Julia Emmanuele, Jordyn Tilchen and Grace Wehniainen
Who Is Nick Cannon Dating & How Many Kids Does He Have?
By Jordyn Tilchen and Radhika Menon
Adam Devine Hilariously Let Everyone Know He’s *Not* Accused Cheater Adam Levine
By Brad Witter
Get Even More From Bustle — Sign Up For The Newsletter