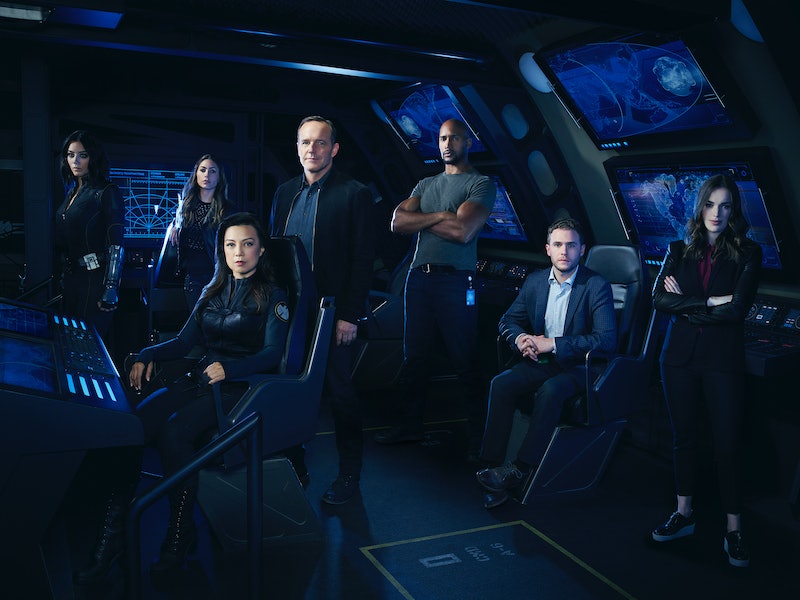 Matthias Clamer/ABC
By Jefferson Grubbs
May 18, 2018

Spoilers for Avengers: Infinity War ahead. It was the *snap!* heard 'round the world… or was it? Marvel Cinematic Universe fans have been wondering how the fatal finale of last month's Avengers: Infinity War would affect the franchise's small screen spinoff — or even if it would. How does Agents Of S.H.I.E.L.D. connect to Infinity War? Will the so-called "Snapture" that took the lives of so many big screen heroes have ramifications for Coulson & Co.? Or does the TV series plan on ignoring that particular development?

First of all, the good news is that viewers will have time to find out if and how S.H.I.E.L.D. plans on addressing Thanos' victory: the on-the-bubble drama was finally and officially renewed for Season 6, according to TV Line — it will air in Summer 2019 for an abbreviated 13-episode run. So no matter what happens in May 18's Season 5 finale, the show will have to address the events of Infinity War in one way or another by the time it comes back for Season 6… right?

The ABC series has already nodded to the record-breaking film in a couple of subtle ways, alluding to both some chaos in New York City — presumably the Black Order's attack on Doctor Strange — as well as Thanos' impending invasion of Earth. Surely the writers wouldn't be seeding these Infinity War references if they then planned to totally ignore that film's climax.

If the show did balk at portraying the Snapture, it would be understandable. It's harder to suddenly write off half the main cast of an ongoing series than it is to temporarily kill some characters in a movie everyone knows is getting a sequel. And S.H.I.E.L.D. has always had a tenuous connection at best with the larger MCU, with the show occasionally referencing the movies and never the other way around. Maybe this cataclysmic event is what it finally takes to drive Marvel's movie and television productions apart for good.

Not to mention the fact that the S.H.I.E.L.D. writers didn't even know if they were getting a sixth season yet when they were crafting the Season 5 finale. "Right now, we're writing a series end," executive producer Jeff Bell told Entertainment Weekly, "because as far as we know, this could be it." (Indeed, the upcoming final episode does bear the rather blunt title of "The End.") If they were planning an episode that could have served as a satisfying capper to five years of storytelling, would they really have chosen to end it with half of their beloved characters dissolving into ash?

Of course, fans know never to take the word of someone working on a TV show at face value. (Remember that time when Jon Snow was definitely dead omg you guys?) And if Season 5 does end with the snap, then that's where Season 6's delayed start date becomes intriguing. If the show had returned in December again, it would have had five full months of episodes to air before Thanos' victory is presumably undone in next May's Avengers 4. But a summer debut means that the Infinity War sequel will already have premiered, and any characters who vanish in the Season 5 finale can return good as new right at the beginning of the Season 6 premiere.

There's another way S.H.I.E.L.D. could avoid the ramifications of Infinity War altogether, and effectively separate itself from the larger MCU while not blowing up any of the continuity that has come before. Viewers already know that the team is trying to change their timeline by averting the catastrophe that caused the world to end in the future they visited earlier this season. If they're successful, that could effectively create a new timeline… one where Thanos' snap didn't happen at all.

With the MCU starting to explore the concept of the multiverse, the Season 5 finale could be about to spin S.H.I.E.L.D. off into its own little pocket universe, where it can operate freely and independently of the feature films, and without having to cull half of its beloved cast members.